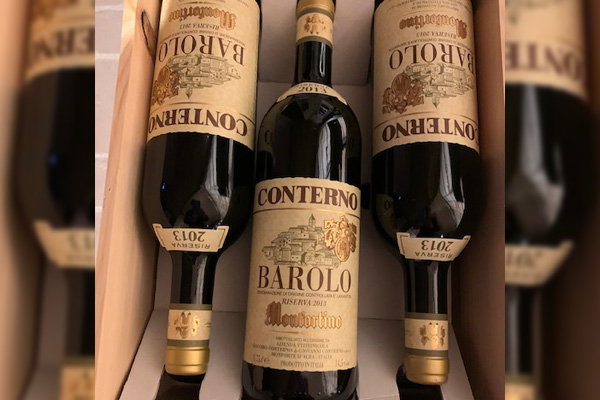 Time of the Year to reflect back on the wines you enjoyed most during 2019. There are so many Top 10 wine lists out there for your consideration. They usually range from good values to the esoteric to super expensive. In these days of record high prices for “trophy” wines it is becoming something most special to have opened and to experience some of these rarities as they usually instead go to an auction. Your scribe was fortunate to try so many cherished bottles during the past year. Some highlights include outstanding aperitif bubbles in best format of magnum with 1990 Pol Roger, 1990 Dom Perignon, & 1976 Krug Collection through dramatic digestif sipping of 1967 Chateau d’Yquem, 1966 & 1963 Vintage Ports, 1939 Rose Muscat Gurzuf vine The Massandra Collection The Crimea from Sotheby’s, 1863 Taylor Single Harvest Pre-phylloxera Tawny, and 1827 Madeira Bual Henriques & Henriques. Lots of exceptional white and red table wines with appropriate food pairings included historic 1990 & 1978 Hermitage Blanc J-L Chave and 1990 Clos St. Hune Trimbach; 1990 Rhone: Cote-Rotie La Moulin Guigal, Hermitage Rouge J-L Chave, & Chateau Rayas Chateauneuf du Pape; 1990 now opening up red Burgundy: DRC, Dujac, Rousseau, and Vogue; 1989 Haut-Brion, still remarkable rich 1982 Bordeaux (such as Mouton, Grand Puy Lacoste, and Gruaud Larose) and surprising old style California cabernets led by excellent 1991s J. Phelps Insignia & Mondavi Reserve and a wonderful 1974 Mayacamas magnum. Any of these would be worthy candidates for a Top 10. However also enjoyed so many treasures from Italy in 2019 including 1988 Masseto, 1988 Sassicaia, 1985s Brunello from Soldera Casse Basse & Biondi-Santi Riserva to fond memories of 1968 Taurasi Riserva Montemarano from Mastroberardino. In the end decided to go with only one meal and all Nebbiolo wines for the summit of my 2019 wine and food experiences.

Fortunate to sit next to Maria Teresa Mascarello (MTM) of Bartolo Mascarello (BM) at this October 12 dinner and to receive her valuable knowledgeable insights. We liked the Rinaldi flight so vibrant fresh with high acidity (especially 1989) but preferred the balance of 1971 but MTM says “too young”. First flight of BM great with 1990 charming bouquet (1989 usually a better a year) which MTM says “is ready to enjoy now with perfect balance and softer tannins” almost Burgundian styled while 1986 more Bordeaux-like structure with younger stronger tannins. 1986 opens with airing in the glass and “will develop well”. Both grand format BM 1958 & 1955 are sensational mature yet still fresh made by her father and grandfather. “Recipe is still the same every year traditional in making 1000-1200 magnums.” MTM “would have the 55 on its own without food because it is a joy with soft tannins.” 1958 perhaps more delicate and refined but drying out a little bit. 1955 has more depth of fruit left and more acidity and MTM loves the “smoky nose”. The Giacomo Conterno flights show a more powerful rich style compared to the lighter elegance and finesse of BM. Depends on the Nebbiolo style you prefer. All producers have done an outstanding job in letting the terroir of Barolo vineyards sing brightly in its many complex genres. MTM prefers the somewhat earthy 64 (improved and cleared with airing) and “believes the balance of lively acidity and tannins to be the key for best Barolo” while 67 has a touch of VA (some sommmeliers preferred this so must have been bottle variation) and 61 most complete. Excellent Zalto Barolo glasses being used here helps a lot. Monfortino is a very special unique vineyard from Cascina Francia and all three of these vintages 61, 58, and 55 are truly majestic putting a smile on your face. The plethora of delicious white truffles with every course didn’t hurt either. Roberto Conterno jokingly said that the host “for 2 years has been annoying us with communications and visits to make sure this dinner is properly set up.” Our generous host of this remarkable event so aptly put it all into perspective stating that “wines that make me happy are the best wines – not 100 pointers!” I heartily agree. Very happy 2019 indeed.

Ask Sid: What about US Tariffs on European Wines? 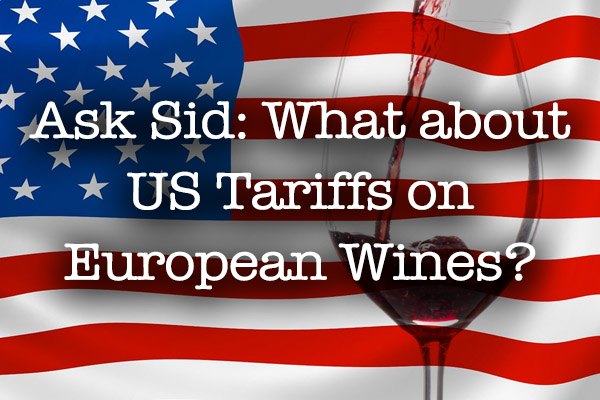 Question: What is this concern about surcharges on imported European wine all about?

Answer: Yes there is a big concern brewing about the imposition of increased tariffs on imported wines (as well as cheese, olive oil and other items) coming from the European Union. There was a 25% levy applied in October 2019 but only affecting those from France, Germany, Spain & United Kingdom (not Italy) but being exempt if over 14 degrees alcohol or over 2 liters in size.  Most of this increase so far has been absorbed by importers and distributors rather than resulting in a significant price raise for the consumer. However, in mid-December a very much expanded list with the potential for a 100% tariff was announced as being under consideration. This definitely would have a big impact now including Champagne plus all European wines coming to America. This has resulted in wide spread worry and developing opposition throughout the wine industry. Lots of detailed articles appearing recently in Wine Spectator, NY Times, Vinepair.com and similar publications. We are all closely watching to see whether or not this onerous tariff will be implemented. If it is there likely will be a disappearance of your favourite European wines from the local wine shop in your State. Will also affect Canada and other regions in the world on a demand/supply basis. Liquor Boards in Canada and other countries import directly from Europe so there prices should not be affected and may become even more competitive. However their list of wine choices from Europe is really quite limited. Many high end wine buyers and wine clubs (like IWFS, Bordeaux, Burgundy, and the like) legally import older vintages that are presently available in the USA so they should be greatly affected. Perhaps it could result in regions outside USA seeing more of these European wine treasures being available and providing an opportunity to import more product directly from Europe. Where ever you live be sure to monitor developments of this situation closely as it may affect your future wine purchases more than you think.

Does Montrachet Still Merit The Top Rung on the Hierarchy of White Burgundy? 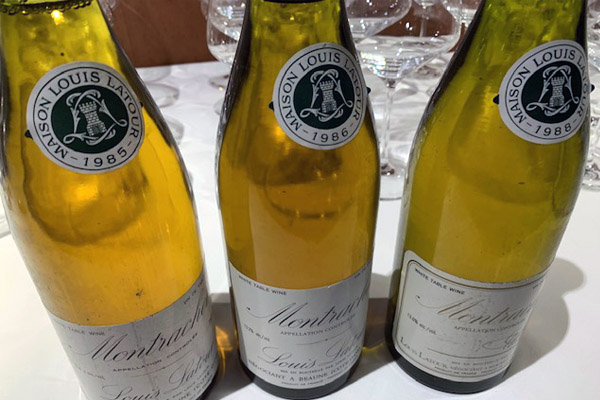 Over the years the wines of Montrachet have been considered the best and generally are the most expensive of all white Burgundy. It is certainly exclusive with 8 hectares producing only about 3,410 cases per year – or less in frost damaged ones like 2016. Roughly half is in Puligny & half in Chassagne where it is often called “Le Montrachet” – though Bouchard Pere has their vineyard signpost in Puligny marked “Le Montrachet”. There are 17 owners led by Marquis de Laguiche (2.06 hectares) marketed by Joseph Drouhin and Baron Thenard (1.83) marketed by Remoissenet. It is one of the 5 Grand Cru Montrachet-designated vineyards together with Chevalier, Batard, Bienvenue-Batard, and Criots-Batard. The reputation of Montrachet is for the intense rich full character of Batard combined with the elegance of Chevalier into something really special much more concentrated, complex, and age worthy. Certainly that outstanding quality has shown up in many spectacular bottles experienced by your scribe over the years including several Domaine de la Romanee-Conti (especially the legendary 1973 and youthful 2010) and a Balthazar (12 litre/16 bottle format) of Ramonet 1986 at a dinner of pan seared lobster with fresh white truffles in Miami on November 2, 1997. Those amazing terroir aromatics plus balanced power and finesse with a touch of spice were so memorable. However this century have often found Montrachet to be a little too heavy for my delicate palate. I have been collecting and enjoying to drink more of the reasonably priced “lighter” elegant mineral (what causes that?) focused wines of Chevalier, Meursault Perrieres, Corton-Charlemagne, and Grand Cru Chablis – especially Les Clos! Not sure climate change plus the current style trend for white wine appreciation is helping the Montrachet old benchmark. Sorry – just raising the question? A lot of these thoughts came back to me at a dinner-tasting last week featuring six interesting Montrachet wines:

1988 LOUIS LATOUR 13.4: Lighter fresher style of these 3 vintages. More towards Chevalier elegance. Improved in the glass and opened up nicely. Delicious.

1986 LOUIS LATOUR 13.2: Looks vibrant and deep. Perfect rich creamy intensity. Like the style with no botrytis here but sometimes appears in 1986. Very textbook.

1985 LOUIS LATOUR 13.6: All were decanted and then poured immediately. The hazy tartaric crystals thrown had been allowed to settle to the punt with the bottles standing up for a few days resulting in very clear bright pours. Note the admirable lower alcohols here compared with the now more commonly seen 14+ range. Unfortunately this riper year is a little too mature with sherry elements. Still very rich and so Montrachet for the ris de veau course. Fond memories of our long debates at the IWFS Wines Committee meetings that included both Clive Coates & John Avery on the long aging abilities of 1986 vs. 1985 white Burgundy. 1986 won here. Other times 1985 has been better. 1985 was an excellent red Burgundy vintage (while 1986 was not) but both years made fine whites.

Not too shabby a Vosne-Romanee red wine flight either of all 1995 including the mystery wine of Richebourg from Domaine Gros. Surprised that the RSV was quite a bit darker shades of red depth than RC but the latter has the much more sensational profile for sure but still needs more time to reach that top plateau.

Your thoughts please on the style of white Burgundy that you enjoy the most. 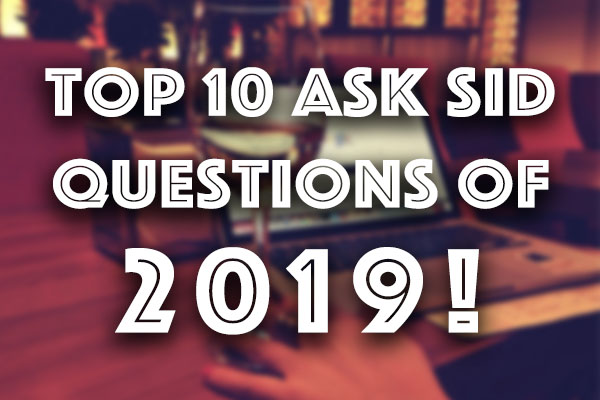 There were some fun food questions raised during 2019 but most were focused on wine which filled all Top 10 positions. Two were pure facts like #2 “SCOTUS decision regarding alcohol deregulation” & #6 “State producing the most wine” but the remaining eight were subjective opinions given by your scribe mainly about rating vintages including your #1 “Best and worst years this decade for Burgundy.” It has been both a delight and a challenge to consider your questions raised and pondering over the answers. Hope by following these postings you have picked up a few gems of wine & food knowledge along the way. Keep up your good work with the interesting questions!

3. Best wine made in Spain?
blank

4. Where to visit for best wine experience?
blank

7. What is the Best Winery of a Celebrity?
blank

8. Do you prefer Syrah or Shiraz?
blank

9. best one or two vintages in the last 6 decades for Red Burgundy?
blank