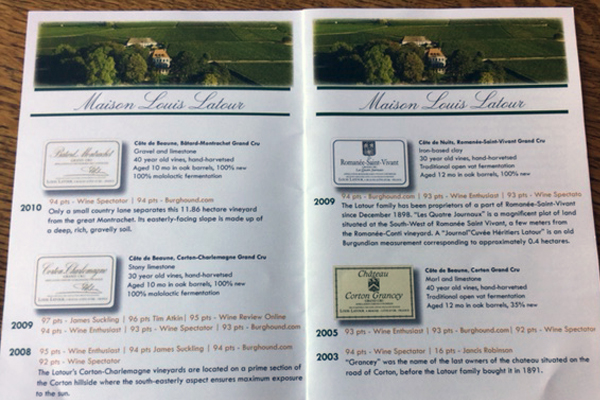 A third memorable event at the IWFS Baltimore Festival weekend earlier this month was a dinner of top Burgundy at the Four Seasons Hotel with Louis-Fabrice Latour of Maison Louis Latour. Excellent menu choices were made of serving halibut & monkfish matching so well for the whites and Cornish Game Hen & Veal Osso Bucco with the reds – all Grand Cru! Maison Louis Latour is an important family owned and run negociant-eleveur in Burgundy with 120 acres of vineyards (half Grand Cru the largest holding in Burgundy) dating back to 1797 representing 11 generations now overseen by the 7th Louis Latour. Fond memories of Louis-Fabrice’s father Louis Paul Latour who passed away on April 5, 2016. So many wonderful lunches at his home in the seventies and eighties always with a choice magnum or two of old Corton- Charlemagne still showing freshness and that amazing complexity. Remember vividly their 200 year anniversary celebrations in 1997 where the last magnums of that special vintage 1959 Corton Grancey red shone very brightly at 38 years! Louis Paul expanded into the Ardeche since 1979 with Domaine de Valmoissine in the Haut Var and since 1999 Louis-Fabrice has continued this expansion adding Simmonet-Febvre in Chablis & Henry Fessy in Beaujolais plus extensive renovations at Chateau Corton Grancey. Appreciate how they are following an organic path with a priority for letting the terroir express itself fully in the wines. November 15, 2017 issue of Wine Spectator is very bullish on their new releases with high marks for 2015 whites ranging from 95 points for Montrachet to 90 for Meursault Chateau de Blagny. The 2015 reds too are similarly lauded with 95 for Cortons to 90 for Santenay. Certainly the wines served here showed very well indeed with some brief comments:

2009 Corton-Charlemagne Magnum: Over 11 prime hectares with a choice south-easterly exposure resulted in a fatter grilled almonds easier more forwardly expression from this warmer vintage. Louis-Fabrice offered that Burgundy production was 60:40 red to white just 5 years ago but now has changed to 2/3 white to 1/3 red. He wants to see more red pinot noir made.

2008 Corton-Charlemagne: This was exquisite. Still so young but fresh well balanced vibrant acidity with pure elegance. Should be a long distance runner (hopefully no pre-mox) with bottle aging. Their old style usually seemed to have more new oak with riper fruit while this new mineral style is preferred by this scribe. Louis-Fabrice confirms that earlier picking of the grapes and less time (8-10 months) in new oak is delivering a fresher more mineral style. 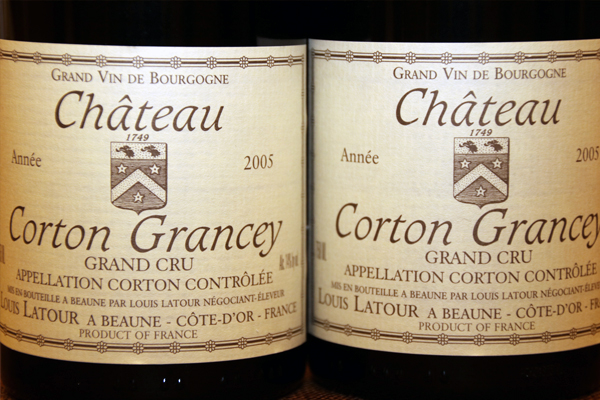 2003 Chateau Corton-Grancey Magnum: Big rich powerful more spicy Corton from a uniquely hot year. Yet has cooler fruit with only 13.5 alcohol and balance in this big format. Louis-Fabrice states their aim is to pick fruit that will show finesse and charm in the resulting wine. Property just 10 metres from the recent DRC acquisition in Corton.

2009 Romanee-Saint-Vivant Les Quatre Journeaux: Remember Louis Paul visiting Vancouver in March 1982 and serving the 1964 of this wine which he described as “elegance yet power and strength but with round finesse”. Owners since 1898 but now only .8 hectares of distinctive iron based clay. Outstanding site only a few metres from the famous Romanee-Conti vineyard. Very fruit driven year of 2009 shows an earlier accessible style with wonderful so called “feminine” finesse. 100% new oak blends with the classy terroir aromatics and that unbelievable velvety smooth texture already starting to emerge. Great wine here!

Recommend you check out Maison Louis Latour portfolio. Some lovely wines. Do you have a fav appellation? 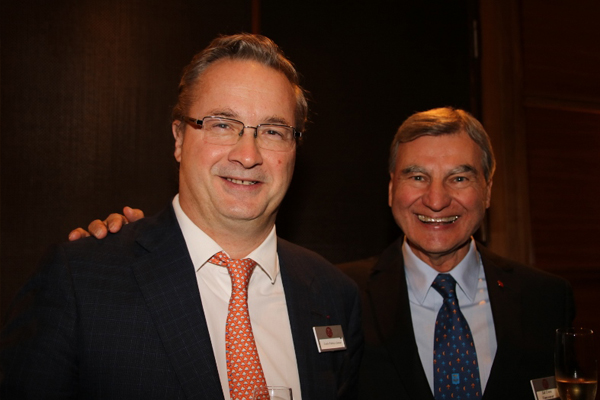