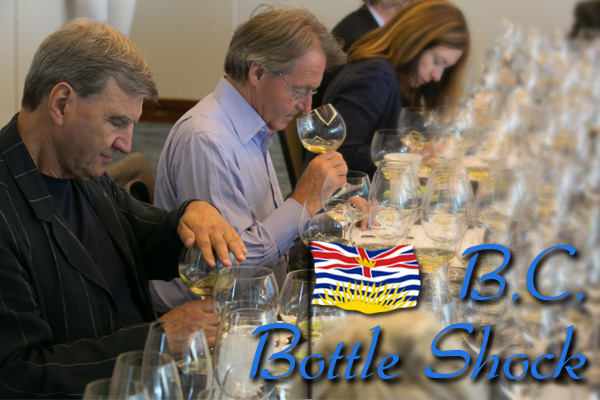 As regular readers of this Blog already know the British Columbia wines have improved by leaps and bounds in the last few years. Helped somewhat by global warming, winemaking experience and other vineyard factors there are current releases that are outstanding. The recognition of some unique key factors has contributed to this excellence and the distinct terroir that is evolving: good levels of natural acidity and tannins for the intense pure fruit flavours (including complex sage, tree fruits, herbs, earth) from long sunlight hours with dramatic swings between warm days and cool nights. Though far north at 49-50 degrees latitude many vineyards enjoy the benefits of this unusual hot dry desert short growing season which is so conducive to sustainable farming.

Therefore the timing was appropriate to test this theory on the visit this August for a week to the Okanagan Valley & Vancouver by world recognized wine expert Steven Spurrier consulting editor of Decanter and chair of their World Wine Awards with a “Judgment of BC” tasting. It also celebrated the 25th anniversary of BC VQA (Vintner’s Quality Alliance) a guarantee that the wine is made from 100% BC grown grapes. They now are promoting this with “BC VQA. Or You Could Call it BC DNA”. Back in 1976 Steven organized the historic “Judgment of Paris” comparing California wines against French. Seventeen acknowledged wine “pros” who know BC wines including your scribe accepted the invitation to rank blind 12 chardonnay and 12 syrah in separate flights each containing 6 from BC and 6 International benchmarks. Wine educator DJ Kearney (@djwines) the curator of this event together with Wines of British Columbia (www.winebc.com; @WineBCdotcom) did an outstanding orchestration of this tasting using the best wine glasses, serving at perfect wine temperatures, white table mats, natural light, adequate time to study the wine in the glass etc. Well done.

CHARDONNAY: A controversial choice because nearly every wine region is making international chardonnay but some regions are delivering a very special recognizable terroir. BC has some high quality examples but not enough distinct unique style to differentiate it from most other chardonnay around the world. Would prefer showing the success of Riesling (plantings from 1978), Chenin Blanc (plantings from 1968), Rhone blends (Viognier, Rousanne, Marsanne) or even the most planted variety Pinot Gris – which sometimes can be a little boring.  The results with no BC chardonnay in the top 5 was not a surprise to me.

SYRAH: A very good choice because certainly syrah is impressive from BC. Magically combines both characteristics of rich ripe intense fruit from warmer climate regions together with fresher, black pepper, gamey, floral, and the more balanced style of cooler regions. Not unexpected to me with the results ranking first, fourth & fifth and showing clearly that BC Syrah is world class among its peers. Cabernet Franc, Pinot Noir, Gamay Noir, or even the most planted variety Merlot would be good choices for hopefully the second edition of this event. Steven tried many pinot noir wines during his Okanagan Valley visit and was impressed with “the elegance and the true Burgundian style of this variety”.  Yes Foxtrot Vineyards 2012 and others are really singing. He also noted ” For me wine is the three “P’s”: the Place, the People, and the Product. British Columbia ticks all these boxes with exuberance, elegance and conviction”. BC Bottle Shock? Perhaps. For some yes. For me no. The results of both blind tastings are as follows:

Goodbye Summer! A Salute to Burgers and Wine 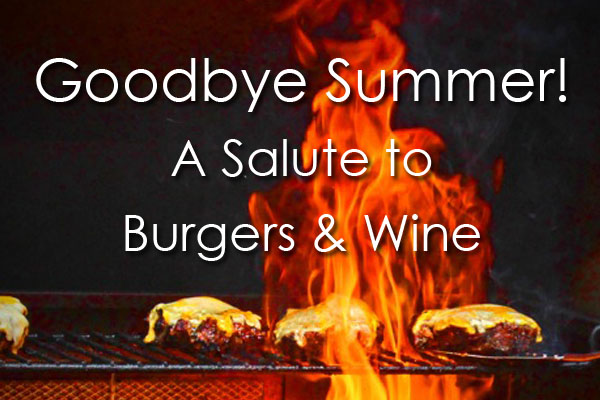 With the Labor Day weekend just around the corner, fellow foodies and BBQ aficionados alike will be flocking to get in their last big outdoor party off with a bang!  Beer might be the go-to beverage for the upcoming tailgating season, but why not celebrate the last days of summer with these wine and hamburger pairings?  Bon Appetit!

By SweetOnVeg [CC BY 2.0], via Wikimedia Commons

Question: I find the German sweetness levels confusing. Would you explain the simple meaning of the terms Spatlese, Auslese, Beerenauslese, and Trockenbeeranauslese on the label.

Answer: You are right there is an increasing sweetness level based on ripeness or must weight (Oechsle) but the terms really mean this:

Spätlese: Sweeter than Kabinett but made from late gathered grapes.

Auslese: Made from selected perfectly ripe bunches of grapes.

Beerenauslese: Made from selected grapes from the ripest bunches.

Trockenbeerenauslese: Made from single grapes which have been left on the vines until they have shrivelled to almost raisins. 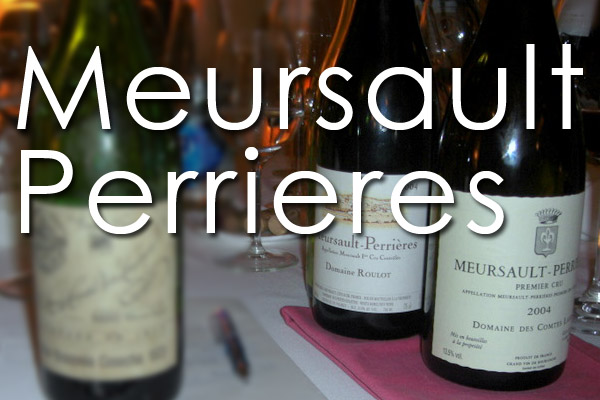 In this new era of high prices for white Burgundy with those continuing pre-mox issues the yellow flag of caution is clearly out. However I still continue to admire and collect Meursault Perrieres. This outstanding Premier Cru white has great potential still offering relative value compared to the more expensive Grand Crus. Sunday August 23 was the annual Paulee for the Vancouver chapter of Confrerie des Chevaliers du Tastevin. I referenced this event 2 years ago on this Blog August 27, 2013 when the theme was the 5 Grand Crus of “Montrachet”. Last year was Corton-Charlemagne but this year so exciting for me Meursault Perrieres. A rare opportunity to try 35 different bottles assessing the terroir of this vineyard I cherish over several vintages by various producers.

DOMAINE DES COMTES LAFON: An outstanding producer of complex Meursault from deep cold cellars! Often have found his older Perrieres to be more mature than say the same vintage of his Charmes or Genevrieres. Discussed this with Dominique Lafon this Spring and he mentioned that it could possibly be because the vineyard had been usually picked last but more recently he is picking earlier and at the same time as his other vineyards. Tried 1999 the stand out here with still crisp fresh complex minerality, a mature less clean 1998, and forwardly charming easy drinking 1997.

2005 VINTAGE: Tried quite a few producers of this concentrated vintage at their 10 year mark. GIRARDIN quite light but a lovely statement almost steely. LATOUR GIRAUD much fuller with a good dry stony finish showing classic terroir. DROUHIN sampled 3 bottles all slightly different but in that full softer style on best plateau. Also had Drouhin young impressive 2012, solid 2008 with better acidity, and 2007 with pre-mox issues.

2010 VINTAGE: Several bottles of JADOT which showed better balance of the vintage from a smaller crop and was a popular selection by many of the guests.

BOUCHARD PERE: They had the most representation in this Paulee. Referenced them in the April 26, 2015 Blog posting. Impressed with all they are doing with their whites to avoid pre-mox issues. I really like their earlier picking mandate to retain freshness with acidity. They don’t want late picked chardonnay grapes that are over ripe and heavy while losing their delicacy. There is around 12-13 hectares of the Perrieres “climat” and Bouchard owns 10% of it. Remember that they are the only big company “negociant” that actually owns vineyards there. They have 3 plots with the main one stony, a 2nd one on “white” soil providing acidity & minerality and a 3rd small plot close to Puligny-Montrachet border that provides excellent aromatics. Wonderful Perrieres particularly from the 2008 vintage onwards. Fortunate to try 6 vintages here. 2011 fresh light and lovely (as were JACQUES PRIEUR, CHATEAU DE PULIGNY MONTRACHET, and fatter OLIVIER LEFLAIVE); 2009 excellent balanced & impressive for the hot vintage but no rush to consume in bottle or magnum, the real surprise of this tasting ; 2008 more classic year with more acidity but still backward while showing the terroir very well; 2007 drier crisp but simpler; 2002 fully developed mature; 2001 corked.

Overall I was impressed with the wines. The younger wines generally were very fresh, lively, showing finesse and purity while still developing complexity. Only a couple of bottles showing any pre-mox issues. Still a big fan of Meursault with Charmes having that flowery aspect, Genevrieres perhaps more consistent every year with that nutty candied citrus peel, and especially Perrieres with that amazing minerality and ability to reach the highest peaks of white Burgundy complexity in the best years. Cellar some.

A look back at Jack Dempsey’s Broadway Restaurant 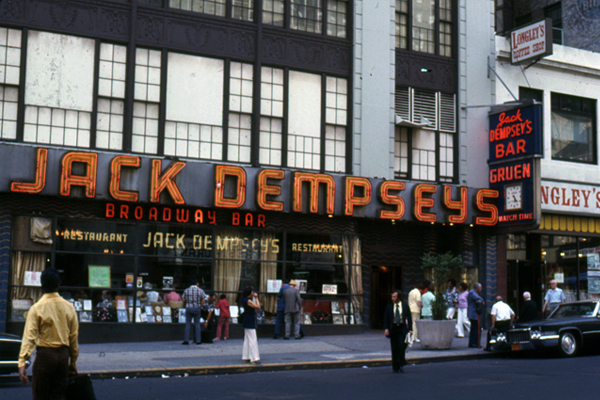 Outside of Jack Dempsey’s Restaurant, circa early 1970s
By Malco23 (Own work) [CC BY-SA 3.0], via Wikimedia Commons

The year was 1935.  While America struggled through the Great Depression, “Cinderella Man” James J. Braddock proved that there was still some hope for the little guy when he beat Max Baer for the heavyweight championship of the world in one of the greatest upsets in the history of pugilism.  And across the street from Madison Square Garden—the undisputed Mecca of boxing—William Harrison “Jack” Dempsey, arguably the best prizefighter of all time, traded in his gloves for the role of restaurateur at the corner of Fiftieth Street and Eighth Avenue.

Featuring live bands, dancing and no minimum charge, Jack Dempsey’s Restaurant, which eventually moved to 1619 Broadway quickly became a landmark watering hole for both native New Yorkers and fight fans eager to see the world-famous “Manassa Mauler” in person.  Boxing historian Bert Sugar recalls, “I was walking up Broadway and I saw Dempsey in the window.  Dempsey himself!  I couldn’t believe it. I thought it was a cut-out.”

Greeting patrons with a genial “Hiya, pal,” Dempsey could usually be spotted in the corner booth where he eagerly signed autographs and posed for photographs (long before sports memorabilia became such a lucrative business).  Of course, for any boxing fan, it must’ve been a dream come true to sit down over a Tom Collins while Dempsey told you the story of his epic battle against Georges Carpentier, marking the sport’s first million-dollar gate.  Or how about eating Maine lobster while Dempsey described his version of the infamous “Long Count” during the rematch with Gene Tunney in 1927.  Few places in the Big Apple could match the atmosphere like the one at this restaurant.

“Bubbling over with Music, Gaiety and Good Food,” wrote Charles Sievert for the World Telegram.  “Jack Dempsey’s Broadway Restaurant attracts record ‘gates’ for the same reason the Manassa Mauler did in his Champ Days—plenty of action and color to be found,” according to Earl Wilson of the New York Post.

For over thirty years, after entering and seeing a giant painting of Dempsey’s championship fight with Jess Willard hanging on the wall, patrons could enjoy appetizers of stuffed celery, shrimp cocktail, and chicken gumbo, entrees of soft shell crab on toast, pot roast, and schnitzel a la Holstein, finished with a dessert of Fruit Jell-O or Pie with cheese.  The menu was relatively short by today’s standards, but was certainly an example of the times – a mixture of American and French cuisine.

Being such an iconic spot, Jack Dempsey’s even served as a backdrop for one memorable scene in Francis Ford Coppola’s 1972 masterpiece The Godfather.  As Michael Corleone waits to be picked up by Sollozzo and McClusky outside the restaurant, the signage illuminates what is about to happen next—a life and death struggle.

Unfortunately, just as Manhattan entered a period of sharp decline as soaring crime rates and urban decay plagued the city, Jack Dempsey’s suffered along with it, having to close its doors for the last time in 1974.  But looking back at the restaurant’s nearly forty-year history, Dempsey was certainly a trailblazer in successfully transitioning himself from the boxing ring to the dining room.  Long before other celebrities decided to invest in the restaurant industry, Dempsey proved it could be done through a powerful one-two combo of an irresistible atmosphere and a larger-than-life host eager to please his legions of adoring fans.  The food came second.