Ask Sid: Best way to get insurance for my wine cellar?

Question: Best way to get insurance for my wine cellar.  My carrier says they do not insure wine cellars.

Answer: I would check first again with your carrier as to how much (if any) is covered by the personal property coverage of your home insurance policy. Probably bad wine or breakage would be excluded from your home policy in any event. Depending on the value of your wine cellar and for broader protection you may want to get a specific wine coverage endorsement. Chubb Insurance has an “all risk” Masterpiece Valuable Articles coverage providing broad protection on either a blanket or itemized basis for wine cellars. Also check out for further information Iron Gate Cellarage website (www.irongatewine.com) who have a Partners link that include Chubb Insurance and others. 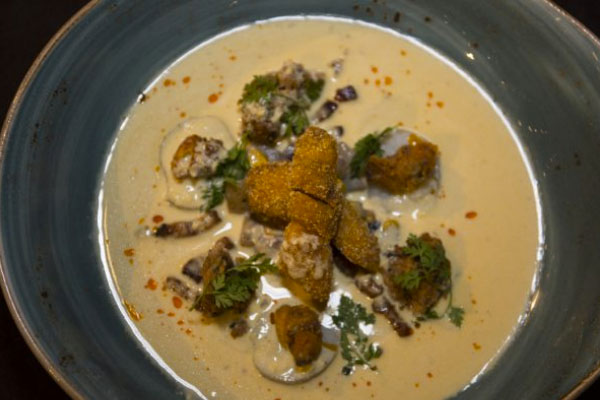 The movement to support sustainable seafood continues strongly. Competitive chef events have just been held in Halifax, Toronto, Calgary and Vancouver for #ChowderChowdown. Proceeds from these fundraisers featuring original chowders matched with craft beers directly support Ocean Wise (www.oceanwise.ca), a Vancouver Aquarium conservation program created to educate and empower consumers about the issues surrounding sustainable seafood. Seafood has to meet four criteria: 1.Well-Managed operations based on the latest research; 2. Abundant & Resilient Species from healthy populations that are resilient to fishing pressures; 3. Limited Habitat Damage – caught or harvested in ways that do not negatively impact natural habitats and ecosystems; 4. Limited By-Catch avoiding the over 30% presently accidentally caught and discarded. Globally we are eating more seafood with average seafood consumption per person annually in 1960 at 9.9 kg and increasing in 2014 to 20 kg. However, be aware that overfishing is a great threat to our oceans and rivers.

The popular Vancouver event on November 16 featured 14 finalists each paired with a different craft beer. Your scribe as a judge enjoyed the clever use by the chefs of the ingredients in the chowders. Impressed by expensive sliced fresh geoduck slices with lemon balm, paprika, nutmeg and ginger by Chef Chris Andraza of Fanny Bay Oyster Bar matched to a winter vanilla spiced ale by Big Rock Brewery. Great diversity (not just clams!) among the 14 including a classic Black Gold Mussel Chowder by new Vancouver Aquarium Chef Ned Bell (ex Four Seasons); Giant Octopus; Ham Hock, Pea meal Bacon & Side Striped Prawn with a Honey Smoked Beer at 10.9 alcohol; Salmon & Tamarind; Gluten Free Poutine; Sablefish & Humpback Shrimp; Spicy Chorizo, Corn & Smoked Halibut Bisque; and Sturgeon Coconut Shower. The worthy winner was voted by us to be Chef Aaron Rail of the White Whale in Courtenay BC with big taste from lots of Dungeness Crab to go with clams, bacon, shrimp, smoked salmon and peppers paired with an English Style Bitter Ale.

Do you have a killer chowder recipe you would share with us?

By stevendepolo [CC BY 2.0], via Wikimedia Commons

Question: For our US Thanksgiving tomorrow I have decided to change from the traditional turkey with all the trimmings and just serve Coq au Vin. What about the best wine to serve with it?

Answer: Interesting. André Simon always liked Clos de Tart red Burgundy from Morey St. Denis with Coq au Vin. An excellent choice indeed and a real favourite property of mine but a rather expensive one to serve these days. A good value red Burgundy should do the trick nearly as well – particularly from the delicious forwardly drinking rich 2009 vintage. Other fuller pinot noirs from anywhere around the world could also match well. Consider also any one of the 10 cru Beaujolais which are so popular these days and they will pair nicely if served slightly cool. Maybe for fun try using the identical wine both in your chicken dish and for drinking with it – if not too expensive an option. Enjoy the special day!

Confraria do Vinho do Porto 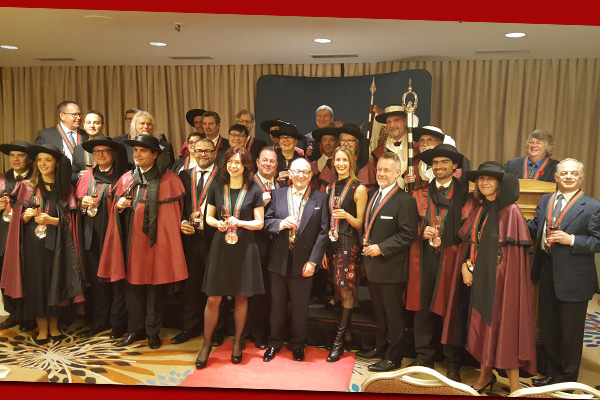 Last month at a ceremony followed by dinner in Vancouver your scribe was admitted as an Honorary Confrade with the rank of Cavaleiro (Knight) in the Confraria do Vinho do Porto (Port Wine Brotherhood & Sisterhood) established in 1982 with the purpose of communicating, promoting, and reinforcing the worldwide reputation of Port Wine. This title is given to those who have been recognized for having made a commitment and by their actions, reputations, or position made a significant contribution to the image and knowledge of Port Wine. The garnet-coloured cape, trimmed with a black ribbon, and wide-brimmed black felt hat, with a long black silk sash draped around the crown and falling over the left shoulder worn by the members added a dashing impressive look to the proceedings. Our induction ceremony was led by Chancellor George Sandeman following on from earlier ones this year in Shanghai & Macau, with Toronto & Montreal in 2015, and New York, Washington DC & Boston in 2014. Every year in Oporto on St John’s Day (June 24) is a joyous Entronizacao (Induction Ceremony) coinciding with the race of the Barca Rabelo (flat-bottomed boats used for bringing the Port Wine from the Douro to Oporto). With a glass of Port Wine in hand we proclaimed “Comprometo-me a dar o meu apoio a Confraria e continuar a lutar pela dignificacao do Vinho do Porto” (“I swear to give my support to the Confraria and to continue fighting for the honour of Port Wine”). Saude (Saw-OO-de)!

“There is a Palace”: Revisiting the Mateus Rosé phenomenon 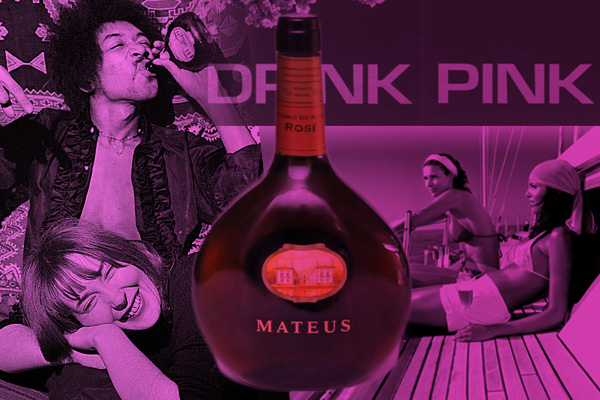 Flipping through the pages of the October 10th, 1969 edition of Life magazine, one black and white advertisement in particular seems to stand out. No, it isn’t the one for Chevy’s new pickup truck or the one explaining the many advantages of nuclear power; this ad features an odd canteen-shaped wine bottle from the land of Salazar. “There is a palace. Its name is Mateus,” says the text. “A wine aptly named after the palace by the valley. Mateus. It is a rosé wine.”

And so began one of the most popular trends of the 1970s.

Consumed by a countless number of Americans (including many celebrities and rock stars), Mateus Rosé, along with fondue parties and pasta primavera ended up becoming synonymous with this tumultuous decade. While today it may be distinctly unfashionable to be seen drinking it, one cannot stress just how popular this product once was, not only with wine drinkers but with a huge crossover market that included both beer and soda drinkers. Separating themselves from the herd, its unique bottle design was based on a Portuguese water flask used by soldiers during the Great War—a design that was instrumental in a successful marketing campaign launched by owner Fernanco Van Zeller Guedes. Wine writers Michael Bywater and Kathleen Burk state, “Mateus Rosé achieved an almost unheard-of brand recognition … the bottle … was simultaneously unlike any other mass market wine bottle.”

Ironically, while we tend to associate Mateus Rosé with the Me Decade, it actually got its start way back in 1942, during the height of the Second World War. With German U-Boats preventing neutral Portugal from selling wine to its traditional European clientele, vintners were forced to look elsewhere. Targeting the former Portuguese colony of Brazil, the Sociedade Comercial dos Grandes Vinhos de Mesa de Portugal founded by Guedes focused on harvesting Vinho Verde grapes that were popular in that country. Using varietals such as Baga, Tinta Barroca and Rufete, Mateus looked to French winemakers to help them make a fizzy pink wine that would hopefully be the toast of Rio de Janeiro. Little did they know that less than thirty years later, people from around the world would be lining up to drink their wine.

Realizing the enormous power of image, advertisements, which showed an opulent baroque estate called Palacio de Mateus on the label, repeated the claim that “since it comes from the valley of the Palace of Mateus, it may honestly be called fantastic.” In reality, the wine was never made there; its headquarters was in a rundown co-operative north of the Douro River. And the famous building printed on hundreds of millions of labels wasn’t even a palace. According to Portuguese law, for it to be given that distinction, royalty would have had to spend a night there. Then again, considering that it’s one of Portugal’s most famous buildings thanks to this wine, maybe it should be designated a palace.

So how did the Mateus estate end up on a bottle of rose? In Oz Clarke’s The History of Wine in 100 Bottles, Guedes offered the owners a 50 cent royalty on every bottle sold or a lump sum paid up front in exchange for the use of its likeness. Taking the single down payment instead, it is a decision that will go down as one of the greatest blunders in the history of both wine and business. Billions of dollars later, “It’s still not a subject to be brought up in conversation,” if you ever visit, writes Clarke.