Bengals, Browns, Buckeyes & Bubbly: A look back at the history of sparkling wine in Ohio 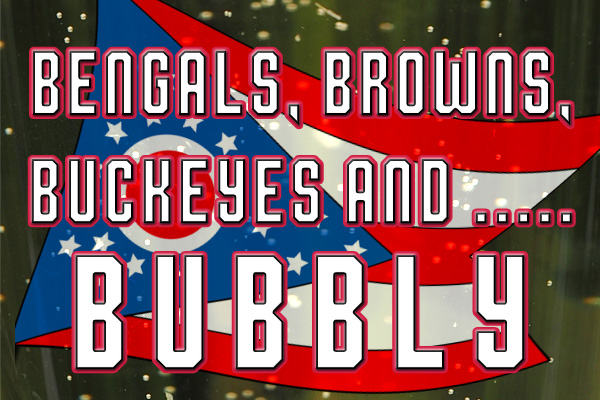 Mention America’s sparkling wine industry and many will inevitably point to the state of California.  According to a recent FoxNews.com article, eight of the ten best bottles of bubbly were produced in the Golden State from Mumm Napa to Schramsberg Vineyards.  So, it will probably come as a bit of a shock to some that the country’s first successfully sold sparkling wine was produced in Ohio.

Ohio, a state often associated with tire factories, the Rock n’ Roll Hall of Fame and passionate football fans was once the country’s largest wine growing region.  Producing over 570,000 gallons per year by 1859—more than double that of California—the Buckeye State was responsible for over a third of the national total.  And it all got started in Cincinnati when sparkling wine was discovered by sheer accident.

The story began when Nicholas Longworth, a wealthy and eccentric businessman from New Jersey arrived on the northern banks of the Ohio River.  Hoping to be the first to successfully grow Vitis vinifera grapes in the New World, his efforts—just like those before him—ended in disappointment as European rootstocks failed to flourish in the United States during the 1800s.  However, one hybrid varietal that “Old Nick” seized upon was Catawba, a lilac colored grape high in acidity that generated musky flavors often associated with labrusca varieties.   According to historian Thomas Pinney, “In Longworth’s hands, and for a time in the hands of others who tended the vineyards in and around Cincinnati, the Catawba seemed to fulfill at last the long-held hope that America might have a wine of its own.” 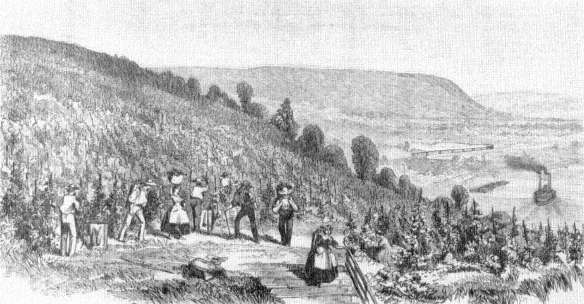 Drawing of Longworth’s vineyard next to the Ohio River.

Beginning his first commercial vineyard in the early 1820s with a local German-American customer base, it took nearly twenty years before Longworth struck gold after accidentally fermenting some of his Catawba for a second time.  The result was a bubbly version that dwarfed his previous bottles in terms of quality. Thus, he decided to enlist the help of French Champagne makers to duplicate this accomplishment.  As Longworth explicitly told his assistants, he was never out to duplicate the sparkling wines of Europe, but instead, to create the “pure article, having the peculiar flavor of our native grape.”  Although an astonishing eighty-four percent of all bottles burst in early production,  “Sparkling Catawba” became a huge hit, putting Ohio on the winemaking map.

“Far superior to any sparkling wine which Europe can boast, whether they came from the Rhine or Moselle, or from the champagne districts of France,” wrote the Illustrated London News.  With this sparkling success being sold across the world, American poet Henry Wadsworth Longfellow memorialized both Cincinnati (nicknamed the “Queen City”) and its grapes in his famous poem Catawba Wine:

While pure as a spring
Is the wine I sing,
And to praise it, one needs but name it;
For Catawba wine
Has need of no sign,
No tavern-bush to proclaim it.

And this Song of the Vine,
This greeting of mine,
The winds and the birds shall deliver
To the Queen of the West,
In her garlands dressed,
On the banks of the Beautiful River.

More than a century and a half later, while not the powerhouse it once was, Ohio still remains one of the country’s top ten wine producing states with five designated American Viticultural Areas (AVAs).  So if you’re looking to party like it’s 1859, open up a bottle of Ohio sparkling Catawba and experience a true taste of American wine history! 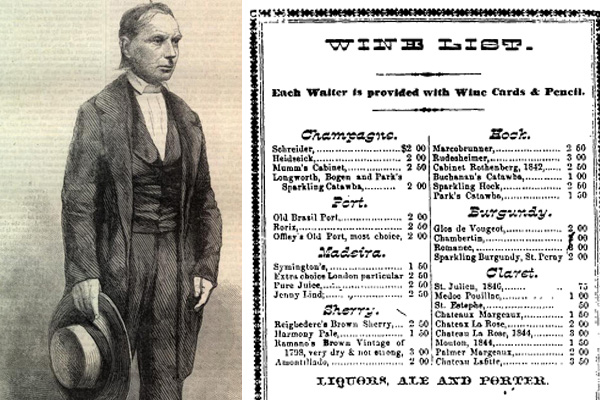 Question: I am a younger member of an American IWFS Branch. Attend their events which I enjoy but I still like to carefully watch my nutrition. Any tips on some superfoods I should be including in my meals on a regular basis?

Answer: Yes I feel the same way you do and try to include many so called “superfoods” with extraordinary health benefits in my regular regime. Here is my personal Top Twenty List: 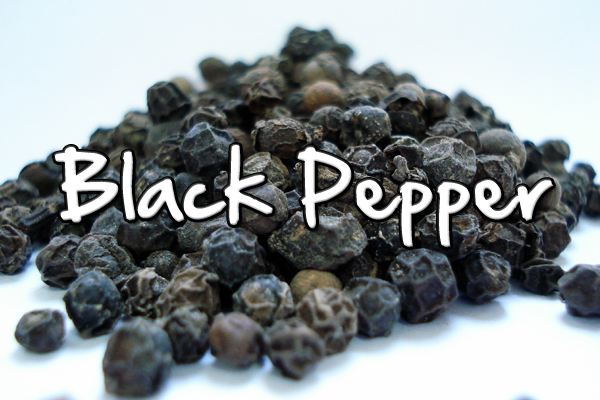 I like black peppercorns which seem to be rather under appreciated these days. It was Portuguese explorer Vasco da Gama who discovered the Malabar Spice Coast of India back in 1498 – the birthplace of pepper. More valuable in the old days than presently black pepper was used by the rich to spice up their foods and as a possible cure for the Black Plague. Today it still is considered an energy of nature that helps cool the body temperature down as it causes perspiration and has medicinal anti-viral properties. In the Middle Ages it was as valuable as cash so that workers were not allowed to wear trousers with pockets or cuffs while on the job – just like diamonds! India was the leading producer for long time but diseases lowered crop yields substantially and newcomers like Vietnam (now the major exporter since 1999), Indonesia, Brazil. Malaysia and others are now competing.

The harvest begins with the picking of the green berries and then leaving them in the sun for several days where the pepper around the seed shrinks and darkens. Though black pepper is still cheap at the farmer source markups along the way drive the price higher on the retail market. However it is bargain. If it was called truffle they could charge a lot more. I always bring some choice black peppercorns back to Vancouver on every European trip. My favourite is Poivre Sauvage de Voatsiperifery – not cultivated but a wild jungle small black pepper with the stem attached from Madagascar. Just bought a package this month of 125 grams for only 7.60 euros. Also enjoy Poivre noir de Kampot – full grained black peppercorns from Cambodia. You haven’t really tried black pepper till you have used some of these. So fresh intense and fiery but subtle and with the best aromatics outside your most expensive  bottle of mature Syrah. Some chefs prefer using invisible white pepper on their omelets but for pure ecstasy freshly ground top flight black pepper flecks is the way to go. A little goes a long way. Helps out so many food dishes.

Check out this link for some of these. The website indicates that it is currently unavailable. Also that it is rare with only 15ookg/year harvested with a shelf life of 3 years. They also have organic Kampot, Tasmanian Mountain wild pepper and other black peppers worth exploring. Have fun experimenting.

Dining during disaster: food, wine and crisis in JFK’s Camelot 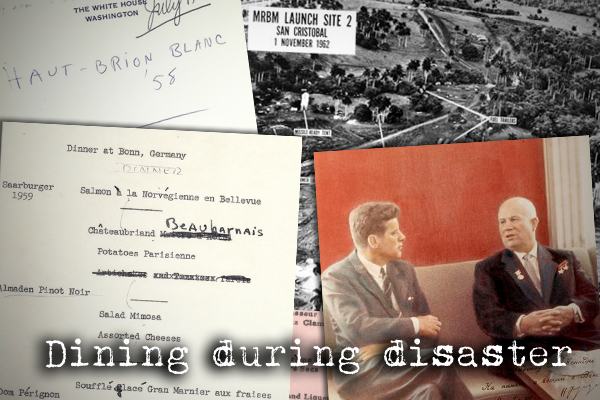 Throughout the Cold War, many of us envisioned the commander-in-chief locked away in an underground bunker, surrounded by maps, radar screens and incoming cables as a major international crisis reached the brink of disaster.  However, during the Kennedy administration, while crucial events transpired across the globe, the president wasn’t always at an undisclosed location arguing with his belligerent generals.  Instead, there were times when he could be found drinking some of the best wines from Bordeaux and Burgundy at 1600 Pennsylvania Avenue.  Even with the option of nuclear war always on the table, the formalities and social responsibilities of being the chief executive—no matter how trivial—rarely stopped.

Special thanks to the JFK Library for providing all the photos and supporting documents for this entry!

On the afternoon of April 17th, 1961, President Kennedy is all smiles as he dines with the Prime Minister of Greece at a White House luncheon.  But as he raises his glass of 1952 Dom Pérignon (JFK’s favorite brand of Champagne), an amphibious invasion at the Bay of Pigs unfolds. Enjoying creamy Chicken LaFayette paired with Château Corton Grancey pinot noir, the president’s Greek guests are unaware that 1400 CIA-trained soldiers are struggling to gain a foothold on the beaches of Cuba while they eat.  Lacking sufficient air cover, the entire operation goes down in history as an unmitigated disaster—long before the Dame Blanche ice cream and pastry dessert even arrives at JFK’s table.

Following Kennedy’s disastrous meeting with Nikita Khruschev in Vienna, the Cold War suddenly turns red hot when a wall is constructed in order to stop East Germans from fleeing into West Berlin.  With many predicting the start of World War III, Kennedy speaks to the nation on the night of July 25th, 1961, promising an increase in military spending to meet this growing threat.  But hours before the historic address, a stag luncheon is held in the East Room of the White House for the Prime Minister of Nigeria.  Featuring roast sirloin Monegasque, potatoes Parisienne and stuffed tomatoes, a decision is made just days earlier to switch champagnes to compliment the Pêches Melba dessert.  So while the cement dries on the Berlin Wall, Perrier-Jouët English Cuvee Brut 1952 is replaced with Moet et Chandon Imperial Brut 1955.

The State Dinner honoring Pakistani President Muhammad Ayub Khan, a vital Cold War ally, is unique in that instead of being held at the White House, this event takes place at George Washington’s historic estate on Mount Vernon.  While the president may be concerned about a Soviet nuclear attack, event planners have their own enemy to defeat – a merciless army of hundreds of mosquitos.  Wreaking havoc with Chef René Verdon’s dishes, the Signal Corps rushes across the Potomac River to curb this growing threat.  According to social secretary Letitia Baldrige, everything from the canopied tents to the avocado and crabmeat mimosa is doused with bug spray.  Thankfully, no one becomes ill from the decadent mushroom and tomato Poulet Chasseur and Château Haut-Brion Blanc 1958 blanketed with DDT.

Above: Letitia Baldrige recalls the infamous night at Mount Vernon.

As the Cuban Missile Crisis begins, Kennedy and his advisers consider a number of options from a naval quarantine to a full-scale invasion of the island.  But on October 16th, 1962, the first of this thirteen-day calamity, the president carries on with his social calendar, giving the impression that everything is business as usual.  One of these scheduled events is luncheon with Crown Prince Hasan of Libya, who, like most Americans, is completely unaware of the volatile situation in the Caribbean.  Served filet of beef and French fried potatoes, ending with pistachio and orange ice cream for dessert, Kennedy is calm, cool and collected throughout the entire lunch with the Libyan Prince. However, what is missing from the final menu are the wine selections, which could be the result of either the Prince’s Muslim faith or the sobriety of the entire ordeal occurring behind the scenes.

(Left) Document from the Libyan embassy accepting the president’s invitation. (Middle) The tentative menu with the wine selections crossed out. (Right) The finalized menu. (Click to enlarge all)
blank
blank

Question: I am a long time beer drinker who is now experimenting with wine. Find that I prefer the more refreshing white wines with lower alcohol levels of 10 or under which usually means riesling. Sid do you have another choice you would recommend for a change of pace?

Answer: Yes some of those exciting craft beers are strong brews with high alcohol levels topped by Samuel Adams Utopias around 28 recommended to be served in only 2 oz. servings – not that refreshing! Riesling is an excellent white wine choice. It comes in many styles and sweetness levels. Not sure whether you are drinking bone dry riesling or ones with a some residual sugar. Vinho Verde from Portugal for the summer is dry, light and easy often with a touch of effervescence. A good alternative to riesling is the focus by the New Zealand wine industry on producing “lifestyle” sauvignon blanc with lower alcohols. There are now quite a few in the market including Villa Maria and others but a favourite of mine is John Forrest who is championing this winemaking style. He also has the brilliant The Doctor’s Marlborough Riesling 2014 you might look for plus some other refreshing varietals. Check out their website at www.forrest.co.nz