A wine with a Cristal clear past 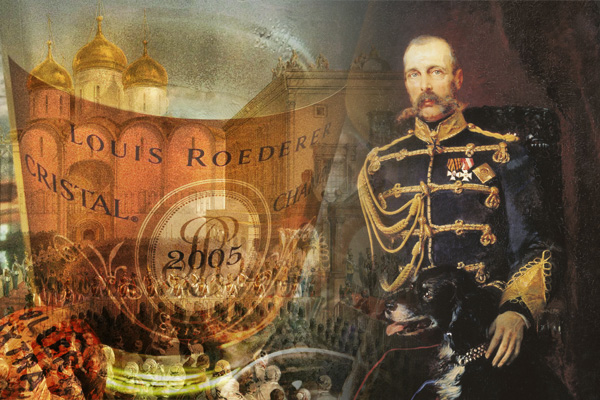 Just mention the word Cristal and most of us think of Hollywood celebrities and hip-hop moguls spending frivolously on expensive bottle service while partying late into the night. Beginning in the 1990s, this brand of Champagne has been referenced in so many rap songs that it is now synonymous with a culture defined mostly by escapism and braggadocio. And although there has been a falling out between its makers and the hip-hop community over recent years, it’s easy to see how this particular bottle of bubbly, distinctly wrapped in cellophane, came to symbolize the desire for luxury and wealth. After all, its original purpose was appealing to the vanity of a Russian tsar.

Searching for the origins of Cristal, one has to travel back in time to when Russia was one of the most highly sought-after markets for the great Champagne houses. As a result of the Napoleonic Wars where Russian soldiers briefly occupied the region, stories about the quality of its bubbles were sent back to the royal family, and very quickly, fizz became one of France’s most favored exports. Describing the breakthrough success of Veuve Clicquot during this time period, author Tilar J. Mazzeo writes, “Those same aristocratic officers who had come to love her wine during the occupation of Reims were now prepared to buy her champagne at any price. Soon, Czar Alexander declared that he would drink nothing else. Everywhere one heard the name of the Widow Clicquot and praises for her divine champagne.”

Enter the house of Louis Roderer and its most famous customer, Tsar Alexander II, a well known oenophile, and what you have are the makings of perhaps the most unique bottle of champagne in history. While Cristal today is known for its dry and clear taste, back in 1876, when the son of Louis Roderer created a prestige cuvée specifically for Russian royalty, it needed to appeal to the tsar’s well-known sweet tooth. Adding 20 percent of sweet liqueur and a collop of yellow Chartreuse to the pinot noir and chardonnay, Roderer succeeded in developing a wine that became the toast of the royal court. However, the drink was only one element—the other became its distinct packaging.

Not wanting to be seen drinking the same bubbly as the rest of the riff-raff, the tsar demanded an exclusive product that would stand out and one that only he could drink. The result became its iconic see-through design, which separated itself from the green bottles that everyone else drank from. The only difference from today is that back then, Cristal bottles were actually made from lead crystal.

Next came the flat bottom, designed specifically without a a punt. Having survived several assassination attempts, the tsar rightfully feared that his potential killer might sneak a bomb underneath a wine bottle, causing Roderer to make an adjustment that is still with us today. Of course, in the end, this design did not prevent the tsar’s murder in 1881. Even more devastating for Roderer was the Russian Revolution, which disposed his son Nicholas II from power. With this pivotal event, Cristal lost approximately 75% of its market overnight.

It would not be until 1945 that the general public finally got to taste this champagne, which is now wrapped in orange cellophane to protect against sunlight. But ever since its grand debut in 1876, Cristal has gone on to be one the most famous and recognized brands in the world, consumed by tsars, kings and celebrities alike.

Question: I have been drinking more of the inexpensive sparkling Prosecco but finding most of them a bit too sweet for me. Your thoughts Sid?

Answer: Good point. Prosecco from Northern Italy is a sparkling white wine made mostly from the Glera grape but often has up to 15% of other grape varieties in a blend. Popular ones often do have a fair amount of residual sugar. They do have drier selections labelled as Brut (with 0-12 grams/litre sugar), but also Extra Dry (12-17) tried recently with a scallop dish plus pineapple & bacon, and called Dry (17-32) which is really sweet  often served with dessert. The hot breaking news is that for 2017 we will see the first release of some Extra Brut for those who prefer a much drier style of Prosecco. Watch out for it and try it!

Your scribe enthusiastically endorses this newly published book Icon by respected wine historian John Schreiner. This topical 320 page tome perfectly captures the growing global respect for the special wines coming out of British Columbia. The growth of wineries has been really phenomenal now numbering more than 340 growing some 75 different grape varieties. This impressive work spotlights 98 of these top wineries plus some others “to put on your radar” who produce an “icon” (or flagship) wine being “the very best wine a producer can make”. He has suitably chosen his “wines with a track record of rising quality”, “not all… premium-priced”, and his “objective with this book is to encourage readers to collect verticals of favourite wines”.  As expected most of the wines selected are red with some of the top white wine producers including small-lot Terravista Vineyards noted by their absence. Hopefully subsequent editions will be expanded to include them and some of the other newer star wineries. Some wineries get detailed vintage reviews like 13 vintages (their first one 2001-2013) Osoyoos Larose Le Grand Vin and Mission Hill Family Estate Oculus 17 vintages (1997-2013). This book is dedicated “to Winemaker John Simes, who created Oculus in the 1997 vintage at Mission Hill Family Estates, continually refining it until it became the Okanagan’s premier icon wine.” Others like the exciting quality Checkmate Artisanal Winery has only their debut 2013 vintage. Classic quality pioneer Blue Mountain Vineyard and Cellars has a spotlight on all their “Reserves” including pinot noir, chardonnay and sparkling.

As a long time wine collector of wines from around the world and as one who is so appreciative of aged wines it is interesting to note these knowledgeable comments on the cellaring of BC wines: “A $20 wine can be expected to peak in seven years (in a good cellar). Most icon wines are constructed to age at least 10 years, improving and becoming more complex as they age. Indeed, the wines will likely cellar longer than that. As vines in this province have grown older and winemaking has become more skilled, the best wines are living 15 or more years.”  This is indeed encouraging news!

The organized notes by trained journalist John Schreiner (who started out as a reporter for the Regina Leader Post followed by a very successful long career as Western Canadian Editor for the Financial Post) are always so well researched and eruditely expressed. This adds enormously to the readability and easy reference of his latest admirable work all set out alphabetically by winery name.  Members of the IWFS will please note John’s valuable continuing contribution as a distinguished wine consultant on BC wines for our annual Vintage Card and author of the respected Monograph “Icewine”. Wonderful photography by Christopher K. Stenberg is a welcome addition bringing the region alive with a focus on picturesque vineyards and excellent grapes.  The publisher is TouchwoodEditions.com and the price is $39.95 US/Canada. You need this volume to be informed on this exciting unique wine region that has emerged and you will also enjoy reading it!

10 interesting facts about the wines from British Columbia 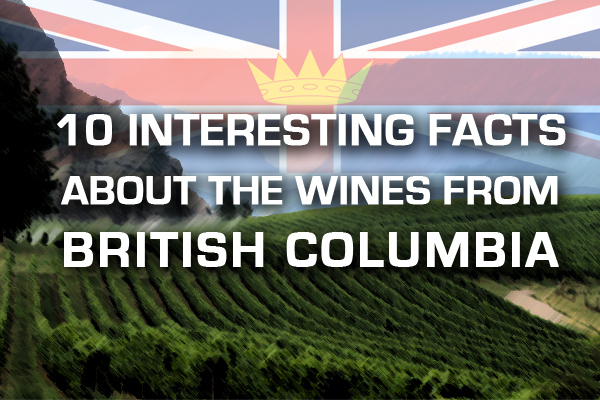 Drawing many parallels with the province of Ontario, the vineyards of Beautiful British Columbia truly began their ascent in the early 1990s when free trade laws forced local vintners to compete with wines south of the border.  However, by utilizing the full potential of areas like the Okanagan Valley, B.C. has increased the number of wineries by an astounding 2000% since 1990, representing approximately 9,800 acres that make everything from traditional Merlot and Cabernet Sauvignon to sparkling and icewine. So have a look below and see how such a phenomenal amount of growth has transpired in such a short period of time across the Pacific Province.

1. The first vines were planted by the Roman Catholic Church near Kelowna during the mid-1800s.

2. During the early 1930s, the province’s apple industry experienced a bumper crop that caused prices to plummet. Desperate for another source of revenue, the wine industry was able to convince farmers to switch from harvesting apples to grapes.

3. Up until the 1980s, British Columbia was mostly known for growing hybrid varieties such as Marechal Foch, Rougeon, & Baco Noir.

4. With the signing of the Canada-U.S. Free Trade Agreement, local vintners now had to compete with California, Oregon, and Washington. In response and to help increase quality, the federal government paid vineyards to pull out their inferior hybrid varieties and replace them with vinifera grapes, known as the 1988-89 pullout.

6. The vast majority of British Columbia is too mountainous and/or too far north for growing vinifera grapes. Only a tiny strip in the southern end of the province can support winemaking.

7. The most important and prestigious winemaking area in BC is the Okanagan Valley, which surrounds the Okanagan Lake and is nearly 500km east of the Pacific Ocean. It is one of the province’s few warm-climate wine growing areas.

8. Another prominent wine region is Similkameen Valley, which along with the Okanagan Valley represents nearly 90% of all the vineyards in the province. Roughly 400km east of Vancouver, these two areas are protected from coastal rains by two moderate mountain ranges.

9. Other areas include Fraser Valley, Vancouver Island and the Gulf Islands.

10. Today, there are more than 75 grape varieties that are grown by more than 340 wineries. Some of the most popular varietals include Merlot, Cabernet Sauvignon, Pinot Gris, and Chardonnay.

Ask Sid: Why do winemakers use both American & French oak on the same wine?

Question:  I see quite a few wines that have been stored in both American & French oak. Why is this?

Answer: Yes there seems to be a lot of them in the expanding number of New World wines – especially for bold reds and Bordeaux style wines. American barrels usually give more sweet assertive intense vanilla notes while French oak tends to deliver more subtle flavours with a better finishing lift. New barrels impart even more pronounced flavours than previously used ones. Larger size barrels than the traditional smaller barrique size help preserve the fruit so now are becoming more popular. Less use of oak is also an increasing trend. One reason for using a combination of oaks is that French barrels are generally much more expensive than American (or Slavonian and others). Another is what barrels does the winery actually have available to use in the cellar. Some winemakers do believe that using a combination does provide more complexity in the final wine. I must say I generally prefer French oak more though new American oak casks are much improved these days. Of course the key is always what does the wine smell and taste like after the seasoning of oak used regardless of where the wood comes from.