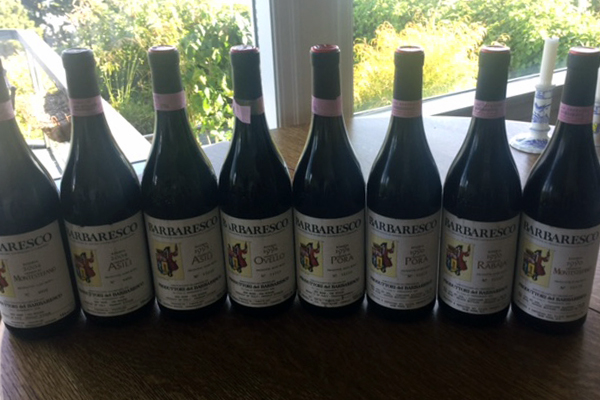 Your scribe is a longtime admirer of and collector of Barbaresco wines from the Produttori co-operative. Founded as a Cantine Sociali by Domizo Cavazza President of the Alba Enological School back in the late 1890s it ceased in the mid twenties but was revived in 1958 and since 1998 is under the direction of the extraordinary Aldo Vacca. Now some 50 grape grower family members totalling around 100 hectares (250 acres – nearly 20% of the DOCG) provide 3 levels of only Nebbiolo grapes for Langhe (younger vines earlier drinking since 1975), Barbaresco (flagship blend of vineyards since 1958) and in only the best years Riserva (“Produttori Crus”) since 1967. Admire the decision that even though 2010 is a great Barolo vintage that it did not show enough body and structure in their Barbaresco crus to bottle as Riservas. They carry on as shown on the bottle back labels: “Only in the very good vintages the best grapes from historical crus (single-vineyards) of the Barbaresco appellation are vinified separately. They are released after 4 years of ageing, as Riserva.”

The nine crus are on steep slopes with classic clay-limestone-marl soil mixes usually rich in calcium. They are each distinct and a joy to taste every vintage while admiring the differences they bring. A concise one word description given by Aldo Vacca for each cru is actually well thought out and often is quite apt:

Since 1990 onwards my favourites for collecting have been in rising order of preference: Ovello (full fresh fruit drinkable younger), Asili (quintessential Barbaresco balanced complete), Rabaja (warmer site higher elevation usually shows complexity on the nose great finesse with elegant finish) and Montestefano (south facing powerful tannic more Barolo-like styling). Recently enjoyed several of the delicious 1990 vintage and the classic 1996 vintage Montestefano in magnum. The latter was all young firm energy powerful evolving intense fruit of the best kind. No rush especially in that format. Contrast 1996 Pora with much softer tannins on the finish. Even 2004s are still youthful with Asili rather tight but showing outstanding breeding there and Montestefano built for longevity with intense colour & fruit with a full very long tannic finish. However with global warming my thoughts on the 9 Crus are changing somewhat. The weather now can be hot enough recently without the need for full south facing vineyards. Hard to generalize but still feel Muncagota & Rio Sordo are slightly simpler terroirs with the last one south-west facing though elegant. Two crus I am now more excited about are Montefico (can age) and especially Paje. The latter has had a really amazing transformation in 2013 and has reached a much higher level of fruit ripeness in spite of the beneficial cooler winds off the river Tanaro still bringing that wonderful brightness to the wine. Love the amazing balance. A winner! In fact all their 2013s are impressive and good value. Recommend you buy some to cellar. 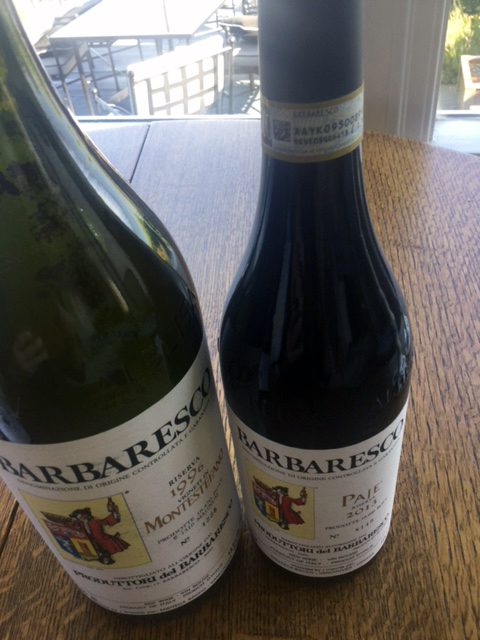 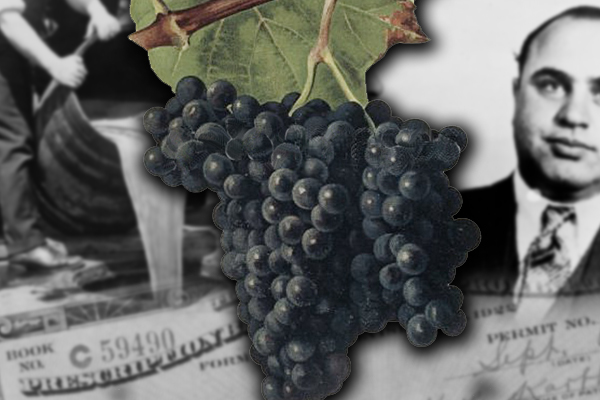 Today Alicante Bouschet, a French hybrid originally designed to darken up poorly colored red wines is nearing extinction. In the United States, this teinturier grape is grown mostly in California’s Central Valley as an extender in jug wines.  Pulpy and sugary, novelist Idwal Jones declared it to be so deplorable that “it ranks somewhat below the gooseberry” while wine critic Frank Schoonmaker said it had “no place in any respectable vineyard and should be eliminated.”

And yet despite all its numerous flaws, would you believe that Alicante Bouschet was at one time the most popular wine grape in America???

To understand how it became so popular, one needs to travel back in time nearly a century ago to the age of Prohibition. With passage of the Volstead Act in 1919, the production, sale and transport of intoxicating liquors became the law of the land. However, there was an important loophole that thousands of citizens gladly took advantage of. Besides never properly defining what constituted “intoxicating liquors,” the act allowed individuals to produce “non-intoxicating cider and fruit juices exclusively for use in his home.” With this legal ambiguity, amateur winemakers sprouted up all across the United States seemingly overnight.  What they needed were some grapes to ferment.

Although Zinfandel was the largest grape in California in terms of vineyard acreage, its skin couldn’t withstand the long and bumpy freight train ride to the lucrative east-coast markets of New York, Boston and Philadelphia for home use. On the other hand, Alicante Bouschet, a Vitis vinifera grape first conceived in southern France during the 1860s by crossing Grenache and Petit Bouschet had a hard and thick skin that easily made it across the country. Of course, this important selling point played a big role in causing vineyard land in the Golden State to jump from $100 an acre in 1919 to $500 a year later as home winemaking shot up by 50 percent during Prohibition.

Another key advantage was the abnormal amount of juice contained in Alicante Bouschet. Unlike other grapes, you could press Alicante two and sometimes three times to yield twice the amount of fermentable juice. And notwithstanding its bland and leathery taste, the red flesh added much needed color to unskillful and shoddy winemakers working on their latest vintage.  According to historian Daniel Okrent in his book Last Call: The Rise and Fall of Prohibition, “On the standard scale used to measure color in grapes, anything that scored over 150 had ‘more than three times the color usually necessary for wine or juice.’ Zinfandel scored a pale 38, cabernet sauvignon a respectable 86. Alicante weighed in at a bruising 204.”  All of a sudden, thin and watery wines made in someone’s basement had the appearance of a standard red.

From 18,000 acres of Alicante Bouschet plantings in 1919, that figure grew to 39,000 acres by 1932 as a growing frenzy took hold—right up until the repeal of Prohibition. With decent grapes being made by professional winemakers again, Alicante was relegated to the dustbin of history; by 1997 a mere 1,600 acres in the Central Valley were dedicated to this grape. Prohibition’s great grape had run its course, being remembered as a grape that gave many thirsty Americans of the 1920s a wine that they probably care not to remember.