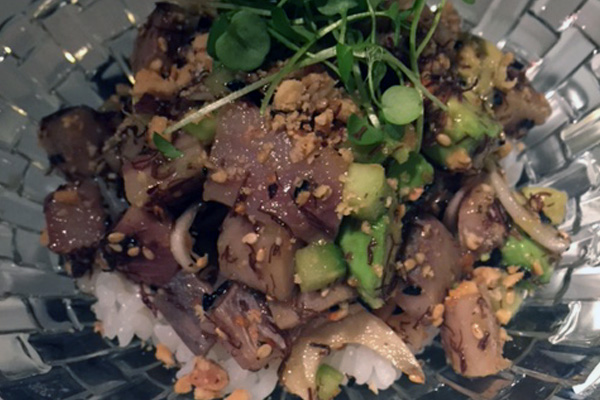 The Unsung Seafood Heroes 2018 February monthly festival feature by Executive Chef Frank Pabst and his talented brigade at Blue Water Café + Raw Bar in Vancouver (part of TopTable Group is most impressive. Wrote it up last year February 13, 2017 on this Blog but it is even better for their annual 14th edition. Expanded from a choice of 11 to 14 innovative dishes with suggested beverage pairings it really highlights under-utilized seafood choices that can be uniquely delicious. Tried 6 of them starting with shellfish intense crayfish “cappuccino” bubbling with vichyssoise poured at the table matched so well with the outstanding fresh 2016 Ava from Le Vieux Pin winery in South Okanagan using a Rhone grapes blend (viognier, marsanne, rousanne) to advantage. Next up a pure herring dish (surprisingly no bones!) “poke bowl” style with Junmai (no addition of distilled alcohol) sake resulting in a good pairing. Perhaps our favourite among all these winners was the amazing “tacos” with crispy fried smelt in a tender golden batter. Excellent recipe to make these ingredients really shine. Pairing the emerging quality winery Sea Star from BC Pender Island of 2018 Stella Maris (blending gewurz, pinot gris & noir, riesling , ortega, and schonberger) brought open perfumed aromatics of ginger with matching limes & cilantro in this dish. Another Junmai sake but Yamahai delivered a stronger earthy mushroom yeast with more acidity to the quite pickled vibrant mackerel in rice paper. Fifth course of poached sea snails (whelk) “au gratin” was divine with that comforting slow cooked sweet ham topped with mornay sauce (béchamel + gruyere) with the new creamy chardonnay from Tinhorn Creek. Comfort food! Finished up with a final course of octopus napped with a Bolognese ragu on squid ink fettucine cleverly matched with a red wine Chianti Classico. Congrats to Wine Director William Mulholland and his knowledgeable team as well. What an amazing 6 course menu progression enjoyed this time. Will have to return to try enticing Slipper Limpet “Paella” & Sea Urchin “Hot Dog”. So commendable to celebrate these lesser known seafood as alternatives for Ocean Wise sustainable choices. Highly recommended.

Encourage you to initiate this worthy idea in your home city. 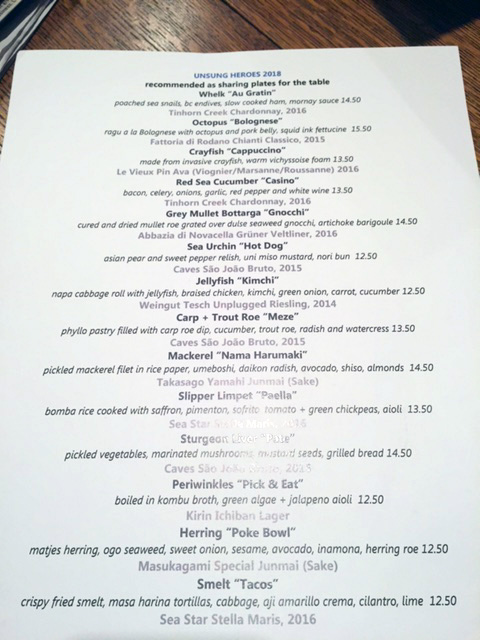 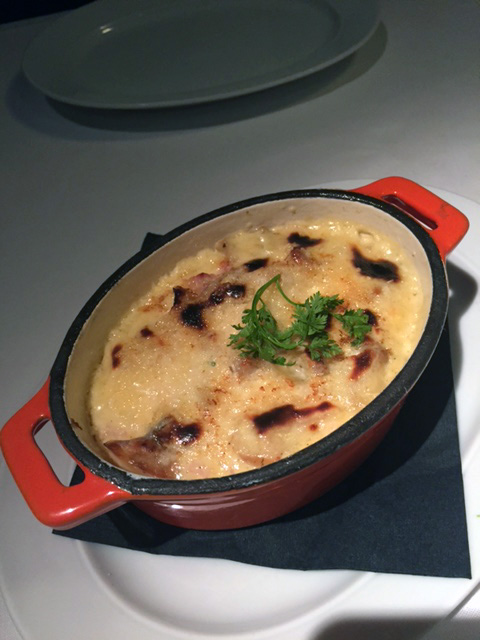 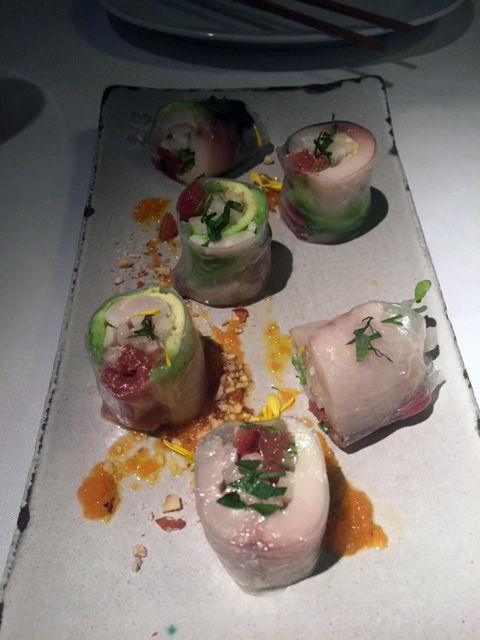 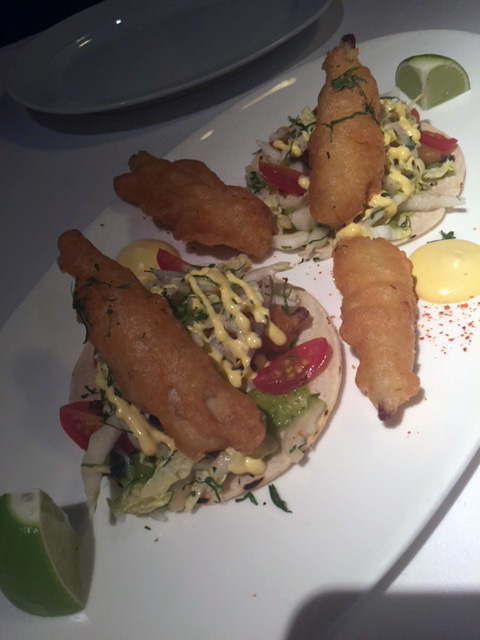 Question: Are the wine terms steen and stein interchangeable?

Answer: You must be from South Africa. No not the same. Steen is the local word there for the grape variety Chenin Blanc. Stein describes a semisweet white wine usually a blend of different grapes but often does contain some steen grapes. 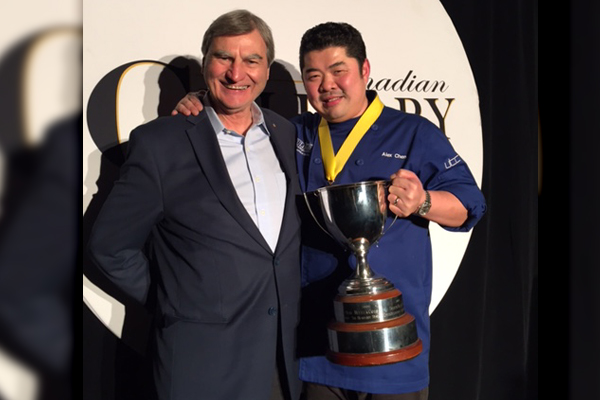 Eleven top chefs in Canada having won during 2017 their Gold Medal Plates regional city cook-offs came together last week in Kelowna for The Canadian Culinary Championships. A very skilled line-up but after three extremely demanding tests the judges (your scribe is one of them) decided the Olympic gold should go to Vancouver Chef Alex Chen of Boulevard, silver to Montreal’s Eric Gonzalez from L’Atelier de Joel Robuchon and bronze to Barry Mooney from Gio in Halifax.

The difficult first leg called for matching a Mystery Wine (turned out to be 2016 Fort Berens Pinot Gris from Lillooet BC) with a dish for 400 guests using a maximum $500 plus a lot of skill and resourcefulness. Chef Chen showed well early with an exquisite terrine composed of a trio of Albacore tuna, Side Stripe Shrimp & Scallop in a dashi sunchoke broth. However his preparation was not without incident as an assigned apprentice dropped a finished tray of 24 just before service calling for some last minute scurrying. Unflappable Alex Chen rose to the occasion without panic showing wonderful leadership for his amazing team that included talented Chef Roger Ma Chef de Cuisine of Boulevard. 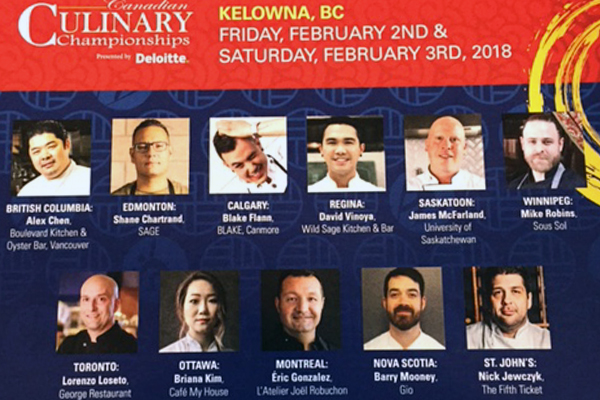 The Black Box second leg calls for great creativity in preparing one dish for the judges in one hour using all 7 ingredients: Fresh BC Rabbit (from Fraser Valley Rabbitry sourced by Two Rivers Specialty Meats), Beausoleil Oysters from New Brunswick, BC Kohlrabi, Saskatchewan Feta Cheese, BC Pink Apples, Summerhill Zweigelt Icewine Grapes, and Manitoba Milled Flaxseed. The chefs struggled with the best cooking method to use for the rabbit in such a short time period. Serving small cut pieces tended to be dry and overcooked. Only Chef Chen risked successfully doing a slow roast of the whole loin in a potato crust with a vibrant grape gastrique, the breaded oyster plus a wonderful refreshing crisp thinly julienned slaw (by hot newcomer Hawksworth Scholarship Young Apprentice 2017 winner Connor Sperling) of apple, feta, and kohlrabi. Another brilliant move.

The Grand Finale brought forth a cornucopia of diverse culinary delights each a star in its own right paired with a chosen wine, beer, or sake. Shining brightly was Alex Chen’s Wild BC Shellfish Parfait with Northern Divine Caviar plus Bull Kelp “Brioche”. Three star Michelin quality with such attention to detail. Delicious! As an avid supporter of the Oceanwise sustainable seafood program you have to be delighted to see not only a listing of the 5 species used in this outstanding memorable dish (Dungeness Crab, Horse Clam, Organic ocean Side Stripe Shrimp, Geoduck Clam, and Sea Urchin) but also the area of catch and even the named source of the boat and captain. So well done!  What a dish.

Congrats to all 11 chefs and their brigades for participating in this excellent competition showing their hard work and admirable culinary skills. Appreciated. 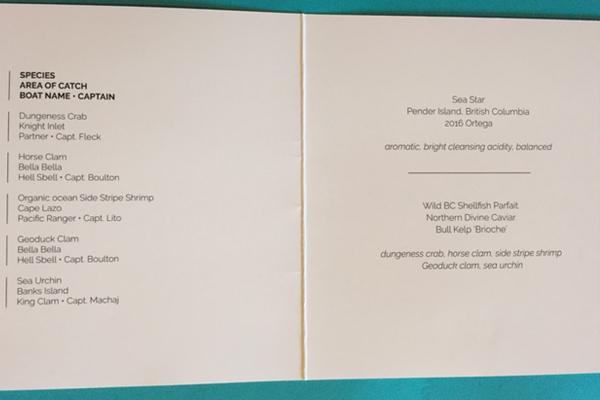 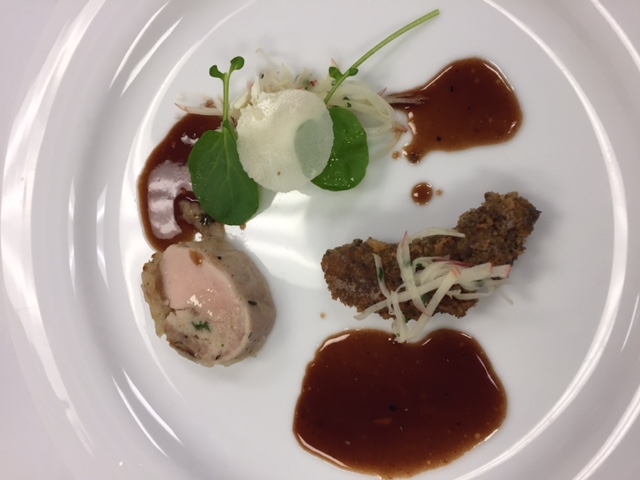 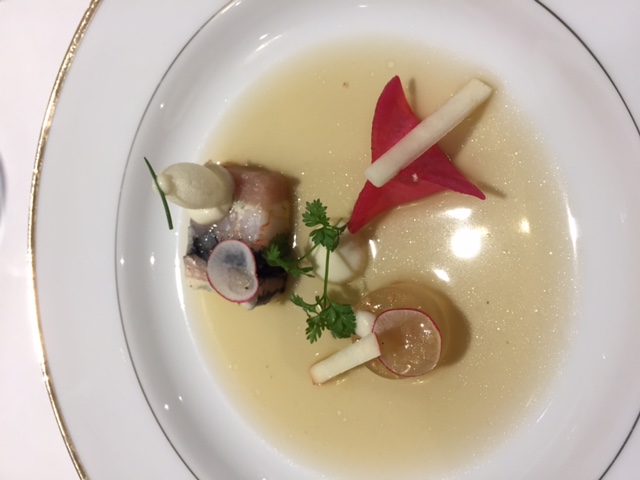 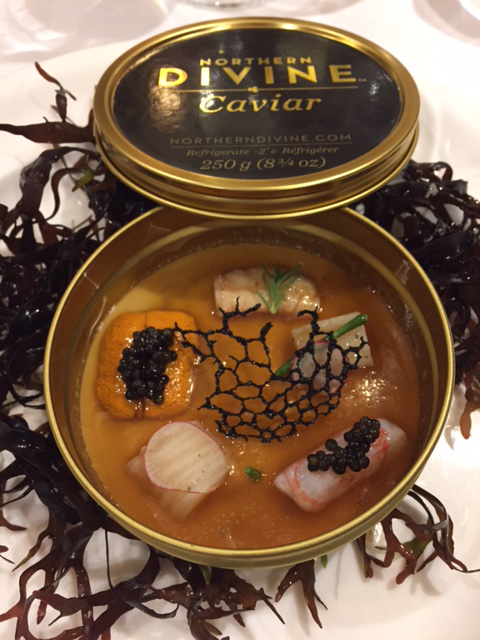