Ask Sid: Why is wine consumption in America down? 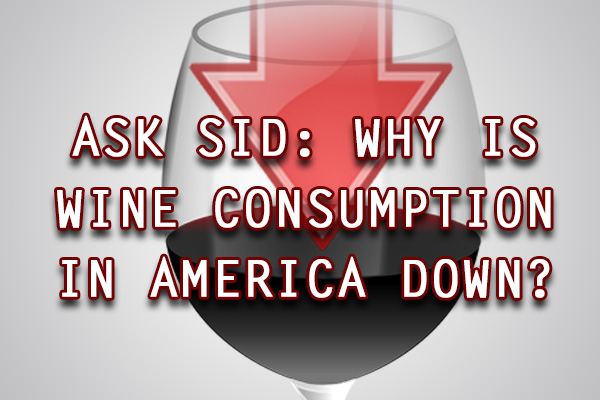 Question: Why has wine consumption in America gone down?

Answer: Yes the figures just released for 2019 show the first decline of overall wine consumption in the USA since 1994. Difficult question to answer because there are lots of factors in play. The biggest one is probably the health conscious awareness of most people but especially the younger demographics. This applies to all their food choices including beverages. Some of it is to be different from what their parents are drinking. Remember the trend of those unique small “POP” Champagne bottles from Pommery perfect on the dance floor! The big boost for decades of “healthy red wine” starting with that CBS 60 Minutes French paradox research in 1991 of the relationship between moderate alcohol and lower heart disease has all but vanished. More consumers now avoid any alcohol at all. Influenced too by stricter “no drinking and driving” laws – those are a good idea. Is legalized cannabis in some jurisdictions being used instead of wine?  A more casual food scene and popular on the go eating is resulting in less sit down dinners with wine which is probably having an affect too. That partially explains the increase in “aperitif” bar scene drinking of spirits and cocktails (but with higher alcohol levels) as well as the continuing strong sparkling sector. Wine production has expanded to so many countries around the world but drinking it remains quite formal in the opening of the bottle, best temperature for service, to the use of the proper glass. Also with so many choices and different price levels it is becoming ever more complicated to understand wine. Others though are drinking wine less frequently and no longer to excess but enjoying more expensive premium better quality. These terroir-driven wines with a sense of place and the intriguing ability to enhance your dining pleasure will always hold a fascination for some of us – one of the joys of life!