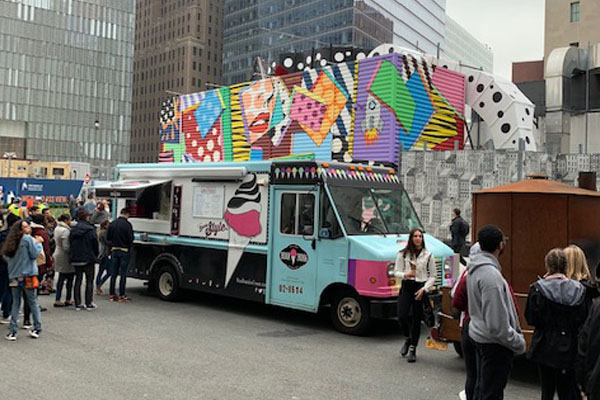 Food trucks are everywhere in many large cities today. The variety of food choices available together with their casual fast take away service is becoming increasingly popular. The concept has now been launched at an even a higher level with Smorgasburg. This past weekend in New York experienced both the new Friday afternoon one outside the World Trade Centre and the original 9th anniversary Saturday food market of over 100 food outlet pop-ups together in East River State Park on the Williamsburg waterfront overlooking Manhattan. Also have a Sunday one on Breeze Hill in nearby Prospect Park. Both were jammed with lots of locals and tourists enjoying the wide food choices ranging so diversely from Sudanese snacks, Jamaican dishes, to Canada’s Flying V poutine. Sampled several dishes with the wood burning Pizzas pretty darn authentic and tasty indeed for $13! Six visiting ones from Osaka Japan was a feature this weekend with choices that included a Piedmont fusion idea of Truffle Tajarin with Clam Dashi broth for $15. Line-ups everywhere with lobster rolls from Lobsterdamus, Big Mozz mozzarella sticks, and watching fascinating Chinese JingBing crepe sandwiches freshly made. Home Frite hand cut potatoes brined roasted and fried with gourmet sauces including home made ketchup were addictive to your scribe. A really fun family outing being enjoyed by so many. It is a worthwhile “foodie” knowledge lesson even if you don’t eat but you will be tempted to try something. Expansion mode is on with Los Angeles, Japan, and Brazil debuting. Perhaps your city will be next. Recommend exploring a Smorgasburg.