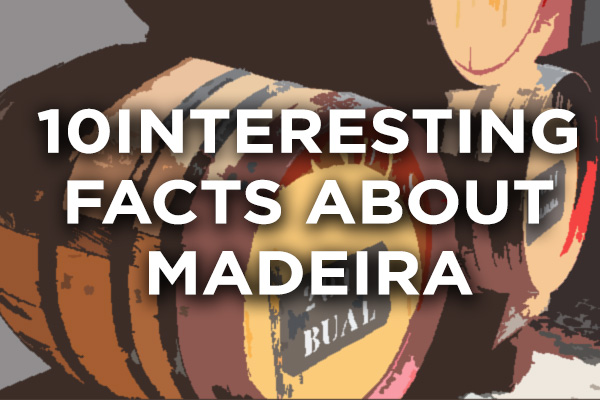 Ever since the discovery of Madeira by Portuguese explorer João Gonçalves Zarco in the early fifteenth century, the island has become world renowned for a toffee-caramel like fortified wine bearing the same name. For hundreds of years, sailors bravely crossed the oceans bringing with them pipes of this exotic drink loved by the likes of George Washington and Thomas Jefferson. Today, whether it’s paired with dessert or used to cook with, Madeira can definitely enhance an evening with family and friends! So have a look below at this wine and its unique history.

1. The wine is named after the island of Madeira, located 370 miles from the Moroccan coast. After being colonized by the Portuguese in 1420, they began planting both sugarcane and grape vines across the island.
blank

2. Madeira became an important outpost for sailors due to the winds that blew from the northeast. With the prevailing winds in the British Isles coming from the west, it would be impossible to sail directly from London to the Americas. As such, Madeira became a vital stop in order to get to the New World, which boosted sales of its wine.
blank

3. Although Madeira is a fortified wine, it started out unfortified. During long voyages across the world on board merchant ships during the 1500s, the wine would spoil while under the intense heat.
blank

4. Using brandy as a preservative by the late seventeenth century, this new and improved Madeira actually got better in a tropical climate, making this wine basically indestructible.
blank

5. Today, in order to simulate this heating effect, the wine goes through a process known as estufagem. This involves placing the wine in casks, vats or cement tanks where the temperature is set to an average of 105 degrees Fahrenheit for anywhere from three to six months. Fine Madeira however is heated naturally.
blank

6. Because of Madeira’s near-invincibility, it became a hit in the southern colonies and coastal towns such as Charleston and Savannah. One blend that proved to be extremely popular included the addition of rainwater to slightly dilute the wine. “Soft as rainwater” became the saying!
blank

7. The founding fathers of the United States drank Madeira after signing the Declaration of Independence.
blank

8. With over 5,000 acres of vineyard land, which produce approximately 38 million gallons on an annual basis, just 10 percent are planted with the four noble varieties—Sercial, Verdelho, Boal and Malmsey.
blank

By Alexander Baxevanis (Flickr: Vineyards) [CC BY 2.0 ], via Wikimedia Commons

9. After phylloxera hit the island, the Portuguese opted for cheaper grapes and hybrids to replant. As a result, nearly half of all Madeira production today comes from Tinta Negra Mole, which can be used either to drink or to cook with.
blank

10. Although extremely popular in the eighteenth century, Madeira faced tough times as shipping technology evolved, no longer requiring vessels to stop there. Also, with the Russian Revolution and American Prohibition, the wine lost two of its biggest markets during the twentieth century. However, interest in Madeira appears to be gaining steam again!