The Wine of Patriots: 5 ways Madeira shaped the American Revolution 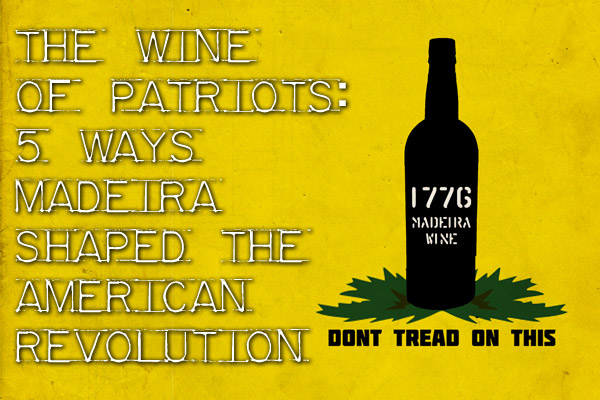 Every student who studies the American Revolution in school learns about patriots throwing tea into Boston Harbor, the first shots fired at Lexington and Concord and General George Washington leading his troops across the Delaware.  But often overlooked is the pivotal role that Madeira—a fortified wine made on a Portuguese archipelago bearing the same name—played during this tumultuous time.   Legend has it that after signing the Declaration of Independence, its authors celebrated their newly minted nation with a toast of this liquid pleasure.   That’s because revolutionaries all grew especially fond of this drink, as it came to symbolize their righteous struggle against the rule of King George III.   Here are five reasons why it became so popular in the thirteen colonies while helping to plant the seeds of revolution.

With no domestic wine industry, America’s first oenophiles were at the mercy of British sanctioned exports—and more importantly, British taxation.  In order to drink Bordeaux or Champagne during this time, one would have to pay a sizable duty, making this beverage accessible only to wealthy colonists.  But because Britain had an exclusive trade deal with Madeira following the marriage of King Charles II to Portuguese princess Catherine of Braganza, all wine produced on these islands was exempt from any harsh taxation.  It was no surprise then that sales of Madeira skyrocketed throughout the colonies as an affordable alternative to more expensive European wines. With resentment against British policies reaching a boiling point, this drink came to symbolize what “taxation with representation” might look like following independence.
blank

Imagine you’re living in the southern colonies during the pre-revolutionary period.  The heat can be unbearable during the summer months while refrigeration is still years away from becoming a reality.  Wine sent across the Atlantic Ocean is frequently ruined by the rocky voyage and the odds of it lasting through a humid summer without turning into vinegar are miniscule.   That is, unless it’s Madeira!

While sailing the seas, ship captains discovered that despite the intense heat and constant movement on board, Madeira, unlike other wines, actually improved under these conditions.  Describing its almost infinite lifespan, author Benjamin Wallace in his book The Billionaire’s Vinegar writes, “it became common for advertisements for barrels of Madeira to boast of the miles they’d traveled, the distant port seen … it was impossible to ruin something that had, essentially, perfected the taste of ruin.  Further oxidation is simply making Madeira more like itself.”  So in addition to its attractive price tag, colonists had found a drink that could endure both a Boston winter and a Georgia summer.
blank

Asked to name the key events that led to the American Revolution, many will bring up the Boston Massacre of 1770 or the Boston Tea Party of 1773.  But another incident that proved to be just as critical in fostering the revolution was the Liberty Affair—an important turning point in American history during which Madeira played a central role.

Before John Hancock became famous for his signature, he was a Boston merchant and alleged smuggler who constantly thumbed his nose in the face of British tax collectors.  On May 9, 1768 however, his sloop Liberty arrived with 25 pipes (large wooden barrels) of “the best sterling Madeira,” just one quarter of the vessel’s carrying capacity.  Believing that he had unloaded the rest without paying the required duties, the ship was seized and Hancock was charged with smuggling.  This resulted in one of the worst riots in Boston’s history when colonists, already infuriated with the Royal Navy for impressing them, violently revolted in the defense of Hancock and his supposedly smuggled wine.  Call it the Boston Madeira Party!
blank

During his time in office, President George Washington became one of the nation’s first entrepreneurs by distilling whiskey at his home on Mount Vernon.  Due to this fact, Washington is often misrepresented as a fan of spirits when his true passion was for “the rich oily Madeira” as he described it, drinking up to three glasses a day and even before heading into battle.  A possible reason for this were the chronic toothaches that haunted him throughout his entire life.  In the days before modern dentistry, the near 20% alcohol contained in Madeira proved to be a decent numbing agent for the president’s pain.
blank

Arguably, America’s greatest diplomat was Ben Franklin who successfully lured France into the fight against the British, tipping the scales in favor of the rebellious thirteen colonies.  And just like Washington, Adams and Jefferson, Franklin enjoyed drinking Madeira, even having a glass at his elbow while he helped to write the Declaration of Independence.  But his negotiating skills and love for Portuguese wine didn’t stop there.

Needing some firepower to defend Boston, Franklin met with New York Governor George Clinton who was timid over the request.   After a few glasses of Madeira, however, Clinton quickly succumbed to the powers of persuasion.  “He at first refus’d us peremptorily; but at dinner with his council, where there was great drinking of Madeira wine … he softened by degrees, and said he would lend us siz.  After a few more bumpers he advanc’d to ten; and at length he very good-naturedly conceded eighteen,” wrote Franklin in his autobiography.