10 things I learned about the restaurant business by reading Kitchen Confidential! 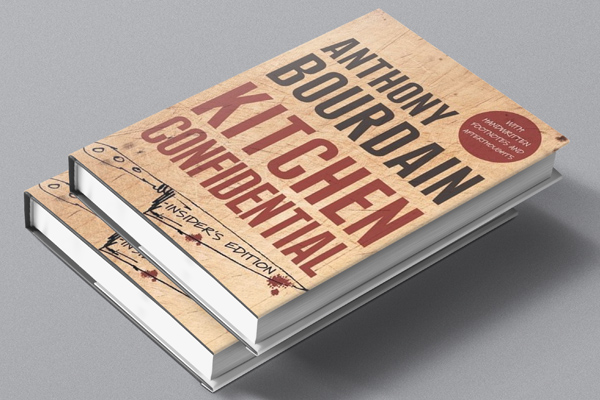 Earlier this month, the culinary world lost well-known television personality Anthony Bourdain. The host of CNN’s Parts Unknown, he was described as the Hunter S. Thompson of gastronomy, providing the antithesis to an industry glamorized on TV by photogenic celebrity chefs. “Of all the professions, after all, few people are less suited to be suddenly thrown into the public eye than chefs,” wrote Bourdain.  “We’re used to doing what we do in private, behind closed doors. We’re used to using language that many would find … well … offensive, to say the least.”

Although known as the host of several television shows, Bourdain first rose to stardom in 2000 after writing the book Kitchen Confidential, an extended sequel to a New Yorker article he penned in the late 90s. Speaking in a language known as Kitchenese, the book offers readers a gritty and unfiltered look at a craft that Bourdain felt was being misrepresented in the mass media. A runaway best-seller, those in the trenches could easily relate to the numerous anecdotes—many of them coarse and profane—that he described in his three decades as a chef.

Let us share ten observations he made about the restaurant industry in this classic text! While times may have changed and his opinions are certainly not universal, it’s worth noting what made Kitchen Confidential a must-read for both aspiring chefs and those with an interest in the culinary arts.

1. Never order fish on a Monday!

According to Bourdain, the best restaurants typically order seafood on Thursday for Friday delivery. Hoping to sell the bulk of their inventory on Friday and Saturday—the two busiest nights—whatever isn’t sold (and may be turning) is served the following Monday before the next shipment arrives. “If he has a little left on Sunday, he [the chef] can unload the rest of it then, as seafood salad for brunch, or as a special. Monday? It’s merchandizing night, when whatever is left over from the weekend is used up, and hopefully sold for money.”
blank

For many, Sunday brunch is a cherished ritual as diners eagerly line up to fill their plates at the various buffet stations. But not so fast says Bourdain ,who had a much different perspective: “Brunch menus are an open invitation to the cost-conscious chef, a dumping ground for the odd bits left over from Friday and Saturday nights or for the scraps generated in the normal course of business.”
blank

Additionally, with restaurants having their starting rotation of line cooks working on Friday and Saturday nights, the walk-ons are directly sent to the bush leagues of dining: brunch service. “Brunch is demoralizing to the serious line cook. Nothing makes an aspiring Escoffier feel more like an army commissary cook … than having to slop out eggs over easy with bacon and eggs Benedict … Brunch is punishment block for the ‘B’ Team cooks.”
blank

When walking into a restaurant for the first time, a good tip is to check the bathroom before sitting down at your table. Why? Because the bathroom serves as a microcosm for the establishment at large when it comes to cleanliness. “If the restaurant can’t be bothered to replace the puck in the urinal or keep the toilets and floors clean, then just imagine what their refrigeration and work spaces look like. Bathrooms are relatively easy to clean. Kitchens are not.”
blank

If you’re someone who likes his meat well-done, then expect to be eating the absolute worst cut that the chef has pushed to the side in hopes that you enter his restaurant. “Save for well-done” Bourdain explains is food served “to some rube who prefers to eat his meat or fish incinerated into a flavorless, leathery hunk of carbon, who won’t be able t tell if what he’s eating is food or flotsam.”
blank

So what happens if nobody eats the bread on your table? Does it go in trash? Yes, for some places, but others, not so much. “When it’s busy, and the busboy is crumbling tables,” writes Bourdain, “and he sees a basket full of untouched bread, most times he’s going to use it. This is a fact of life.”
blank

7. Just say no to hollandaise sauce

Many of us love to pour delicious creamy hollandaise sauce all over our Eggs Benedict. However, when at a restaurant, all bets are off due to it being a magnet for bacteria says Kitchen Confidential. “Hollandaise must be held at a temperature not too hot nor too cold … Unfortunately, this lukewarm holding temperature is also the favorite environment for bacteria to copulate … Nobody I know has ever made hollandaise to order. Most likely, the stuff on your eggs was made hours ago and held on station.”
blank

8. Keep an eye out for the delivery truck

If you have a keen attention for detail, you’ll always be on the look out for whenever a delivery truck parks behind a restaurant. The reason has to do with the sign—or lack of sign painted on its side. “If you see sinister, unmarked step-vans offloading all three [seafood, meat and produce] at once, or the big tractor trailers from one of the national outfits—you know the ones, ‘Servicing Restaurants and Institutions for Fifty Years’—remember what institutions they’re talking about: cafeterias, schools, prisons.”
blank

When deciphering a menu that is potentially full of booby traps, the waiter or waitress could end up being your best friend. Use this person to your advantage says Bourdain as they can help guide you through some potential murky waters. “If he [the waiter] likes you, maybe he’ll stop you from ordering a piece of fish he knows is going to hurt you … Observe the body language and take note.”
blank

10. The best night to go out? Tuesday of course!

On the surface, it would appear that Friday and Saturday, the two busiest nights for restaurants would be the ideal time to see a seasoned chef at their very best. Not so according to Bourdain: “the food is fresh, but it’s busy, so the chef and cooks can’t pay as much attention to your food as they—and you—might like.” On the other hand, Tuesday is when the fresh product comes in, the chef is well rested from a hectic weekend, and is eager to please his diners. “Weekday diners … are the home team—potential regulars, whom all concerned want to make you happy.”
blank