Where in the world is one of the coolest wine cellars? 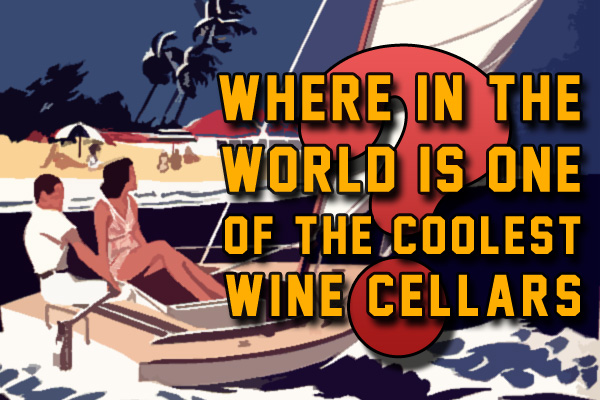 Imagine a truly daunting wine cellar containing more than 250,000 bottles from approximately 400 vintners in fifteen different countries. With a list that’s over eighty pages long, this collection has everything from the more recent vintages to some nineteenth century rarities like an 1865 Château Lafite and an 1875 Château d’Yquem—two bottles that command five and even six figures from collectors. Being so extensive, one might think that this cellar is located in some grand European castle, owned by a rich oligarch with a penchant for only the finest wines.

If that was your guess, then you’ll be surprised to know that this incredible collection is actually located just three hundred kilometers southeast of Miami, Florida.

Famous for its sunny beaches, high-stakes gambling and a mega-resort called Atlantis, at first glance, the Commonwealth of the Bahamas appears to be an unusual spot for such a massive selection. Possessing a warm and winterless climate that attracts scores of tourists year-round, this ex-British colony is known more for serving up frozen margaritas and daiquiris as opposed to first growth Bordeaux. However, when you examine the country’s unique history, it begins to make sense that one of the world’s largest wine collections would be located on this island paradise.

Dating back more than three hundred years, the Bahamas became notorious for attracting swashbuckling pirates such as the infamous Blackbeard. And although the British Empire successfully clamped down on piracy by the early 1700s, the remnants of this nefarious past can still be seen, especially on the island of New Providence where a Georgian-style mansion stands on top of a hill so its pirate owner could be on the look out for all incoming ships. Known as Graycliff, it was originally built by Captain John Graysmith, a vicious individual who plundered Spanish galleons throughout the region (and probably took home quite a few bottles of wine as a result). Changing hands several times, Graycliff’s cellar was even used briefly as a brig by the Continental Navy when they occupied Nassau during the American Revolutionary War. But it was Prohibition that made the Bahamas a prime destination for dry Americans eager to get their hands on some alcohol. 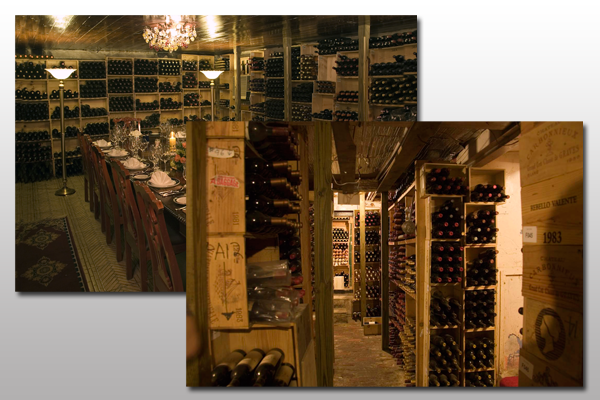 According to historian Daniel Okrent, this Caribbean destination became a colossal boomtown in the 1920s with approximately ten million quarts of liquor passing through Nassau every single year. “According to a dispatch in the Times of London in March 1920,” writes Okrent, “the liquor business had already ‘transformed the Bahama Government’s financial condition as if by magic from a deficit to a comparatively huge surplus.’” Much like the French St. Pierre and Miquelon islands, colonial outposts situated in the Western Hemisphere essentially became one giant warehouse, storing all the wine and spirits from Europe that Americans were not allowed to consume until the Volstead Act was repealed in 1933. Impressive collections like the one at Graycliff—which also served as a hotel catering to this thirsty clientele—would be built and sustained as the economy morphed from rum running to tourism.

Becoming a private residence in 1937, the ownership of this mansion would change hands several times. Today, Graycliff is both a hotel and restaurant where its wine cellar is open to the public. In fact, the cellar can be booked for private tastings and dinner for up to eighteen people. So if you’re ever in the Bahamas and are looking to venture off of Paradise Island, check out this collection, which is steeped in three centuries of rich history.

Question: What’s the best wine to serve with pasta filled with a potato and old yellow cheese?

Answer: Should be a delicious dish with almost any wine you choose! You describe a ravioli type pasta but don’t mention using any sauce on top and if there is a spicy tomato or rich cream sauce this would make a difference in more specific wine recommendations. However potato and cheese pasta should be easy for pairing (unless your cheese is a rather strong Cheddar or Mimolette) and will be excellent with most of your wine choices. Various pasta is something I enjoy regularly often a Primavera with vegetables including San Marzano roasted plum tomatoes, grilled eggplant and Parmigiano Reggiano shards with lots of quality fresh extra virgin olive oil. I find almost any wine works with it. Naturally an Italian choice will be appropriate. At the great River Café in Hammersmith outside London in England they still limit their wine list to only Italian with versatile choices from the expanding 20 main regions. Common choices for your dish would include a wide choice from pinot grigio, a fuller chardonnay or white Burgundy, pinot noir or red Burgundy, and the savoury sangiovese variety perhaps a Chianti Classico or the newer Gran Selezione. However there also are many New World reasonably priced wines that also would work well to enhance this pasta. Suggest you experiment with various wine types and find the flavour match you enjoy the best together. 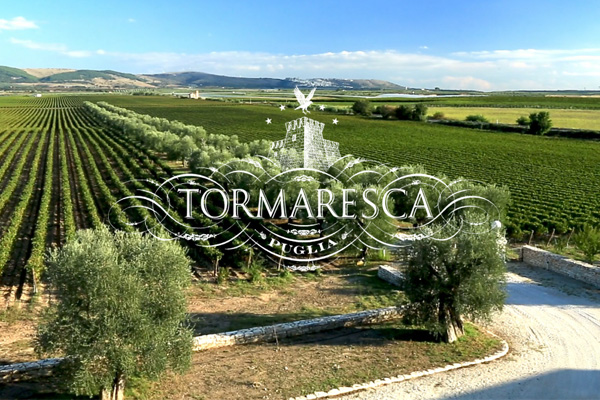 Interesting update with the personable Vito Palumbo Brand Ambassador for Tormaresca (www.tormaresca.it) in Puglia (“at the heel of Italy`s boot”) at the 38th Vancouver International Wine Festival end of February 2016. Always a big fan of their fragrant balanced Extra Virgin Olive Oil made from Cellina & Coratina olives. Their Puglia wines have traditional Greek origins with native (autochtonous) varieties like Primitivo & Negroamaro but with modern viticulture techniques and non-native varieties developed by the Antinori family since 1998 are showing fresh expression unique for the region. The Estate has two main wine growing areas:

2. Salento DOC: Masseria Maime Estate of 250 hectares under vine (plus 85 in olive trees) near San Pietro Vernotico (Brindisi) up to 900 metres with principal grape varieties Negroamaro (Calafuria Rose and also a red Morgicchio of dark fruits with 14 months in barrique), Chardonnay, Fiano (Roycello has lots of freshness and 3 months lees contact but different from the minerally Fiano from Campania on volcanic soils), Cabernet Sauvignon, and Primitivo (Torcicoda label has lower yields showing riper spicy prunes fruit with 12 months in barrique where malolactic takes place).

Also look for 2 special wines using grapes from both regions in a blended Chardonnay Puglia with barrel fermentation and then transferred to stainless before bottling showing citrus, apples and pear; and Neprica using Negroamaro, Primativo, and Cabernet Sauvignon is round with spicy dark fruits.
Tormaresca is a producer with some under the radar top quality Italian wines at reasonable prices. Check them out!

Looking back at 5 food trends from the 80s 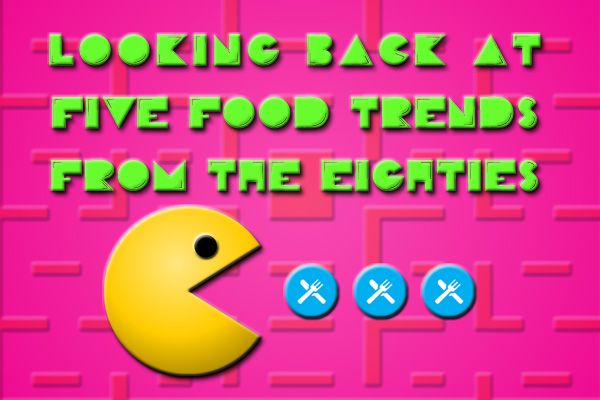 One of the most popular blog entries last year according to Google Analytics was our look back at five wine trends from the 1980s. It seems there’s quite a thirst (no pun intended) for nostalgia online as we profiled everything from wine coolers to buttery-flavored chardonnay.   And since the eighties were known for their fair share of movie sequels, it’s time we do a follow up and see what people paired with their Beaujolais Nouveau and ‘82 Bordeaux. So sit down and relax as we examine five popular food trends as morning dawned throughout America.

As the 80s progressed, a dual income household was increasingly needed to stay part of the middle class. Forced to put in a forty-hour work week on top of all the daily chores, wives across the United States complained bitterly to their spouses about essentially working a double shift. Being stretched so thin, a casualty of this new economic reality was the home-cooked meal as the balance of power shifted from the stove to the microwave. “The act of eating—once a leisurely undertaking synonymous with pleasure and social interaction—has been reduced to a necessary function not unlike shaving or refueling a car,” wrote New York Times reporter Dena Kleiman.

Not surprisingly, this strong demand for speed and convenience resulted in an explosion of microwave dinners, frozen foods and out-of-the-box meals. Of course, if that was too much work, the nation’s fast-food industry was ready to serve up a record $60 billion dollars in annual sales by 1988 as home delivery skyrocketed. Ironically, while we tend to think of the eighties as a time when people started hitting the gym and eating right, this period also saw a sharp rise in obesity rates, caused largely by this kind of unhealthy consumption.

During the 1980s, another strange dichotomy occurred: more and more people became interested in food—even as they cooked less and less. Throughout the decade, books like Paul Prudhomme’s Lousiana Kitchen and Martha Stewart’s Entertaining became massive best sellers while new magazines like Food & Wine informed us all about the latest dining fads. Suddenly, reading reviews from your local critic was akin to following your favorite sports team. As yuppies dominated the cultural landscape, having reservations at the most fashionable restaurant or hosting a party that featured the latest trends for your guests to indulge in was far more important than actually knowing how to cook.

With young urban professionals seeking out only the hippest dishes, a rice-based delicacy from Japan known as sushi began its meteoric rise in restaurants across the nation. During the same time that this Asian tiger eagerly bought everything from Rockefeller Center to Columbia Pictures, its culinary influence—personified by raw fish—was also leaving a mark on many American palates. Benefiting greatly from those who demanded healthier alternatives to fast food, sushi quickly became one of their preferred dishes. “The eighties were the time in which Japanese food came of age,” writes author David Kamp. “With diet-conscious Americans warming to sushi as ‘pure, clean, healthy, something that goes with organic’ … and status-conscious Americans eating raw fish just because it was cool to do so; it was a mark of hipness.”

4. The arrival of Tex-Mex

In addition to sushi, other exotic dishes from the Southwest, known as either Tex-Mex or Cal-Mex became all the rage in both restaurants and grocery stores during the 1980s. Whether it was just simple chips and salsa or more regional offerings like blue cornmeal, jicama or squash blossoms, Americans couldn’t get enough of Mexican inspired food. Suddenly, Santa Fe became a sort-of culinary ground zero with food writer M.F.K. Fisher stating in 1987, “If I hear any more about chic Tex-Mex or blue cornmeal, I’ll throw up.” However, this was not just another 80s fad: by 1991, salsa had replaced catsup as the number one condiment in the United States.

One of the few positive things to come out of the disastrous 1984 World’s Fair in New Orleans was Paul Prudhomme, the vibrant owner of K-Paul’s in the French Quarter and one of the very first “celebrity chefs.” Giving many Americans an introductory course on Cajun and Creole dishes, his popular cookbooks and larger-than-life personality helped to fuel a massive renaissance in Louisiana cuisine—a trend that was followed up by his young protégé Emeril Lagasse, who kept on reminding us to “kick it up a notch!” With gumbo and crawfish being consumed all over the country, the whole idea of food tourism took off as many aspiring foodies made their pilgrimage to the Bayou in order to try some authentic Southern cuisine. And the most popular dish to emerge from this era was blackened redfish. Dipped in clarified butter and seared in red-hot iron skillets, it became so popular that redfish was soon put on the endangered species list.

Ask Sid: How do I identify the different acids in wine?

Question: What can I do to help me identify the different acids that are found in wine?

Answer: Practice and experience. A useful rough guide I suggest to get there is to be become familiar with the smell and taste of the following items:

Hope this helps you.