The Vintage of the Century: Revisiting the impact of 1959 Bordeaux 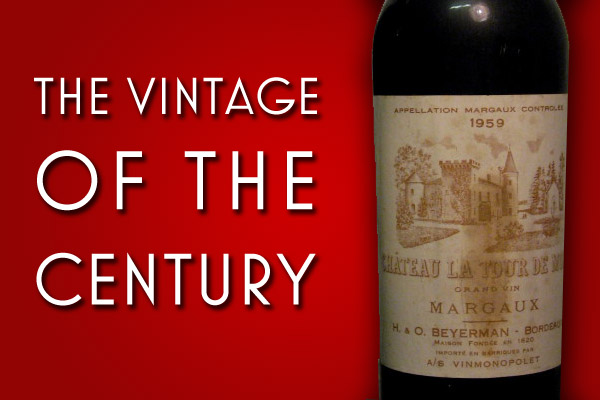 “From the Golden Slope of Burgundy to the chateaux of Bordeaux, 1959 will be remembered not as the year of De Gaulle and Algeria but as the year of the Great Wine,” declared Time magazine. “A boon to the grapes, and not only has it been a great year in quality, but in quantity as year,” wrote the influential humorist Art Buchwald. With an exceptional summer, it appeared that nineteen fifty-nine was turning into something truly remarkable across the vineyards of Bordeaux. And brilliantly capitalizing on all of this free publicity, French winemakers ceremoniously dubbed it “The Vintage of the Century,” a title that unleashed a wine renaissance throughout the United States.

For the Bordelais, the good news couldn’t have come at a better time. The previous year had produced a small harvest and the year before was so bad that France was actually forced to import wine. In terms of quality, the vintages of the late 1950s were so awful that many in the newly created Fifth Republic chose beer instead of wine when visiting the local watering hole. Back in America, a young enthusiast named Robert M. Parker Jr. concurred when tasting a bottle of 1957 Château Lafite-Rothschild. Remarking it “tastes like cat piss,” Parker learned that with no rating system, first-growth Bordeaux’s like Lafite could easily coast on their reputation despite having such a subpar product.

But with news about the vintage of the century spreading like wildfire, American wine drinkers finally decided to enter the marketplace in a big way. During the 1950s, as oenophile culture started to gain steam on the east coast, the train of thought was that French wine was the undisputed gold standard. And with a devaluation of the franc ordered by Charles De Gaulle, U.S. dollars could now snatch up a sizable chunk of Bordeaux’s exports, which for seven and a half centuries had been dominated by the British.

For those who took advantage of the situation, they would not be disappointed. Michael Broadbent described the 1959 Château Lafite as “one of the best-ever Lafites … mammoth. And superb” while calling the Château Latour: “Glorious … perfect enough to keep on maturing for another quarter century.” According to Parker, “The wines do display the effects of having been made in a class, hot, dry year, with just enough rain to keep the vineyards from being stressed. They are full bodied, extremely alcoholic, and opulent, with high degrees of tannin and extract.”

So long before terms like ‘vintage of the century’ had been used ad nauseam, the marketing slogan proved to be a resounding success in places like New York and Washington D.C. By 1961, the price of first-growths had more than quadrupled with Americans for the first time becoming the principal buyers. Adding to these soaring prices was a futures market—something that would have been unheard of in the United States a decade before—making many British customers irate. Describing the mood in England during this time, author Elin McCoy writes, “The international market was now being built on these high prices, and if the Americans dropped out it would surely crash. Who else but the Americans would pay so much money for wine?”

Looking back at the craze over the vintage of the century, many wine writers believe that 1959 didn’t live up to its hype, especially when compared to 1961. However, no one can deny the impact that this vintage had on buying habits in the United States, signaling a seismic shift in the export market for French wines that is still felt to this day.