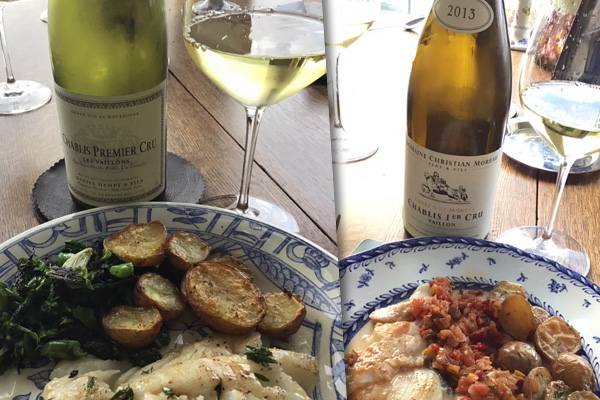 As followers of this blog know well your scribe has been a long time big fan of Chablis. Remember so well buying in December 1977 at a British Columbia liquor store all 86 bottles on sale of 1976 Chablis Vaudesir Grand Cru by J. Moreau at $8.05 each. Over the next 10 years they were all opened consuming the last marvellous one with fresh Petrale sole on September 20, 1987. My cellar book notes show a lot of bottle variation as some corks looser and some tighter than others plus differences in ullage resulted in higher fills being much more dependable. However the inital light green colour showing so much glycerol legs inside the glass with high acidity brought with ageing increased rich complexity. Even back then our exciting passion was further enhanced by pairing Chablis with food – from seafood to cheeses. So admire those Grand Cru Chablis!

This Chablis love-in has continued even more frequently over the many years since and especially over this last month with the first fresh wild Sockeye salmon of the season, Sablefish, and Dungeness Crab available – three really outstanding matches for Chablis. Enjoying so much the outstanding quality for price from excellent producer Christian Moreau Grand Cru Right Bank vineyards – particularly my favs of Les Clos & Valmur. However also use their fresh minerally Premier Cru Vaillon with mature vines though prefer even more the specific lot within that vineyard of Cuvee Guy Moreau with vines almost twice the age planted in 1934 by current winemaker Fabien Moreau’s grandfather. Not only are they very old vines but are also located on the steepest part of this Left Bank slope with good drainage and south & south-east exposure on Kimmeridgien clay. So pleased they made the important decision to keep this separate and continue to do so. I have noticed that this Cuvee (which IMHO competes for best 1er Cru with Montee de Tonnerre next to Blanchots & northern end Vaulorent a special part of Fourchaume next to Les Preuses) needs time but has a wonderful rich intensity often showing a bit more wood initially. It is a textbook example of what very old vines can bring to the overall complexity of the resulting wine. Congrats! Lately I have had several bottles of the 2012 with lively verve and rich full intensity that rivalled their 2012 Les Clos for perfection right now. The 2010 is a richer more mature year, 2011 & 2013 somewhat simpler while the 2014 has perfect vital Grand Cru-like balance with depth and 2015 is forwardly riper. The 2016 use those Diam composite corks to advantage. In 2017 frost really affected the Grand Crus with very low yields and total production but mainly spared Vaillon. Therefore highly recommend buying some Vaillon Christian Moreau in 2017 – and worth the search to find some of that special Cuvee Guy Moreau! Old vines can make a big difference moving a Premier Cru to a Grand Cru look alike!