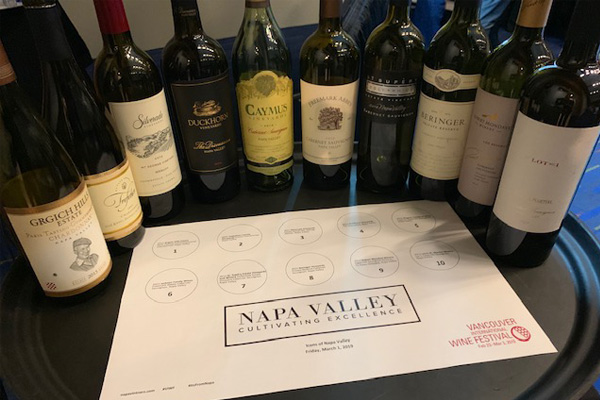 1. 2015 GRGICH HILLS ESTATE Paris Tasting Commemorative Chardonnay by Maryanne Wedner Director of Export. With her 37 years experience Maryann related stories of Mike Grgich starting back in Croatia stomping grapes and trying half water and wine as an “active child”. Later a Zagreb oenology professor told him California was “Paradise” so he embarked via Germany & Canada (including Catholic Boys School in Vancouver) before getting his Visa to USA and a long wine career in California. 40th anniversary of 1973 Ch. Montelena chard winning Paris 1976 tasting in 2016 so used this 2015 vintage first released in Japan using Wente clone mostly planted in 1989 from a small part of their cooler marine influenced Carneros Estate with no malo and no air but battonage by spinning the special barrels every Friday afternoon. Textbook fine example.

2. 2005 TREFETHEN FAMILYVINEYARDS Estate Chardonnay by Jon Ruel CEO. Oak Knoll fruit off their Estate with 9 months in French oak (30% new) plus 30% malo at 13.8. Try in the vineyard to slow down the ripening process to preserve acidity. Mature “evolution on the nose of nutty, hazelnut, marzipan, hay but still dancing with natural acidity in 2005 and sort of fun rich flavours”.

4. 2015 DUCKHORN VINEYARDS The Discussion by Brian Bostwick Director of Export. Started in 1978 with 800 cases of cab sauv & famous Three Palms Merlot. Have purchased 300 acres over 30 years. This started in 2006 choosing top fruit from 6 or 7 vineyards in different AVAs for balanced Bordeaux blend (57CS/37M/5CF/1PV) with 18 months in French oak.

9. 2014 ROBERT MONDAVI WINERY Cabernet Sauvignon Reserve To Kolon Vineyard by Mark de Vere MW. Triple selected fruit cold soaked fermentation and extended maceration in French oak of 93%CS/6CF/1PV. Mark gave a lot of credit to Robert who knew the region from moving there in 1937 and founding his winery in 1966. Robert’s insight was key that To Kolon (Greek “the beautiful”) vineyard was “the sweet spot for Napa cab because ripe but still bright fresh fruit too with evening winds and soils that drain well.” Still drinking their memorable complex 1974 & 1991 killer vintages and here is another winner. Mark says this is “powerful & gentle that you can drink now but will age well too. Flows across the palate and fills the mid-palate with that special Mondavi 6% cab franc.” Recommend you cellar some.

10 2012 LOUIS M. MARTINI WINERY Lot 1 Cabernet Sauvignon by Scott Kozel VP of Premium Winemaking. Best fruit chosen for this 100% cab sauv is expensive with 2014 Lot 1 selling presently at Ontario LCBO for $234.35 per bottle and the 2015 released at the Winery for $175 US. Classy vineyards used for this from 45% iconic Stagecoach “carved out of the rocks where there is lots of wildlife but no flowers” in Atlas Peak plus 21% Stag’s Leap and balance Spring Mountain & Silverado Bench with 21 months in 90+% French oak. Scott says they look for “density plush fruit style wine that you can approach early but will age well”. Cult wine!

Congrats to the whole team at @VanWineFest and especially all the volunteers for another outstanding Wine Festival. Look forward to France spotlight in 2020 February 22 to March 1.