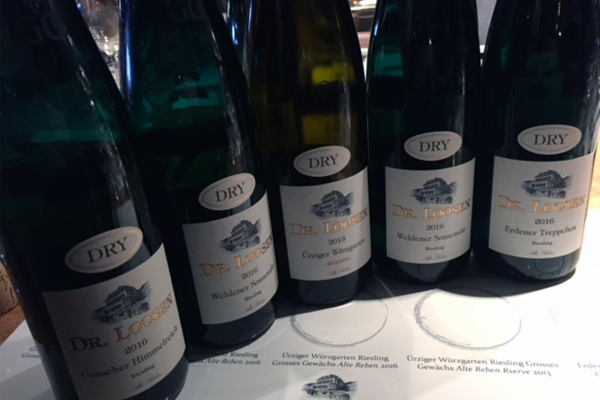 Ernst Loosen is an outgoing exciting personality in the German wine trade. His fascinating story of “not being clever enough to go to college but instead inheriting the farm” is an endearing one. You have to give him credit though for taking inspiration from his grandfather’s old winemaking methods for only making dry wines and sticking with those very low yielding old un-grafted on their own roots vines. Most consumers only know his popular big selling Dr. L line of Riesling from non-estate fruit in a refreshing style of dry, off-dry, or Sparkling wine at good value. However he does make some higher priced truly outstanding wines under the Dr. Loosen label as well. Remember drinking and enjoying over the years some special wines he brought in for our Vancouver International Wine Festival back in 2006. Especially 2004 Urziger Wurzgarten Riesling Spatlese from those red volcanic and slate soils resulting in exotic spicy earthy with some tropical fruit flavours all at 7.5 alcohol that has aged so well. Also his more forwardly Villa Wolf Estate in the Pfalz acquired in 1996 on chalky soils with rounder textures showing in 2003 Wachenheimer Belz Riesling Spatlese at 11 alcohol.

Therefore it was a pleasure to see Ernst back to Vancouver last month on June 15 for a sommelier tasting of some of his better wines. It was nostalgic to raise with him that memorable bottle tasted of his 1981 Wehlener Sonnenuhr that he left in barrel for 27 years before bottling in 2008 and according to Ernst mysteriously just keeps getting fresher and fresher with age. Surely that steep rocky purest blue slate soil in the Mosel from very old vines has something to do with it along with that long barrel aging. Their new release of outstanding balanced vintage 2016 Grosses Gewachs (“great growth”) always dry from Grosse Lage (Grand Cru) vineyards also are impressive and most age worthy. Like those larger bottles available in magnum size!  Check these out for a special treat.