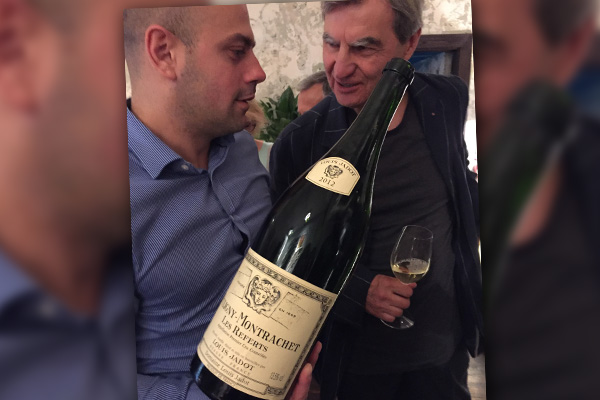 Your scribe is an enthusiastic supporter of all Paulee events. These always offer a chance to meet winemakers and fellow wine collectors with an opportunity to share a variety of top Burgundies. The original one La Paulee de Meursault is a long exciting Monday lunch as the final part of Les Trois Glorieuses held on the third weekend each November and has become an important international wine event. Your scribe has been fortunate to taste many memorable bottles there. This has inspired many other versions including those hosted by American sommelier Daniel Johnnes as La Paulee de New York & La Paulee de San Francisco. Montreal celebrated their second edition at the end of April this year. Many branches of La Confrerie des Chevaliers du Tastevin hold their own local Paulees including an outstanding yearly one held each August in Vancouver with a specific theme bottle to bring along – this year any vintage of Grand Cru Chablis. So it was with great anticipation to attend June 22, 2017 the first La Grand Paulee at Cabotte Burgundian restaurant 48 Gresham Street in the East End of London to finish up their inaugural londonburgundyweek.com. Check out the site for more details on the events, the winemakers, and merchants. What a wonderful final evening!

Wines: Beautifully orchestrated by Master Sommeliers Gearoid Devaney & Xavier Rousset. So thrilled to taste so many top Burgundy wines and managed to scrawl short notes on 31 0f them (9 white & 22 red) as they were passed around:

2006 Meursault Coche-Dury: Only an AC wine but so elegant balanced and complex. Arguably the top white for pure class.

2014 Chambertin Clos de Beze Lucien Le Moine: Power & potential. So impressive for aging. Would like to have in cellar.

1985 Roumier Grand Cru Mag: Served blind in a decanter. Brown colour + light sediment. Lean but stylish. Told it was a Roumier Grnad Cru. Never saw what it actually was. Doubt a Musigny or Bonnes Mares. Maybe Charmes or Echezeaux?

1985 La Romanee Dom. du Comte Liger-Belair (or Bouchard): Lots of sediment but exquisite! Pure charm & class so harmonious. Never saw the bottle and just told it was La Romanee but not the producer.

1971 Clos de la Roche Armand Rousseau: So intense for 35 years old. Perfumes at a level above most. Long special flavours!

2009 Latricieres Chambertin Dom. Duroche: A baby but love that ripe 2009 fruit with ethereal aromas. Buy this.

Another really marvellous Paulee! Congrats. Please continue with your second one in London next year!

Have you attended a Paulee?