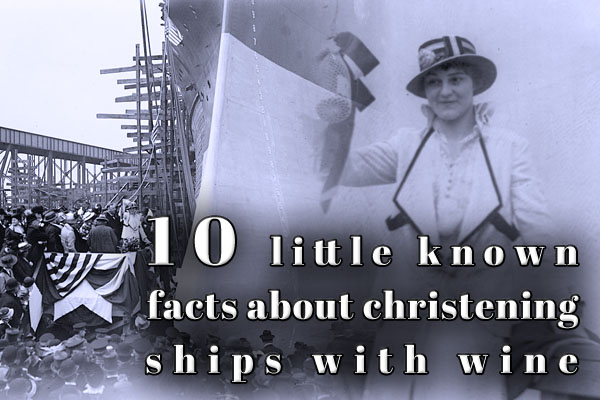 While today we often associate the ceremony of christening a ship with a bottle of champagne, the practice of smashing bubbly for good luck has only been used for the past 170 years or so. For centuries, long before sparkling wine ever existed, ships and vessels were christened with nature’s holiest drink in hope that the Gods would bless the captain and crew as they began their long voyage across the seas.   And below you can read about ten little-known facts that will shed some light on this historic ritual that has evolved greatly over thousands of years.  Cheers!

1. During ancient times, a priest would offer a libation to the Gods in the form of wine.  This was done by pouring it on the ship or in the waters that would soon receive the vessel.
blank

2. Beginning in the tenth century, some ships were christened with the blood of sacrificial victims.  This practice was later seen as extremely barbaric, resulting in red wine being used instead.
blank

3. The church objected to the use of red wine, viewing it as an affront to its sacraments.  Because of these objections, white wine — and later champagne was used for christenings.
blank

4. In 1797, the USS Constitution was christened with a bottle of Madeira – one of the preferred alcoholic beverages of the American Revolution.
blank

5. By the mid-18th century, France began using champagne, the “aristocrat of wines” to christen its ships.  The practice of using bubbly quickly spread to other countries.
blank

6. In 1843, SS Great Britain, the world’s first modern transatlantic liner, was christened with champagne.  When the first bottle missed the ship, Queen Victoria’s husband Prince Albert quickly grabbed another bottle and threw it against the bow.
blank

7. It is believed that if the christening bottle doesn’t break or if a ship isn’t christened at all, bad luck will haunt the vessel.  One passenger liner that skipped the ceremony was the Titanic.
blank

8. In 1890, the Maine, America’s first steel battleship, was christened in front of 20,000 people at the U.S. Navy Yard in Brooklyn, New York.  This ceremony, however, did not prevent it from sinking after a mysterious explosion in Havana Harbor, leading to the Spanish-American War in 1898.
blank

9. During prohibition from 1920-1933, American war ships were christened with water, juice and apple cider instead of wine.
blank

10. In 1942, opera singer Marian Anderson christened the Booker T. Washington, the first U.S. ship to be named after an African-American.
blank