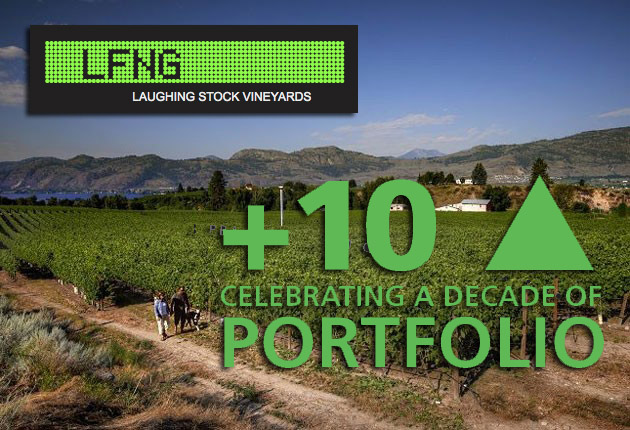 There is a quality winery Laughing Stock (www.laughingstock.ca) on the Naramata Bench in the Okanagan Valley of British Columbia that deserves more recognition. Consultants in the investment business who switched to wine now finds Cynthia Enns the family vineyard manager and her husband David Enns is the winemaker. There were 100 wineries in BC when they started with their first vintage of 2003 but now the industry has exploded to over 273 today. The 37th Vancouver International Wine Festival (VanWineFest.ca) showed 170 wineries from 14 countries spotlighting Australia as the 2015 theme country. Still it was a wonderful opportunity for the Enns at a popular seminar moderated by this writer to spotlight a 10 year vertical of their amazing Bordeaux blend called Portfolio. Here are some brief impressions of the wines served:

2003     64 merlot 33 cabernet sauvignon 3 cab franc. Only 500 cases of a very hot vintage of 1494 degree days with nearby forest fires is on a ripe stewed slightly alcoholic plateau with smooth textures of merlot for best drinking now. Only 8 Tons from 3-10 year old vines.

2010     32m 42cs 6cf 18m 2pv. Most cabernet sauvignon with cooler fruit and harder edges of power and concentration. Will improve.

Exciting progress already made with amazing quality in the cellars of ripe consistent fruit from both 2013 & 2014 in the pipeline. Get in line to order.

Like the non interventionist policy used by the Enns with low sulphur, little racking, no fining, no filtering, tight grain aged French oak staves and not over oaked. Cab franc doing well in picking up oak early from 500 litre puncheons.

The Global focus for the latest Festival was 170+ expressions of Syrah-Shiraz from the Rhone to the Barossa. However Laughing Stock also makes a fabulous one and 2012 Syrah which is their 5th release with 4% viognier certainly brings the ripe cool fruit of Northern Rhone and Cote Rotie to mind.  Recommend you check this winery out for these excellent wines!