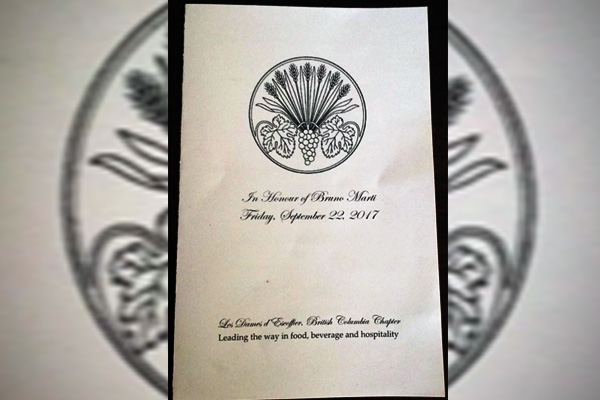 Vancouver is blessed by so many talented chefs. One who has been at it the longest and really has contributed immensely not only in Vancouver but across Canada and internationally is Bruno Marti. He was captain of the Western Canadian culinary team back in 1976, on the Canadian team winning gold at the 1984 Culinary Olympics in Frankfurt and manager of Team Canada in 1996 winning 3 more gold. It was Bruno who your scribe arranged to coordinate all the chefs involved for the 50th anniversary IWFS Festival held in Vancouver in 1983 who made sure that no food item would be duplicated on any menu. From his early days as catering manager of CP Air to operating his own esteemed restaurant La Belle Auberge in Ladner British Columbia, Bruno has seen and done it all as a chef. He has been actively involved in the judging process for the Bocuse d’Or for over 20 years and is even a member of the American Academy of Chefs Culinary Hall of Fame! One of his greatest contributions has been the conscientious mentoring of so many younger chefs. So what could be more appropriate then holding a recognition dinner honouring Bruno cooked for him and his admirers by some of those wonderful talents. On Friday September 22, 2017 Les Dames d’Escoffier, BC Chapter did just that at the Four Seasons Hotel with nearly 130 people seated at one long table with a detailed history of his illustrious career at lesdames.ca. Some of the dishes even included spinach which may be Bruno’s favourite ingredient. Attached is the memorable menu. Congratulations and many thanks Bruno! 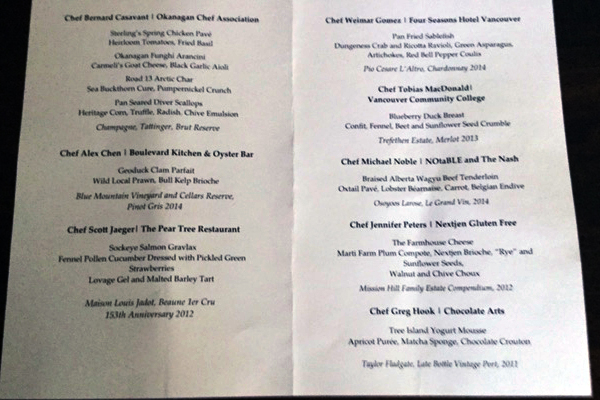