How to say “Champagne” without saying Champagne 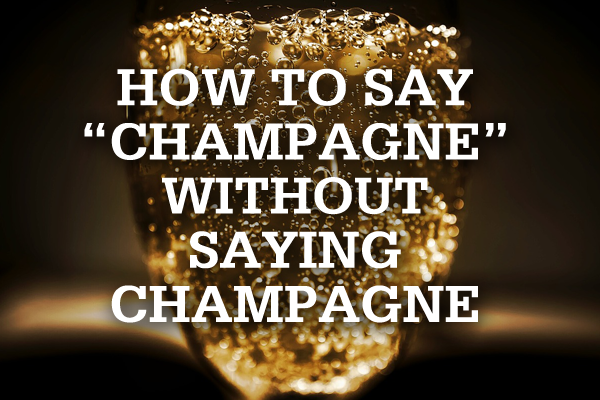 It’s no secret that the French view their wine as sacrosanct. From Bordeaux and Burgundy to Champagne and Côtes du Rhone, the soil that has given us some of the finest vintages is deeply embedded in the culture of every citizen across the Fifth Republic. And when it comes to bubbly, the vineyards of Champagne are held in the highest regards, having survived numerous invasions and wars over the past two millennia.

So when someone erroneously asks for or praises a glass of “American Champagne” or “Italian Champagne,” you can see why both French winemakers and citizens would get upset. Fighting back against this mislabeling, the government of France has applied diplomatic pressure for centuries to stop the use of this word unless the sparkling wine is specifically made in the region of Champagne. As one famous example illustrates, the French delegation led by Prime Minister Georges Clemenceau successfully protected the Champenois during the 1919 Paris Peace Conference with Article 275, which stated that “the importation, exportation, manufacture, distribution, sale or offering for sale of products or articles bearing regional appellations inconsistent with such law or order shall be prohibited.”

But nearly a century later, the Champagne label is still being misused and abused. To understand the loopholes and clever tricks that have been employed for hundreds of years, have a look below to see how you can say “Champagne” without saying Champagne.

Although the United States signed the Treaty of Versailles, the Senate never ratified it, making America null and void from Article 275, which has led to many “American Champagnes” over the years. However, in 2005 the U.S. And European Union finally agreed that labels like this one would no longer be tolerated—with an important catch. If any winemaker used this term before March 10th, 2006, they would be grandfathered in, a decision that caused Korbel Natural Special Inaugural Cuvée California Champagne to be served at Barack Obama’s second inauguration in 2013.
blank

In addition to false labelling, the Pleasant Valley Wine Company took it one step further in the nineteenth century when they lobbied the federal government to change the name of their hamlet. So when people saw Great Western Champagne as being from Rheims, it’s because the wine was actually made in Rheims—New York!
blank

3. Deny its Champagne … over and over again.

If you’re a WWII veteran who fought during the Italian campaign, then you probably developed a taste for a sweet sparkling wine known as Asti Spumante. Unfortunately, its reputation has taken a nosedive in the years following the Second World War, with many producers dropping the name Spumante due to its negative perception for being a cheap wine. But here’s a great way to piggyback off of Champagne using a rhetorical device: a 1977 commercial where the viewer is told that it’s not Champagne—it’s Asti Spumante. Rinse and repeat.