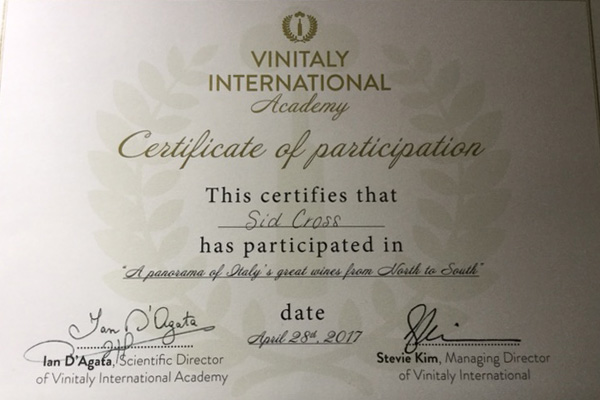 Vinitaly hosts their outstanding annual wine fair in Verona showing some 4000 producers (out of a total of around 75,000) which you should visit with the latest one just held April 9-12. In fact they now have coordinated dates with the Bordeaux Primeurs so you can visit the two events consecutively as they are going to be 3 days apart:

In February 2014 Vinitaly launched Vinitaly International Academy (VIA) and rolled out an annual Certification Course starting in March 2015. By February 2016 they had appointed 55 Italian Wine Ambassadors & 6 Italian Wine Experts from 15 countries. This now has grown from 61 to 86 with the largest representation from China with 13. There is also their new Italian Wine Maestro for the public and much more details on their wine marketing programs at prweb.com.

The Roadshow 3rd edition of the Certification Course launched in Vancouver on April 28, 2017. They will be in New York June 25-30 & China in September. “A panorama of Italy’s great wines from North to South” showing 15 wines from among the visiting wineries was introduced by Stevie Kim Managing Director of Vinitaly International with the seminar conducted by Italian wine expert Ian D’Agata Scientific Director of VIA:

6. Cantina del Pino – Barbaresco Ovello DOCG 2012. Old Estate but their first one 1997 of Ovello at top of hill facing S/SW on sandy soil giving fragrant light on its feet Nebbiolo.

9. Ciabot Berton – Barolo Roggeri DOCG 2010. Very impressive from top hilly La Morra site 300 metres SE exposure clay-calcareous soils and 40 year old vines first aged in French oak and then Slavonia casks. Like that classic balanced structure of Barolo from the 2010 vintage. Ian says best years are 2001, 2008 and 2010. 2009 earlier drinking and 2011 less obvious with some staying power and excelled in Barbaresco better than 2010 (as did 2014). Remember the “tar” needs age to show up in Barolo!

10. Umani Ronchi – Vampo San Giorgio, Conero Riserva DOCG 2011. Their 3rd vintage grown from 800 bottles in 2009 to 4000 in 2011. Montepulciano improving as they learn to tame the tannins by planting in cooler sites for longer hang time to avoid those usual green grape seeds.

13. Col d’Orcia – Brunello di Montalcino DOCG 2007. SE warmer area and lower elevation gives a riper rounder spicier version with some bottle age. Your scribe opened their 1978 last month and it was so exquisitely aromatic and delicate.

Like this educational venture by VIA and pleased to participate receiving my certificate. Good luck with your expanded wine program!