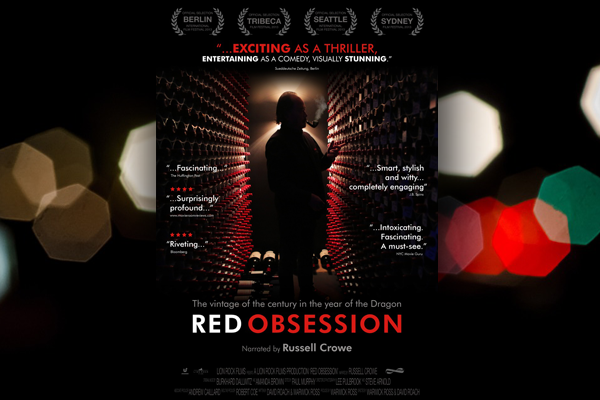 From the legendary vineyards of Bordeaux to the prosperous skyline of Asia’s financial hub, the 2013 documentary Red Obsession is much more than a simple lesson in supply and demand. Through the use of stunning visuals and revealing interviews, the film successfully puts an exclamation mark on China’s insatiable thirst for First Growths—and what it means for the rest of us as this emerging superpower begins to flex its economic muscles. Wine becomes a metaphor as the dragon awakes, ready to shake the world!

Narrated by Academy Award-winning actor Russell Crowe, this Australian-produced documentary begins in Bordeaux, arguably the most famous wine region in the world today. Examining why its terroir is the envy of oenophiles everywhere, the film interviews several heavyweights in the world of wine such as Oz Clarke and Jancis Robinson, who both excel at providing candid yet memorable responses. Indeed, a key strength of Red Obsession is that despite it being tailored toward aficionados, anyone with a casual interest in the subject can watch it without feeling left out. Explaining the climate, soil, and pivotal events such as the 1855 Classification in such a straightforward fashion (and with great cinematography to compliment the narration), the first twenty minutes are an important history lesson that’ll get everyone up to speed.

Moving on to the meat of the film, we travel nearly 10,000 kilometers to Shanghai where we see a booming metropolis showcasing the latest fashions and designs for avid Chinese consumers. Ironically, as time lapse footage shows us a hyper-capitalist society where its people are clamoring for brand names and material goods, it’s so easy to forget that on paper, it’s still officially the People’s Republic of China. Thankfully, the producers provide us with important historical context, allowing us to make the link between the Cultural Revolution of the 1960s and 1970s and the present day. By opening up its markets (and its ideology) to Western culture, a gigantic genie has escaped from the bottle, ready to indulge itself in a hobby that was outlawed only a few decades before by the Communists.

This brings us to the subject of wine collecting, and how China has suddenly taken a strong interest in what Chairman Mao would’ve condemned as a bourgeoisie obsession. As one interviewee explains, in just ten short years, the country has jumped from 1 to a reported 271 billionaires. So with all this disposable income lying around, its nouveau riche have driven prices through the roof when it comes to Bordeaux, and especially the First Growths. Unfortunately, since wine is largely inelastic, French winemakers are increasingly boxed in between their traditional customers in Europe and North America and this new market that is more than willing to bid them up. However, a key watershed moment in the film happens when Château Lafite Rothschild (a favorite amongst Chinese collectors) stamps the number ‘8’ on its 2008 vintage, a highly symbolic number that signifies China’s entry onto the world stage and more importantly, France’s recognition of this new power player.

However, after watching Red Obsession, the whole idea of wine as an investment makes you wonder just how many people have actually drunk the latest “vintage of the century”? With such an impressive return on investment, should we now think of wine (or at least the prominent labels) as an asset in one’s portfolio rather than something to be enjoyed between our friends and family? And with prices skyrocketing over the past several decades, is it any surprise that counterfeiting has also taken off, especially in China? These are the questions I had after watching this film, and questions I’m sure you’ll have too after witnessing the Chinese experience.