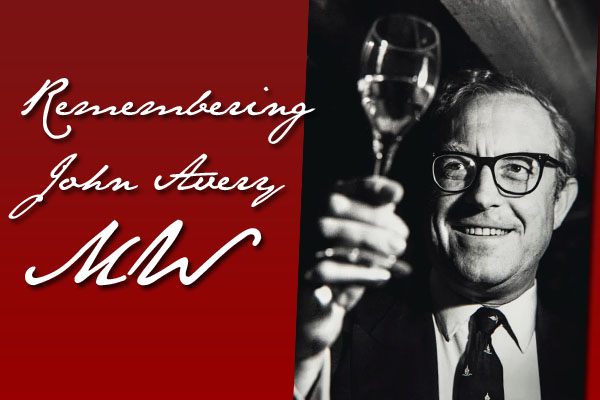 My celebration of the arrival of the new year 2017 included a nostalgic toast to my close friend John Avery who unexpectedly passed away in March 2012. His family connection to the wine trade went back generations to the 1793 start of wine merchants Avery’s of Bristol. John made an impressive warm colourful friendly presence travelling almost everywhere grapes were grown and wine judging took place. One of his greatest contributions was his total dedication to our International Wine & Food Society serving in so many capacities over the years and always providing such sage advice. He was the driving force behind continuing and updating annually our respected Vintage Card and Chart from a single card to a double faced four sided wealth of helpful ratings from wine regions from around the world. Recall so many enthusiastic discussions with him and friendly differences of opinion between us on the overall quality of a vintage. His broad experience plus early studies with on site visits of the emerging New World regions brought John great respect from everyone on the Wines Committee for his amazing wine knowledge.

John was also an outstanding wine taster and collector. He was such a serious student of wine and so intensely curious about every wine he tasted. He was so generous and interested in sharing his classic treasures with you. I related some of these in my Monograph An Appreciation of The Age of Wine (dedicated to his memory 1941- 2012) spotlighting the memorable 1929 Chateau Rauzan-Gassies and Chateau Petrus 1953 (elegant and more approachable) & 1949 (bigger, riper, more powerful) he served me blind in the early seventies while suffering himself that day with a bad cold. Therefore it was with interest that your scribe monitored the recent sale of wines from the Avery Family Cellar held at Christie’s London on October 20, 2016. Among the many highlights from historic vintages were a full case of Petrus 1995, La Tache 1985, Chambertin Rousseau 1990, and the legendary Chateau Latour 1945. Fond memories of helping John to open so many cases of this last wine that had been acquired by Andre Simon himself and served on October 3, 1977 at our IWFS Centenary Convention in London. We both were surprised at how youthful it showed at 32 years of age with such outstanding potential for age worthiness. Just one of so many cherished memories of John Avery MW. We still miss you!