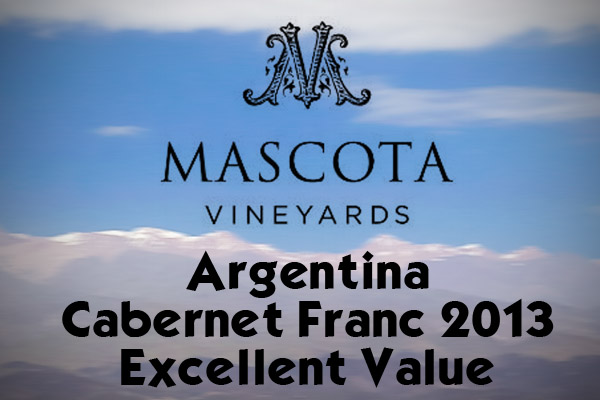 Experienced master winemaker Rodolfo “Opi” Sadler of Mascota Vineyards in Mendoza Argentina is producing some interesting wines at reasonable prices. This has been recognized already by The International Wine & Spirit Competition in London selecting them as Argentine Wine Producer of the Year 2014. Their portfolio of wines uses estate grapes from vineyards in Lujan de Cuyo, Maipo, and Uco Valley. Following on the heels of their Decanter Gold winning Cabernet Franc 2012 is the excellent 2013 from one of their best Estate vineyards Finca La Mascota in Cruz de Piedra of the Maipo Valley in Mendoza, Argentina. When you speak of Argentina you immediately think of Malbec but this vineyard provides amazing fruit for both Cabernet Sauvignon and Cabernet Franc. The latter from an old vineyard averaging 40 years of age (some 70) provides cool fruit yet with a good ripeness aged 12 months in used big barrels (preferred by Opi over smaller 225 litre) that results in a smooth textured structured elegant touch of licorice impressive wine. It is also really excellent value at $15.99 in the Vancouver BC market and worth seeking out as a bargain for the quality delivered wherever you live. Enjoy.

Opi is 3rd generation with his grandfather Austrian who did viticulture in Italy followed by his father buying a winery in Argentina initially for Italian varieties of Nebbiolo and Pinot Grigio. The name OPI is becoming a well known acronym on line for Other People’s Incompetence but that certainly doesn’t apply here where it is affectionately meant as Grandfather in German.

At the same price as the superb 2013 Cabernet Franc are individual varietal wines to check out produced from Cabernet Sauvignon, Malbec and Shiraz (Opi says it should be called Syrah). Check out the popular $14.99 oaky 2014 OPI Chardonnay (French & American oak of 2nd/3rd use). Prefer at $16.99 their first effort at Sparkling Champenoise Method 12 months on lees from 100% Pinot Noir Extra Brut (4-5 grams dosage) from a cooler windy region of Mendoza at 800 metres on clay soil with lots of stones. Labelled non-vintage but it all comes from the 2014 year. Some 2000 bottles are left in the winery still on their lees receiving more bottle aging. I encouraged them with this quality to do some magnum size next time. The 2013 Unanime Grand Vino Tinto Red ($28.99) shows Opi as a brilliant blender from deep stony San Carlos in the Uco Valley fruit of 60% Cabernet Sauvignon, 25% Malbec and 15% Cabernet Franc spending 20 months in new French oak barrels. The Malbec provides a “bigger mid palate” juiciness to the tobacco chocolate cassis flavours. There are also 30 cases of 2013 Big Bat a 100% Cabernet Sauvignon ($61.99) from sandy Altamira at 1100 metres in the Uco Valley with 20 days skin contact spending 18 months in 3000 litre French oak resulting in dark fruits full bodied that will be better with further aging but already received 94 points on JamesSuckling.com

This is a winery from Argentina worth checking out now. Particularly so as our last blog posting of October 28 pointed out that projections this year show Argentina wine production down 35% due to El Nino droughts and flooding. Have you tried any of the Mascota Vineyards wines?