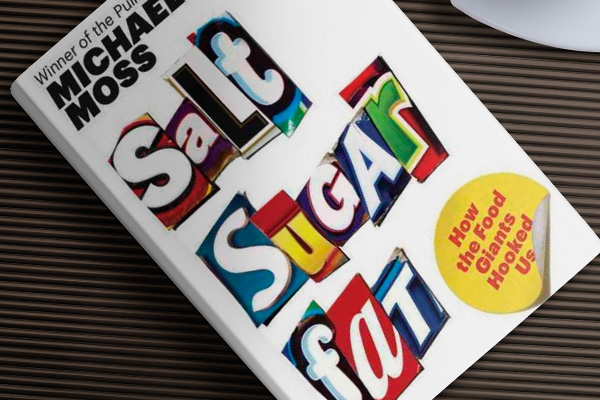 Salt, sugar and fat: the three magical ingredients that have made the food industry billions in profits.  For consumers strolling down the aisles of their local supermarket, it is almost impossible to leave without purchasing something containing at least one of these elements.  From frozen pizzas to fancy cheeses, not only are we buying them—we’re practically marinating in them.  So is it any surprise that America has become (and remains) the fattest country in the world?  Not only is half the population considered to be overweight, studies conducted from 2006 to 2008 showed that the obesity rate amongst children aged six to eleven has jumped nearly 20 percent.

So what responsibility do the companies that produce and market these products bare as diabetes and high blood pressure skyrockets across the nation?  It is a question that Pulitzer Prize winning reporter Michael Moss attempts to answer in his 2013 book Salt Sugar Fat: How the Food Giants Hooked Us.   Tracing back the history of twentieth century food consumption, we learn that without these three ingredients, companies like Kraft and General Foods would not be the powerhouses that they are today.  That’s because on average, we consume 22 teaspoons of sugar and ten grams of salt per day, not to mention all that fat.  But is this the result of clever marketing or are we simply hard-wired to like these foods?  As one Kraft executive told the author, “This is not some big corporate plot to fatten up kids.  This is what kids want.  There are very few kids out there who will eat rice cakes and tofu.”

While human beings definitely have proclivities towards sweets and salty snacks, food scientists have taken it to a whole new methodical level as they come up with the next billion-dollar idea.  As Moss shows us, when it comes to sugar, they use what is known as the “bliss point”—the precise amount of sweetness that generates intense feelings of pleasure in our brains.  It is an exact science where too little or too much sugar can result in a dud that is quickly pulled off the shelves.  Describing this pivotal point, one expert states, “Pleasure from food is not a diffuse concept … it can be measured just as the physical, chemical and nutritional factors can be measured.  With more concrete status, the capacity of food flavors to evoke pleasure may start to be regarded as a real, tangible property of products, along with their nutritional status.”

Indeed, one of the most fascinating chapters of the book deals with the cereal industry, whose sales went from $660 million in 1970 to $4.4 billion by the mid-1980s.  Fueled largely by products that are loaded with sugar (e.g. Apple Cinnamon Cheerios contains 43 percent sugar) and aggressively marketed towards children, Moss aptly names the chapter “Is it Cereal or Candy?”  It’s ironic considering that the first cereals that entered the marketplace in the early twentieth century were designed to be nutritious alternatives to sausages and bacon at the breakfast table.

But as we learn, what works for sugar has absolutely no bearing on fat, an ingredient that has been more successful at flying under the radar with consumers.  In fact, scientists have known for many years that the more fat that is put in our food, the more we like it.  Citing numerous examples, from how it lessens the rubbery texture of hot dogs to how it can turn parched bread into silky loaves, fat is simply a miracle ingredient for manufacturers.  And when it comes to cheese, a food that most people do not identify as a fatty food despite the fact that it swimming in saturated fats, Americans are eating approximately 33 pounds of it per year.  To coin a term from the industry, we all have become “heavy users.”

Realizing that the family unit has changed dramatically over the past fifty years, food companies have also made convenience their biggest selling point.  With stressed-out parents overworked and less likely to make a homemade meal, processed and frozen foods, which usually contain high amounts of sodium, have filled the void at the dinner table.  Again, the research that is presented to the reader is simply fascinating, such as the cost-benefit analysis many parents are forced to make, which plays right into the hands of these companies.  “When you have kids, the question becomes, What can I buy that won’t cost much, that the kids will eat, and that won’t take long to prepare?” asks one study.  “For them the question becomes, how many dishes can you cook with potatoes and carrots before you say, ‘Kentucky Fried is not so bad after all’?”

Coming under fire from various consumer groups and to a lesser extent, the federal government for loading their products with these unhealthy ingredients, food manufacturers have become masters at projecting change even when there is little to none.  As people became more concerned about the negative effects of sugar over-consumption, Kellogg’s quickly changed Sugar Frosted Flakes to just Frosted Flakes. Two percent milk, which implies that it’s 98% fat free doesn’t let you know that whole milk only is one mere percentage point higher.  And many potato chip companies have printed the amount of fat on the label per serving instead of the total amount in the bag.  As you take in all these examples, it will make you think twice before buying a product that is listed as “fat-free” or “low in salt.”

Of course, the central question of the book is what role does the government play?  Some would argue that it is strictly the parents’ responsibility to ensure their child receives a healthy diet.  But with deceptive marketing combined with the fact that mothers and fathers are burning the candle at both ends, do they really have the time to investigate whether or not their child’s attentiveness will increase by 20 percent if they eat Frosted Mini-Wheats—a claim that the Federal Trade Commission said was clearly false and misleading?

Realizing the growing backlash against foods containing unhealthy levels of these three ingredients, Moss gives us a behind-the-scenes account of a meeting held between the food executives in 1999 to discuss the ramifications of their business strategies.  In the city of Minneapolis, CEOs from Nestle, Kraft, Nabisco, Coca-Cola and others met to discuss a possible dim future where their products would be lumped in with cigarettes as hazardous to the nation’s health, preventing them from advertising on television.  With the reader acting as a fly on the wall, it is one of the highlights of Salt Sugar Fat as you witness what could have been a major turning point for the industry.

Overall, Moss succeeds at giving us a candid look at the decisions that go into what we eat.  Through meticulous research, which includes numerous interviews with some of the most powerful players in the business, you start to realize how important it is to be an informed consumer.  With a government that is largely unable and unwilling to help, you’ll probably spend a little more time studying the labels at your local grocery store after reading this important and engaging book.