Dining Before The Destruction 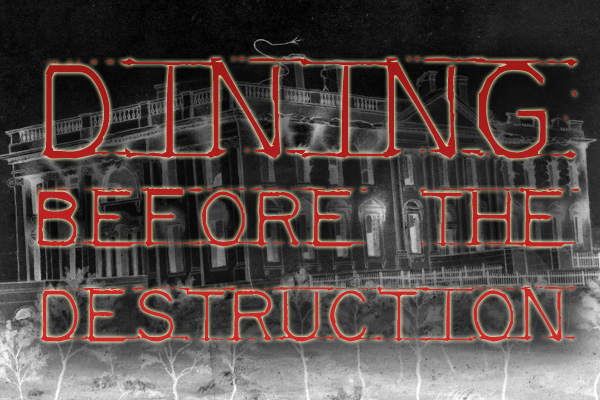 Marching down the dark and abandoned streets of Washington DC on the night of 24 August 1814, thousands of British soldiers had pulled off the unthinkable. Earlier that day at the Battle of Bladensburg, poorly trained militiamen serving as America’s last line of defence proved to be no match against the battle-tested redcoats who were wreaking havoc along the Chesapeake. Retreating from their positions after this humiliating disaster, Britain was now free to enter a helpless capital as the War of 1812 entered its third indecisive year.

With an ambiguous order from London to give the United States “a good drubbing,” General Robert Ross and Admiral George Cockburn would avenge the burning of York (now Toronto) that night by setting most of Washington ablaze. First was the Capitol building, which historian Peter Snow describes in great detail: “They [British troops] piled all the chairs and other furniture, library books and papers on the table and set light to it all. The entire building was soon being consumed by flames, and the Library of Congress which was packed with thousands of volumes of books … was also burned out.”

However, an even greater prize stood on a deserted Pennsylvania Avenue, known back then as the Executive Residence. With most citizens fleeing to either Georgetown or neighboring Virginia, America’s fourth President James Madison and his wife Dolley quickly followed suit by evacuating their home, taking as many items as they could with them, including a treasured portrait of George Washington. Leaving this symbolic residence—only fourteen years old at the time—open for the British to ransack, a tremendous blow against the prestige of the United States occurred that night as orders were given by Ross and Cockburn to burn the beacon of American democracy to the ground.

But before any match was lit, soldiers would wine and dine like never before, helping themselves to some of Mr. Madison’s very best. After all, they hadn’t eaten anything since breakfast.

As a testament to how much blind faith the president and his wife had placed in their troops at Bladensburg, Dolley Madison had her French chef prepare an extravagant feast for forty guests that night at the Executive Residence. So to the surprise of many redcoats, the first thing they smelled as they entered the premises at around eleven o’clock was a warm home-cooked meal. Detailed in When Britain Burned The White House, soldier Harry Smith stated, “We found supper all ready, which was sufficiently cooked … and which many of us speedily consumed unaided by the fiery elements and drank some very good wine also.”

Not surprisingly, several accounts of that infamous night also mention the president’s wine. “Never was nectar more grateful to the palates of the gods, than the crystal goblet of Madeira and water I quaffed at Mr. Madison’s expense,” said James Scott, an officer in the British Royal Navy.

Looking back at the history of America, it was fitting that James Madison, co-author of the Constitution and the Bill of Rights, was well stocked when it came to this fortified wine known as Madeira. Produced on a Portuguese archipelago bearing the same name, it quickly became the preferred drink for American patriots, being one of the few wines to escape the harsh British taxation due to a favorable trade agreement with Portugal. Representing what taxation with representation might look like to scores of would-be revolutionaries, one historian wrote: “Madeira was soon on the way to becoming American by adoption.” And with the wine’s ability to improve while being exposed to the most intense heat certainly appealed to a Virginian like James Madison who would endure many humid summers south of the Mason-Dixon line. But Madeira wasn’t the only wine that British soldiers would have access to that night.

As President Thomas Jefferson’s Secretary of State, Madison benefited greatly from the knowledge he learned from America’s first oenophile-in-chief. The two were known to drink Madeira while discussing policy and just like Jefferson, Madison advocated wine consumption as a healthier alternative to more intoxicating whiskey. So as the reigns of power were passed on to the bookish president in 1809, Pennsylvania Avenue’s wine cellar was still housing some of Europe’s very best wines.

According to one of Madison’s biographers, the cellar was rumored to have over 1000 bottles. Historian Stuart Lebiger writes that it included “Port, dry Lisbon, Sherry, Brazil, Malaga, Cape wine (from South Africa), and wines from Bordeaux (Graves and Haut-Brion), the sweet wines of Frontignac and Barsac, and wine from the Rhone region of France (Hermitage).” It is unclear though whether British soldiers would have a chance to sample any of these wines; looters had entered the property before their arrival and the Madison’s may have even taken some bottles with them as they frantically left town. Of course, whatever remained of the president’s private collection was about to go up in a giant inferno.

After finishing their Madeira and pillaging whatever they could find as a souvenir from this infamous night, wooden chairs were stacked high on the dining room table and soon thereafter, the entire residence was set ablaze. The damage was so extensive that by the time all the repairs were finished, Madison’s successor, James Monroe had become president. Surprisingly, it was an act that was condemned on both sides of the Atlantic; one British paper angrily opined, “The Cossacks spared Paris, but we spared not the capital of America.”

To this day, no reparations have been made for the wine that was drunk that night.