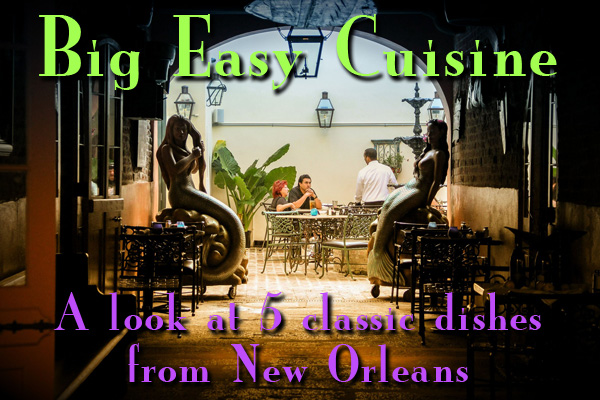 One of the greatest benefits of joining the International Wine & Food Society is the opportunity to travel around the world by attending the various festivals held throughout the year.  Since 2012, members have cruised down the Rhône River, soaked up some sun in Puerto Vallarta and dined in style at our most recent International Festival in Vancouver, British Columbia.

And this year, things are off to a great start as we travel to the city of New Orleans for what promises to be an outstanding culinary weekend.  With images of jazz trumpets, flickering gas lamps and Cajun/Creole inspired foods, the Big Easy is world renown for both its southern hospitality and a proud gastronomic heritage that is older than the country itself.  Writing about Crescent City cuisine, legendary author Mark Twain described it “as delicious as the less criminal forms of sin.”

So for this week’s entry, have a look at four dishes and one drink that were created in the city’s most legendary restaurants, markets and bars:

By Pachango (Own work) [CC BY-SA 3.0 or GFDL], via Wikimedia Commons

No history of New Orleans cuisine is complete without a reference to Antoine’s – a cornerstone of the French Quarter since 1840.  With thirteen different dining rooms and a wine cellar that stores approximately 25,000 bottles, every foodie and oenophile needs to visit there at least once during their lifetime.

Of course, the restaurant’s most famous dish that’s often imitated but never duplicated is Oysters Rockefeller, created by second-generation owner Jules Alciatore in 1889.  Using a rich puree as the secret ingredient that’s been closely guarded for over a century, no one except the current ownership knows exactly what makes these Oysters taste so delicious.  Bottom line: you haven’t tried them until you eat there.

Looking back at the many groups who made New Orleans into what it is today, there is no denying the impact that Sicilians have had on this city.  From St. Mary’s Church on Chartres Street to the annual festivities on St. Joseph’s Day, the fingerprints of southern Italy can be seen all over town.  But in terms of their culinary contribution, look no further than the many Italian-owned grocery stores, some of which are still in operation to this day.  In fact, due to the outstanding quality of food sold in these stores, New Orleans rejected the arrival of big-chain supermarkets for many years.

The most well-known market, which opened its doors for the first time in 1906 is Central Grocery, founded by Sicilian immigrant Salvatore Lupo.  And a big reason for its century-long success is that it can lay claim to being the spot where the famous Muffuletta sandwich was invented.  Consisting of firm-bodied Italian bread loaded with cold cuts that include mortadella and Genoa salami, provolone cheese and olive salad, this delicacy is the quintessential Crescent City dish.  So if you’re looking for that authentic NOLA experience, step back in time and experience what an old-fashioned Italian grocery was like while chowing down on this tasty sandwich.
blank

Without question, there’s no shortage of fine-dining establishments in the city of New Orleans.  But if you’re looking for a bite to eat for lunch or some moderately priced fare, you’ll need to try the world-famous Po ’boy sandwich that is sold all over the city.

According to legend, the dish got its name during a violent streetcar strike in 1929, when a sympathetic sandwich shop owner fed striking rail workers or “poor boys” as he called them for free during the entire dispute.  Since then, this concoction consisting of French bread filled with either gravy soaked roast beef or fried seafood and showered with fresh toppings has become one of the city’s most popular meals.  Whether you’re young or old, rich or poor, you’ll have to try a Po ’boy when you’re in New Orleans.

Somebody once said that dessert is the whole point of a meal.  And there’s no dessert that’s more synonymous with New Orleans than Bananas Foster.  Created at Brennan’s in 1951 when the restaurant was on Bourbon Street, this is a simple, but satisfying dish of ice cream covered with bananas cooked in a rich brown sugar sauce.  Of course, what makes this dessert a memorable experience is when your server pours rum over this rich dish table side and lights it on fire!

From the Grasshopper to the Ramos Gin Fizz, there are many memorable beverages that were born in the bars of the Big Easy  But no signature drink is more recognizable and timeless than the Hurricane and its distinct vase-shaped glass.  Created at Pat O’Brien’s, known today as the “the Mount Rushmore of bars” in the mid-1940s, the former speakeasy owner stumbled upon something incredible when he decided to unload his rum – an unpopular spirit at the time – by mixing it with fresh lemon juice, passion fruit syrup and crushed ice. Selling it in what has become known as the Hurricane glass, this libation went on to be one of America’s most popular cocktails that extends well beyond the boundaries of the French Quarter.
blank