Ask Sid: Why are high acidity wines so good with food? 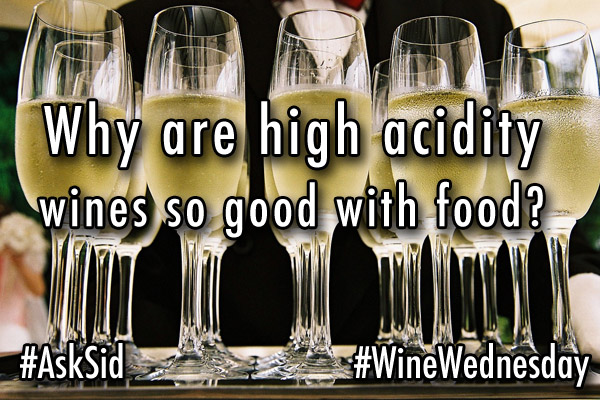 Question: Why are high acidity wines so good with food?

Answer: Not all high acid wines are everyone’s piece of cake especially if you enjoy a softer style to one that is quite tart and vibrant. However, you are correct in my opinion that they generally work very well when matched with food. Probably the most important reason is that they cleanse the palate brilliantly and refresh it every time before your next bite. This is particularly so when paired with heavier, oily or fatty foods. Compare lemon with fish. They also seem to work better with more acidic items like tomato, asparagus, or even artichoke, vinegar and salad dressings. Less acidic wines can be overwhelmed by highly acidic foods. Oysters with Chablis or Muscadet please! Sparkling wines including Champagne usually have good acidity and therefore work well with many food dishes. So do sauvignon blanc or chenin blanc especially from the Loire or German riesling but all those varieties work from other regions too. Barbera with high acidity is a lovely food wine as are many other lighter reds. As a general rule of thumb a wine produced in a cooler climate is likely to have more natural acidity than one from a hotter climate. 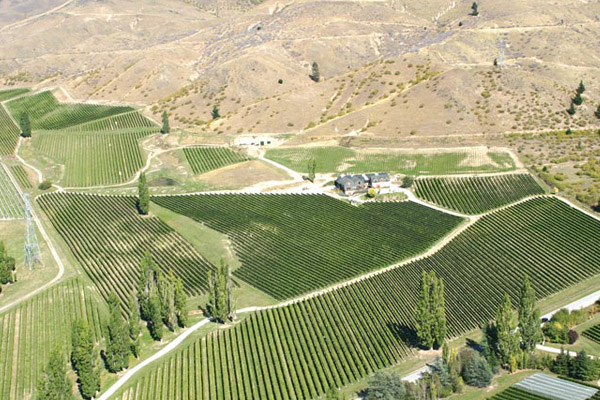 I was recently at an exciting Paulee dinner in Vancouver with many wine producers in attendance represented by Trialto (“Wines of People, Place and Time”) www.trialto.com. I was fortunate to be seated with winemaker Blair Walter of Felton Road Wines www.feltonroad.com in Central Otago New Zealand and Olive & Anthony Hamilton Russell of Hamilton Russell Vineyards in the Hemel-en-Aarde Valley (close to the sea some 75 miles SE of Cape Town, South Africa) www.hamiltonrussellvineyards.co.za. For a Burgundy lover I always feel strongly that these two wineries closely approach the top quality of chardonnay & pinot noir you find there but at much more reasonable prices. I have followed both of these wineries intensively for over 10 years. I continue to be amazed at how balanced and how classy all their wines show every time I try them.

Felton Road was bought in 2000 by an English pinot noir aficionado Nigel Greening who has farmed organically and is biodynamic since 2002. They own Elms Bannockburn Vineyard with northern exposure to maximize the ripeness of the grapes by the sun through that hole in the ozone. Three main vineyards are Calvert, Cornish Point and Elms. They also have their top pinot fruit from Block 3 & Block 5 that definitely should be checked out. Impressive quality control measures from gravity flow rather than pumping, wild fermentation rather than inoculation, subtle oak, natural malo, unfined and unfiltered. Blair brought along some current wines (liked his unfined & unfiltered 2012 chardonnay with that lovely subtle fresh fruit combined with neutral oak in a Chablis-like style) plus a memorable magnum of his concentrated 2007 Block 5 pinot noir that was brilliantly elegant – so pinot! – so fresh! – so complex!

Hamilton Russell brought back our old friends Olive & Anthony who also travelled a long way to Vancouver for this event. Again pinot noir is a star and the magnums served show that typical earthy spicy cherries savoury character from low yields (2Tons/acre) grown at cooler maritime temperatures (averaging 25C) and aged 10 months in French oak (mainly Francois Freres). 2012 produced only 3676 cases of 12 plus some magnums. I am a big fan and frequent consumer of their well priced for the quality chardonnay. Really admire the minerals with wonderful lime-pear of 2012 (here still very tight and youthful in magnum) 93% barrel fermented with 4% stainless and 3% in clay amphorae. So rich and yet stylish with the inherent balance to improve more by aging in the bottle – without resulting premox. Olive has a cookbook out called Entertaining at Hamilton Russell Vineyards. An interesting conversation with Anthony last month reported on the Travel Curious Often site you can reference here: http://travelcuriousoften.com/may14-curious-thirsty-extra.php

A glowing endorsement from me for both these wineries. Have you tried the chardonnay or pinot noir from either one?

Mafia Dons and their favorite foods 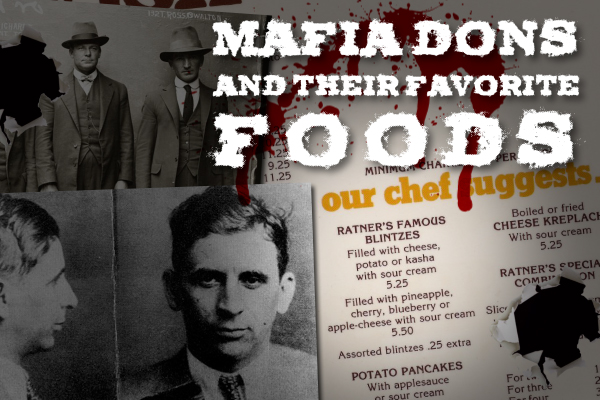 For most of us, our knowledge of organized crime comes largely from movies and television.  Films like The Godfather and HBO’s The Sopranos are etched in stone as pop-culture landmarks while terms such as Consigliere, Capo and La Cosa Nostra are now in the lexicon of wise guys and civilians alike.

And of course, an element that runs constant through all of these mafia flicks is food.  Who can forget Paul Sorvino’s character in GoodFellas slicing garlic cloves razor-thin in preparation for a big prison meal alongside Ray Liotta?  Or how about all those big family dinners at the Soprano household?

But what dishes did the real crime bosses enjoy?  Was it more than just a stereotypical straw-wrapped Chianti bottle served with some macaroni and gravy (i.e. spaghetti and tomato sauce)?  Below are five dons and their favorite foods–some of which may surprise you. 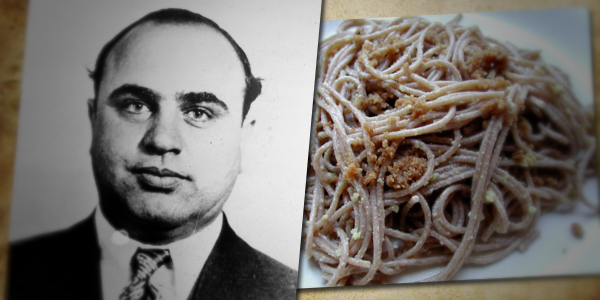 Al Capone, the most iconic and ruthless gangster or the 1920s and early 1930s loved his spaghetti.  At his Prairie Avenue home on Chicago’s South Side, he gladly traded his fedora hat for an apron, preparing extra long noodles with a glass of prohibition-era wine in his hand.  However, his favorite dish wasn’t served with traditional tomato gravy, but with walnut sauce – a simple oil and bread [crumb] base with toasted nuts and a smattering of cheese.  Interestingly it was a more traditional recipe that, after Capone’s death, his sister Maffie sold to Ragu, who used it to make their very first spaghetti sauce. 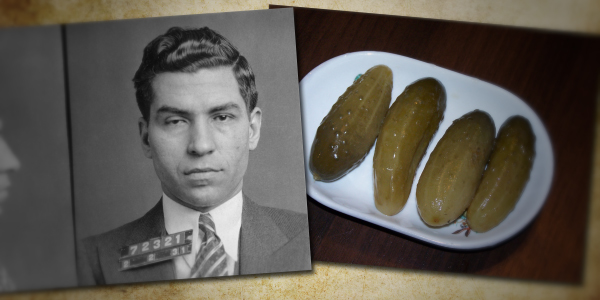 Charles “Lucky” Luciano, the architect of today’s modern-day mafia differed from the old-school bosses known as “Mustache Petes” by welcoming both Jews and the Irish into the world of organized crime.  Battling against a strict 100% Italian organization with a centralized command, the resulting Castellammarese War of the early 1930s drastically changed the mob’s structure into a council of decentralized families with Luciano at the helm.

Having a close relationship to Jewish gangsters like Meyer Lansky and Benjamin “Bugsy” Siegel, its no surprise that Luciano’s favorite food were Kosher Green Pickles – a Jewish delicacy served alongside corn beef sandwiches on the mean streets of New York City.  In fact, when Lansky and U.S. Naval Intelligence visited Luciano’s prison cell to enlist his help in the war effort by monitoring NYC’s ports for any possible sabotage (and later, assisting with the Allied invasion of Sicily), they brought him a hamper of food containing, among other things, his favorite pickles. 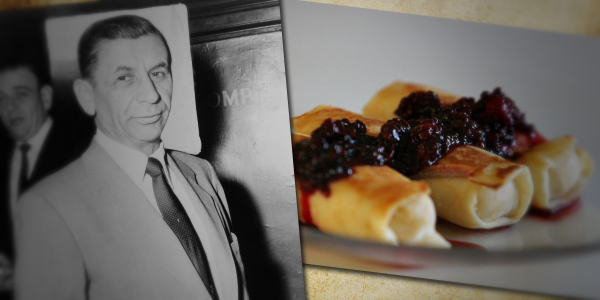 Meyer Lansky, the mafia kingpin who transformed Cuba into a gambling and tourist mecca during the 1950s began his criminal career in the crowded ghettos of New York City.  During his time in the Big Apple, Lansky was a well-known patron at Ratner’s, a kosher dairy restaurant on the lower east side.  Along with Luciano and Siegel, the three plotted together while “The Little Man” would chow down on his favorite dish – Cheese Blintzes – usually a sweet cheese mixture wrapped in a thin delicate pancake, often served with fruit. 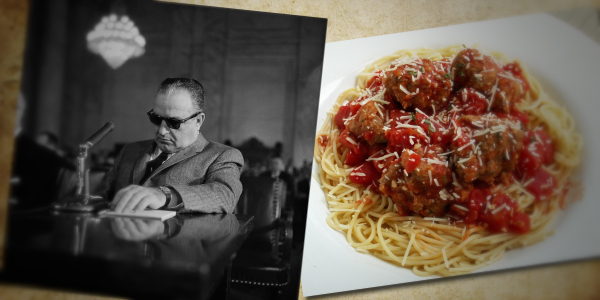 Carlo Marcello, the ruthless New Orleans mafia chieftain who confessed to having President John F. Kennedy assassinated liked to fuse his Sicilian culinary heritage with some iconic Crescent City cuisine.  Among his preferred dishes were oysters, shrimp, fettuccine and his personal favorite – spaghetti and meatballs.  What many might not know is that Marcello’s personal chef was Provino Mosca, who worked exclusively for Al Capone during his time as the undisputed crime boss of Chicago.  According to historian Stefano Vaccara, the Southern Mafioso hired him on the exact day that Capone was arrested and sentenced for tax evasion. 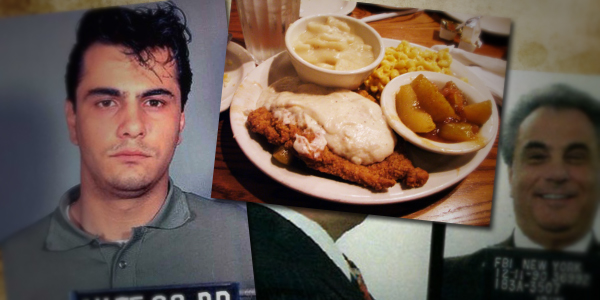 John Gotti, the “Dapper Don”, earned a reputation for being both ruthless and stylish during his tenure as boss of one New York’s most powerful crime families.  But while he enjoyed wearing only the finest Italian suits in front of the cameras, his favorite food will surprise you, as it doesn’t live up to the high standards with which he is often associated.

According to Jeffrey Goldberg of Slate.com, Gotti enjoyed dining at the Cracker Barrel restaurant chain, chowing down on chicken, biscuits and chicken-fried steak.  Confirming the story, a source close to Gotti replied, “Look, how much Italian food can you eat?”

Ask Sid: What’s the best way to cleanse your palate? 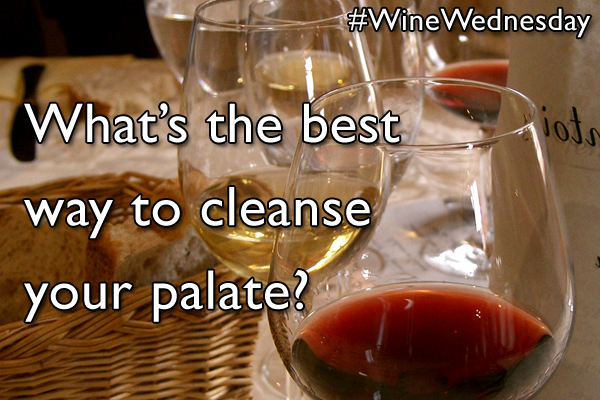 By No machine-readable author provided. PRA assumed (based on copyright claims). [GFDL or CC-BY-SA-3.0], via Wikimedia Commons

Question: What’s the best way to cleanse your palate?

Answer: This is very personal and unique to every person. What you are trying to achieve is refreshing your mouth to give the next wine a new fresh independent opportunity not influenced by the wine tasted just before it. Saliva does quite a good job on its own. After many wines neutral water or plain bread or crackers helps with the build-up of tannins and refreshes you. A friend of mine likes  special olives. Not me.

Your nose can get fatigued too. Some of us wine judges sniff the water vapours from a water bottle to keep our nostrils moist. At the International Chocolate Awards judging chocolate does linger on your palate more than wine and there we use an effective “soupy polenta” that works well. 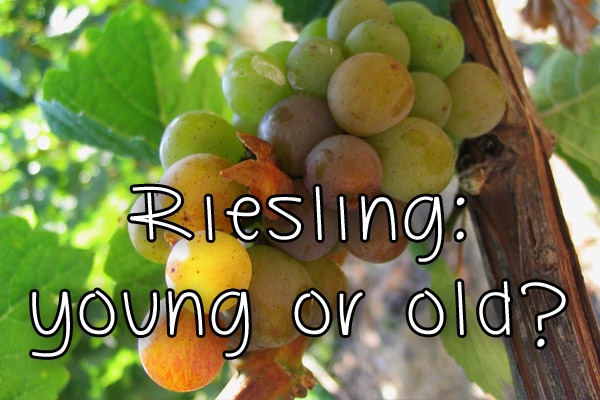 Riesling is hot. Another couple of tastings last week included a wonderful perspective of Germany’s Saar vineyard Ockfener Bockstein with third generation vintner Nik Weis who runs the St. Urbans-Hof estate. His grandfather in 1947 identified the successful Riesling clone 21B (now called the Weis clone) which later found its way into Canada at Vineland Estates in Ontario and planted in 1978 at BC’s Pinot Reach (now Tantalus old vines). Nik repeats that the 3 most important factors in a great Riesling are: “balance, balance and balance!”. He believes “residual sugar should be present in a way that doesn’t really show but brings out the fruit and balances the acidity.” He uses an analogy of the right amount of salt in a perfectly seasoned food course or the lemon juice on a fish dish. In the seventies and eighties excessive sugar was sometimes there to cover other faults in the wines. One of the most challenging decisions of winemaking is knowing when to naturally stop the fermentation at the best alcohol and sugar levels.

The Okfener Bockstein estate is a special place on very steep southwest facing hard gravelly gray slate soil where they bought more land in 1989 with now a total of 6 hectares (15 acres). Wines have a distinctive smoky minerality with the cool winds contributing more flower aromatics and preserving flavours in the grapes. Nik calls it “a smoky floral nose like Silex fume sauvignon in the Loire with additional elements of thyme, elderflowers, violets, roses, lavender, lime, lemon, apple and peach”. Matched with a special Four Seasons Hotel dinner we sampled over a dozen examples from fresh young 2012 back to complex older 1990. 2001 Kabinett was a “true one” while many Kabinett these days are really lighter Spatlese. Really enjoyed the complexity of 2002 Spatlese at only 7.5 alcohol which had more acidity than 2007 (riper 8.5 alcohol) yet seemed younger fresher and more vibrant even though 5 years older. 1990 Auslese another winner with high acidity year allowing the wine to remain so fresh. 1999 stylish but more botrytis showing nuts with dried fruits. 2003 riper more residual sugar higher alcohol 9 and seems softer to me. Nik said he just opened the 1952 which was fresh. He affirmatively states their 2002 & 2003 Spatlese or Auslese can age 40 years easily.

As we discussed last week do you prefer Riesling dry or sweet? Now a follow up question asking if you prefer your Riesling young or older – or at any delicious age!