Welcome to the new Cross-Blog!
Hope this can be an informative interesting rambling journey about wine & food posted on a weekly basis every Monday for IWFS members.
Time to look back on my Top 10 interesting wines of 2012:
10. 2007 CONO SUR 20 BARRELS PINOT NOIR
Dependable versatile juice in a limited edition using best grapes from their El Triangulo Estate in the Casablanca Valley of Chile. Winemaker Adolfo Hurtado and crew make 6 different pinot noirs all good value but this one and Ocio are world class made in a separate winery with unique shallow ” swimming pool” shaped fermenters. Bought several cases on sale for $25 and enjoying every bottle as a house wine with roasted quail or chicken.
9. 1991 ROBERT MONDAVI CABERNET SAUVIGNON RESERVE
Fav since release for the balance, elegance and complexity. Still shows class in blind vertical next to the 1990 – though 1974, 1987 (better than 1985) and 1997 also shone brightly. Bring on the lamb dishes.
2002 Screaming Eagle, 2002 Colgin “Cariad” and magnum 1994 Harlan not too shabby in 2012 as well.
8. 2008 CATENA ZAPATA MALBEC ARGENTINO
All Argentina Malbec is much improved and no one is doing more than the
Catena family led by Laura. Their special high altitude vineyards of Adrianna & Nicasia accentuate the terroir in all their excellent wines but this one has dramatic concentration with cloves, mocha and wonderful oak integration. Also look for their Alta line for quality chardonnay and cabernet sauvignon and entry Catena level.
7. 1989 CHABLIS LES CLOS GRAND CRU DOMAINE LAROCHE
Love Chablis with Seafood – especially fresh Dungeness Crab. This showed maturity and richness next to the 1990 with all others in the Les Clos vertical being younger and all from William Fevre (an outstanding producer) but needing more cellaring. Put some spectacular 2010 from Fevre or Christian Moreau away in your cellar!
6. 2004 FOXTROT PINOT NOIR
First release from small quality producer in Naramata, Okanagan Valley, Canada. An amazing surprise because partially maceration carbonique and not the great winemaking of recent vintages. Nevertheless maturing well and showing exotica with almost a wispy DRC Oriental spice. So many unknown BC pinots to get to know including Howling Bluff, Reimer, Quail’s Gate, Cedar Creek and more. Also from Ontario check out
Tawse, Le Clos Jordanne and others.
5. 1999 SPERSS BAROLO ANGELO GAJA
Enjoyed this with the 72 year old great man himself and it was stellar with oxtail ravioli
and bagna cauda. Also outstanding that night his 1999 Sori San Lorenzo! Also a powerful 1978 Giacomo Conterno Barolo Monfortino finally coming through the tannic structure.
4. 1986 CHATEAU MOUTON ROTHSCHILD 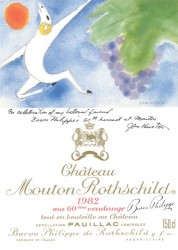 Last of the classic Moutons in the 1961 and 1945 style. The 1982 served with it was more charming soft and cedary but the aristocratic cedary balance of this ultimately best. A 1961 Chateau Palmer – one of the best wines every made – showing a touch too much earthiness but still exquisite and the 1981 Chateau Margaux (clearly the wine of the vintage) strong runners up.
3. 1999 MUSIGNY VIEILLES VIGNES COMTE DE VOGUE
Jean-Luc Pepin described it well as ” an iron fist in a velvet glove”. Brilliant.
More drinkable among all the DRC, Rousseau Leroy bottles tried was the unbeatable 1985 Clos de Tart!
2. 1979 KRUG CHAMPAGNE
Initially released as underrated fresh rather light and acidic bubbles this has now blossomed into a really spectacular Kruggie treasure. So much fuller and so very well balanced. Another 1928? Many improved sparklers around the world now but can’t beat the complexity of Champagne! Other greats in mag included 1990 Pol Roger, 1990 Veuve Clicquot La Grande Dame & 1990 Dom Perignon.
1. 1989 CHATEAU HAUT BRION
What can you say. So fantastic in the elegant, earthy, tobacco drinkability. Wow!
Tried against the 1989 La Mission which was in a photo finish for the win and even though more masculine and powerful presently showing less finesse and less delicious. Both can still improve with time in your cellar!