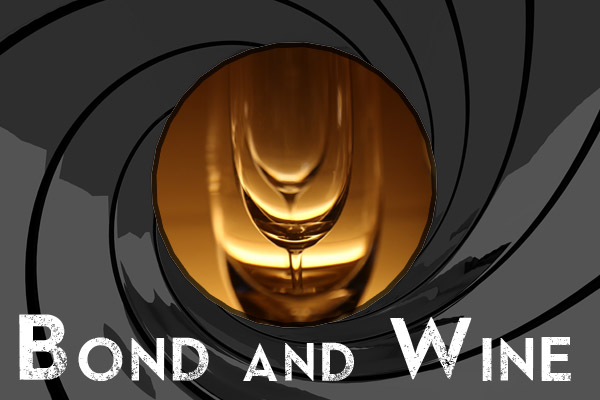 Earlier this month, Spectre, the twenty-fourth installment of the James Bond series debuted in movie theaters across North America. Spanning more than fifty years, this enormously profitable franchise has raked in over six billion dollars in box office receipts ever since Sean Connery starred as 007 in 1962’s Dr. No. Featuring exotic locations, gorgeous women and death-defying stunts requiring a suspension of disbelief (see Moonraker), the James Bond character has sustained his enormous popularity with movie going audiences for over half a century. Daring yet culturally sophisticated, the British spymaster is known for many things: fine-tailored tuxedos, a Walther PPK and of course—Martinis, shaken not stirred.

A drink request that is now part of the popular lexicon, Bond has become synonymous with this legendary cocktail. But often overlooked is 007’s passion for fine wines, which is evident in both the Ian Flemming novels as well as the numerous motion pictures from Connery to Daniel Craig. With the expert knowledge of a seasoned sommelier, Bond has put his skills as an oenophile to good use, whether it’s stopping the bad guys or seducing the ladies.

A quintessential example can be seen in 1963’s From Russia With Love. Traveling by train on the Orient Express, Bond has dinner alongside a beauty named Romanova and an assassin who calls himself Nash. Posing as a friendly contact, he blows his cover by committing the ultimate faux pas for wine aficionados. Ordering a grilled sole, the double agent asks for a glass of Chianti to pair with his seafood.

“Red wine with fish—that should have told me something,” shouts Bond as he later battles the armed SPECTRE agent.

And in addition to these food-pairing skills, 007 is quite fond of only the best in terms of bubbly. With the iconic Fontainebleau Hotel providing the backdrop for Bond’s bikini clad mission in 1965’s Goldfinger, even his seductive blonde companion is incapable of luring him back into bed when it is discovered that a bottle of 1953 Dom Pérignon has a temperature above 38 degrees Fahrenheit. “My dear girl, there are some things just aren’t done,” insists Sean Connery who heads toward the fridge with a not-so-subtle jab against the Fab Four. “That’s as bad as listening to The Beatles without earmuffs.”

The ’53 Dom is also referenced in Dr. No when Bond is about to use a lesser vintage as a weapon in his enemy’s underwater lair. “That’s a Dom Pérignon ’55—it would be a pity to break it,” says the evil doctor, which leads 007 to respond with “I prefer the ’53 myself.”

With product placement now a cornerstone of the franchise, many champagne houses have been featured including Veuve Clicquot, Krug and especially Bollinger, which is shown in more than a dozen of the post-Connery Bond flicks. One memorable scene from 1979’s Moonraker features the popular villain-turned-hero Jaws popping open a bottle with his infamous teeth.

Moving from bubbly to Bordeaux, Bond is able again to unmask his would-be-assassins at the dinner table with their lack of wine knowledge. In 1971’s Diamonds Are Forever, after pouring a bottle of 1955 Mouton Rothschild, 007 comments that “I had rather expected a claret.” When the villain states that they have little claret on board the ship, alarm bells go off since Mouton is from Bordeaux or what the English refer to as claret. So much for posing as an undercover sommelier.

In the book James Bond and Philosophy: Questions Are Forever, the authors write, “He immerses himself in the enjoyment of the best foods, wines and women. The indulgences, which we see in the films, are even more pronounced in the novels—Bond takes such pleasure in the details of creating his own martinis and named them after women, ordering the best caviar, making wine suggestions to the sommelier … He is a true connoisseur.”

Of course, when it comes to drinking the best wines in the world, you only live once—or maybe twice!