10 things you need to know about German Sekt 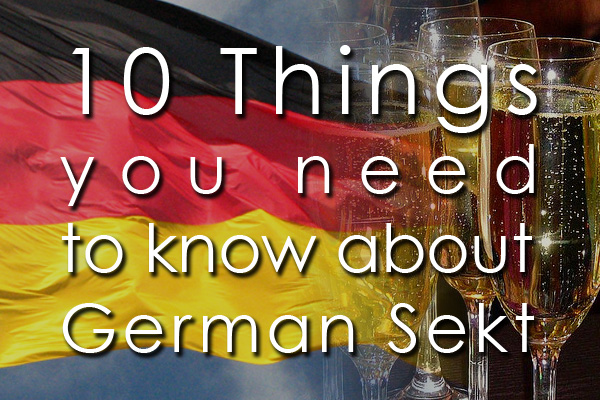 Step aside beer—sparkling wine is taking over in a big way! While sales of suds are falling flat, shipments of bubbly increased by 8% in 2014, according to the Wine Institute. Fueled largely by Prosecco, which saw an astonishing 30% increase over the past several years, sparkling is no longer for weddings and anniversaries as more and more millennials are uncorking it at their dinner tables with no special event in mind.

But besides Champagne, Prosecco and Cava, there is another sparkling wine you should definitely know about. German Sekt, much like its Spanish counterpart has suffered from a reputation for being cheap and lacking in quality—considered by many to be nothing more than carbonated fruit juice. However, these erroneous assumptions don’t tell the entire story about Sekt, which if purchased correctly, can be a real treat. And below are ten facts you need to know before buying this wine.

1. Sekt is usually sweeter and lower in alcohol than Champagne and other sparkling wines. It can contain aromas of apples, pears and white flowers with alcohol levels as low as 6%.

2. After the Treaty of Versailles was signed in 1919, Germany was forbidden from using the name “Champagne.” The generic term “sekt” was used instead.

4. Less expensive Sekt imports bulk wine and grapes from countries such as France, Spain and Italy. These bottles constitute approximately 95% of all sekt.

5. Most Sekt uses the Charmat method for secondary fermentation, similar to Prosecco.

6. Cheap Sekt will not show the vintage or vineyard on the label.

7. Deutscher Sekt means the wine was made using only German grapes such as Riesling. These are considered by many to be some of the best bottles to purchase.

8. Sekt b.A. or Winzersekt (wine grower’s sekt) means it was made from grapes from one of Germany’s thirteen quality regions. Quantities are modest and usually made by smaller estates.

10. Some cheeses to pair Sekt with are ones with soft interior and mild notes such as Brie.