Devilish Delights in the White City 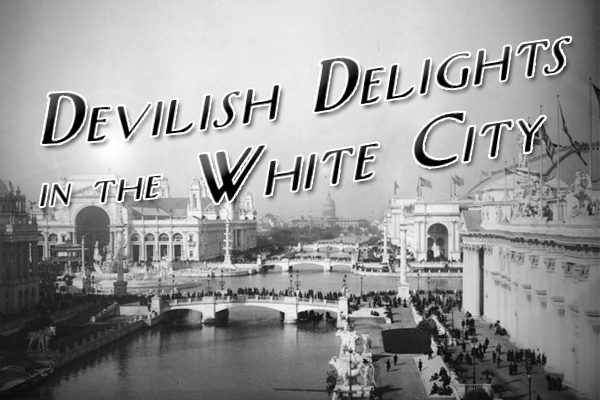 Last month, the doors opened to EXPO Milan 2015, a World’s Fair that runs until the end of October and is expected to attract over twenty million visitors.  With its theme titled Feeding the Planet, Energy for Life, the focus will be on how both countries and individuals can produce healthy and sustainable quantities of food that could end world hunger.

Of course, throughout the history of these fairs, which date back to the late 18th century, food and drink has always been paramount.  From the Bordeaux Classification of 1855 to the modern era where everything from Sangrias to Crawfish burst onto the national scene after being showcased at the fair, numerous expositions have propelled hundreds of little-known delicacies into the collective appetites of millions of Americans.

So for this week, let’s look back at one of the most important fairs in U.S. history—the World Columbian Exposition of 1893, an event held in the city of Chicago that ushered in the modern era. Spread over 686 acres near the shores of Lake Michigan, it earned the nickname “White City” after nearly 200,000 incandescent bulbs—during a time when most Americans lived without electricity—illuminated the fair grounds which contained the very first Ferris Wheel and over a hundred neoclassical buildings featuring the latest conveniences.

But in addition to automatic dishwashers, moving walkways and Edison’s Kinetoscope, many devilish delights were popularized that year in Chicago as twenty-seven million hungry fair goers descended upon the city.  Below are six items that got their first national exposure in Jackson Park and have stayed in our kitchens and dining rooms ever since.

At the beginning of the 19th century, Ohio was the country’s largest producer of wine.  But as America expanded to the shores of the Pacific Ocean, California—with its ideal climate—emerged as a grape growing powerhouse.  And at the Columbian Exposition, many visitors got their first taste of Golden State wines that were sent by local vintners in hope of achieving both national and international visibility.
blank

Outside the various exhibits, a strange new mishmash of caramelized popcorn, peanuts and molasses were sold at a feverish pace.  The combination was so popular with fair goers that in 1896, its inventor, Frederick Rueckheim, patented it with the name Cracker Jack, which went on to become one of America’s most popular snacks for over 100 years.
blank

Ever wonder how Pabst got its famous blue ribbon?  Look no further than the World Columbian Exposition when it took home the award for best suds.  According to author Jerry Apps: “Anheuser-Busch, which had been ahead by five-eights of a point, threatened legal action when the judges finally decided that Pabst should win the blue ribbon.”  From that point on, the victorious Wisconsin brewery marketed its beer as Pabst “Blue Ribbon.”
blank

In addition to Aunt Jemima pancake mix that debuted at the fair, another breakfast item called English Muffins garnered significant attention.  Striking while the iron was hot, S.B. Thomas formed a company that began manufacturing these delightfully airy bread rounds under the name of Thomas’s English Muffins.  Since then, they have been a staple at the morning table and afternoon tea where the nooks and crannies of the signature craters are perfect for capturing every last bit of butter and preserves.
blank

If pancakes and muffins weren’t up your alley, you could always go to the “Coarse and Dry Wonders of Tomorrow Pavillion” where a new machine patented by a Boston lawyer named Henry Perky was churning out what he described as “little-whole-wheat-mattresses.”  Known later as Shredded Wheat, the product would go on to be one of the most popular breakfast cereals of all-time.
blank

When a caramel maker named Milton Hershey arrived at the fair, he was absolutely blown away.  That’s because a German manufacturer from Dresden had demonstrated how to make something called chocolate — a sweet most Americans at that time have never heard of, let alone even tasted.  After sampling this delightful confection, he immediately purchased the equipment used to make it.  And in a very short time, he was able to make chocolate in a convenient bar form that could be purchased by both rich and poor, creating a whole empire based on what he saw that day in Chicago!