10 facts about Prosecco – the sparkling wine that’s taking the world by storm! 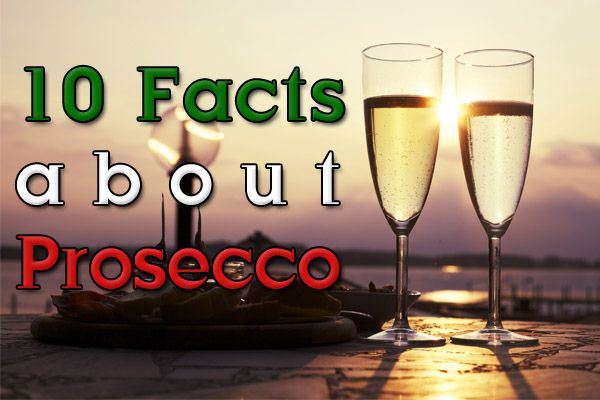 You might have noticed over the past couple of years that more and more people are drinking bubbly Prosecco!  Whether as an aperitif or part of a Bellini cocktail, this crisp, refreshing and cost-friendly sparkling wine has taken the world by storm, outselling Champagne for the first time in 2013 with 307 million bottles!  In fact, Americans imported approximately 2.3 million cases in one year alone–up dramatically from just 500 cases less than a few decades ago.

So for this week’s entry, let’s have a closer look at this delightful Italian wine:

1. DOC & DOCG Prosecco is produced in the northeastern regions of Friuli-Venezia Giulia & Veneto.

2. The two towns known for Prosecco – Valdobbiadene & Conegliano – are both sheltered by the Alps, making the area near and between them ideal for growing Prosecco grapes.

3. Unlike Champagne’s secondary fermentation which takes place in the bottle, Prosecco is fermented in stainless steel tanks, which helps to make it more affordable.

By James Cridland (Flickr: Champagne on ice) [CC BY 2.0], via Wikimedia Commons

By Jessica Spengler (Flickr: Prosecco with raspberries) [CC BY 2.0], via Wikimedia Commons

5. Prosecco is known for its lower alcohol content (usually 11-12%) and its fruity aromas/flavors that can include apple, peach and apricot.

By the_moment (Flickr: prosecco) [CC BY 2.0], via Wikimedia Commons

6. By 2008, nearly 60% of all Prosecco was produced outside its traditional regions in northeastern Italy.

7. That’s because Prosecco was determined by the grape variety and not the place of origin, allowing other countries the right to use the name.

By Sandstein (Own work) [CC BY 3.0], via Wikimedia Commons

8. This worried Italian vintners, who were very concerned that the Prosecco brand was being exploited just as it was starting to take off internationally.

By John W. Schulze from Tejas (Prosecco vineyards) [CC BY 2.0], via Wikimedia Commons

9. So in 2009, the Italian government declared that in order for a wine to be labelled Prosecco, it would have to be produced in a designated region.  Because of this decision, the name of the grape was changed from Prosecco to Glera.

10. When buying a bottle, check the label closely.  The absolute best Prosecco is made near the hills between Conegliano and Valdobbiadene and will be labelled DOCG (denominazione di origine garantita). Bottles with a DOC on the label mean that they were probably made on the surrounding flats.