Bordeaux for beginners: 5 ways to better understand the region 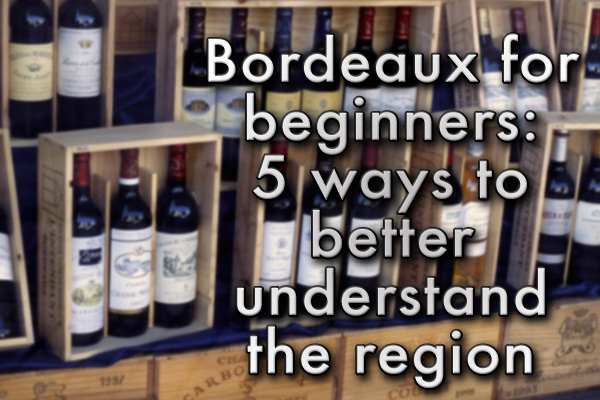 If you’ve started to immerse yourself in the world of wine, it’s almost inevitable that you’ll come across the name Bordeaux.  That’s because with nearly 300,000 vineyard acres, it is France’s largest wine growing region—an area bigger than all of Germany’s vineyards combined and ten times the size of New Zealand’s total acreage.  And matching quantity with quality, it is home to some of the most famous wineries in the world including Château Petrus, Château Margaux and Château Lafite Rothschild.

In addition to centuries of winemaking knowledge, another prime reason for Bordeaux’s continued success is geography.  With its close proximity to both the Atlantic Ocean and several rivers, these bodies of water combined with acres of surrounding pine forests help to temper the region’s climate.  The result is approximately 700 million bottles produced every year from Médoc to Sauternes.

But let’s face it.  If you’re learning about Bordeaux for the first time, things can get quite confusing.  For starters, why aren’t the grapes listed on the bottle like they are for American wines? And what does left bank, right bank and first-growth mean?

Have no fear!  For this week’s entry, we present 5 ways to simplify the Bordeaux region for those who are just starting their journey into the world of wine appreciation. So sit back, relax and learn about one of wine’s most historic and powerful regions.

1. When you say Bordeaux, do you mean red wine?

No.  But according to the latest information from the Conseil Interprofessionnel du Vin de Bordeaux, nearly 90% of the region’s grapes are red.  So it’s not hard to see why many people associate Bordeaux with red wine.  However here’s an interesting fact: did you know that until 1970, the region produced more white wine than red on a regular basis?

Despite this seismic shift to red over the past four decades, you can still find some of the world’s best white wines in Bordeaux—most notably in the Graves and Sauternes areas—the latter being home to Château d’Yquem which is renown for its sweet dessert wines, usually made from Sémillon and Sauvignon Blanc grapes.
blank

2. On the label, it says Bordeaux but doesn’t show the grapes used to make the wine.
Does that mean that Bordeaux is the grape?

No.  Wines from France are named after the appellation where it is grown instead of the grape variety used to make the wine.  If you’re used to drinking American bottles, this can be a bit confusing when trying to figure out if the bottle contains Cabernet Sauvignon, Merlot or some other grape.  Generally speaking, here is the breakdown according to the March 2015 edition of the Wine Spectator:

Just keep in mind that most Bordeaux wines are a blend of two or more of these grape varieties.
blank

Domenico-de-ga at the German language Wikipedia [GFDL or CC-BY-SA-3.0], via Wikimedia Commons

3. My friends that are into wine were talking about the differences between “Left Bank”
and “Right Bank” Bordeaux.  What does that mean?

When you look at a map of the Bordeaux, you’ll notice that it is divided by the Gironde estuary, which is formed when the Dordogne and Garonne rivers meet in the heart of this wine region.  All appellations left of these waterways are classified as Left Bank and those to the right are known as Right Bank.  For a map listing all the appellations in Bordeaux, click here.

The rule of thumb is that most Left Bank appellations are predominately Cabernet Sauvignon while the Right Bank is centered around Merlot.  The exceptions are Sauternes and Barsac, which only grow white grapes.
blank

4. Another term I heard was “first growth.”  What exactly does that mean?

Back in 1855, France hosted the modern-day equivalent of the World’s Fair.  And in preparation for Exposition Universelle de Paris, Emperor Napoleon III asked industry experts to select the best Bordeaux wines to represent the nation.  The result became known as the Official Classification of 1855 with the wines from the Médoc region dominating the list.  Basing their ranking system on the assumption that price equals quality, five different classifications were created, which became known as “growths” with first growths (or Premiers Crus) being the absolute best.  You can view the entire list by clicking here.  So if you’re friends are referring to “first growth,” then it must be either Château Lafite Rothschild, Château Latour, Château Margaux, Château Haut-Brion or Château Mouton Rothschild.
blank

5. Bordeaux seems quite expensive to drink.

Many articles dealing with Bordeaux are usually illustrated with pictures of opulent Châteaus, leading many to believe that drinking wine from this region is a luxury available only to the very wealthy.  And yes, there are many vintages that can run in the three, four and sometimes five figure range such as Château Petrus and many first growths.  But this is a complete misconception about the region.  In fact, wines priced between $8 and $25 represent approximately 80% of Bordeaux’s total production.  Some of these include Mouton-Cadet, Laurentan, Lacour Pavillon and Baron Philippe.