The best and worst in Soviet hospitality: a look at the food and drink of the Yalta Conference 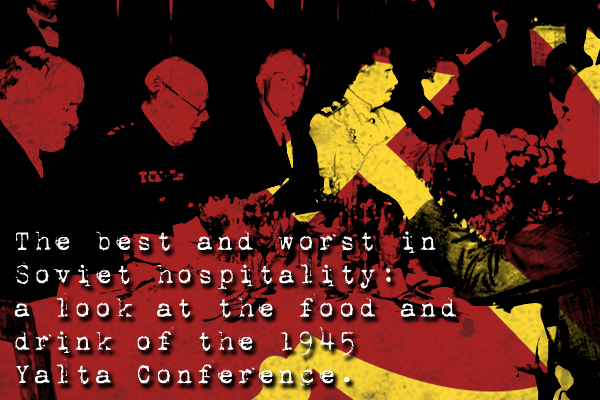 As dawn approached on February 3, 1945, a gravely ill President Franklin Roosevelt boarded his aircraft, the Sacred Cow for a grueling fourteen hundred mile flight to the Soviet Union.  Departing from the island of Malta, sub-zero temperatures were waiting for FDR when his plane landed at the Saki Airfield near the coastal town of Yalta.  His meeting with British Prime Minister Winston Churchill and Marshal Joseph Stalin would be the most important conference of the Second World War as Allied forces inched closer to victory in Europe.  And during their stay, Roosevelt, Churchill and their respective staffs would witness the very best – and the very worst – in Soviet hospitality.

Traveling to the Black Sea in a fleet of Lend-Lease Packards, both western leaders had no idea what lay in store for them.  For almost eight hours, they drove past a plethora of bombed out buildings, rotting animal carcasses, destroyed tanks and torn up railroad tracks.  With a swig of Brandy, Churchill remarked about the location for the conference: “We could have not have found a worse place if we spent ten years on research.”

Utilizing the vast resources of the entire Soviet Union, chefs and hotel workers had been sent from Moscow, bringing as many plates and cutlery that they could carry with them to create the illusion of prosperity in the previously looted Livadia Palace.  A bakery and fishing operation was created onsite to supplement the food brought in from around the USSR. Romanian prisoners of war were ordered to replant the gardens on the property while furnishings were brought in to replace the one’s that were stolen.  Over a thousand men and women had worked tirelessly in the weeks leading up to FDR and Churchill’s arrival.  And when they finally came, the very best in Russian cuisine was waiting for them.

On the first night, Russian chefs had prepared a bountiful dinner that included sliced fish, shashlyk, potatoes and game.  The president’s daughter, Anna Roosevelt enjoyed the food but noted, “each time anything was refused the maître d’hotel looked either like a thunder cloud or mortally wounded.”

What did become a favorite amongst Yalta attendees was lavish caviar, served for breakfast, lunch and dinner.  It was ironic considering that had the Soviet Union not entered the Second World War, the sturgeon that bred those salty black eggs would have been on the brink of extinction.  Dating back to the early 1930s, the original plan was to dam the mighty Volga River for hydroelectricity, which would have prevented the fish from traveling upriver from the Caspian Sea to lay their eggs.  But with Operation Barbarossa, this massive construction project came to a grinding halt, giving sturgeon a vital reprieve.

To compliment the various dishes, bottles from the world-famous Massandra Winery had been shipped back to Yalta.  Originally constructed in the late 19th century for the sole purpose of supplying Russia’s Tsar, the winery’s vast and rare collection of vintages had been evacuated as the Wehrmacht moved closer to Moscow in late 1941.  But with the Crimea firmly in Soviet control more than three years later, the wines were now safe to send back, giving those attendees a chance to taste some of Ukraine’s best.

Another Russian staple placed in each bedroom of the palace was a decanter filled with vodka.  At Yalta, this drink in addition to the numerous gallons of wine and champagne resulted in many inebriated Brits and Americans having to be carried back to their rooms.  The drunkenness during this conference became so infamous that one Republican in congress cited it as a reason to cut off the State Department’s budget for wine, declaring that alcohol had contributed to the “sellout at Yalta.”

Top: Fishermen pose behind a 1,000+ pound Sturgeon. (photo courtesy: Library and Archives Canada) Bottom:  Wine bottles aging in a cellar at the Massandra Winery. (click to enlarge all)

While an enormous amount of effort had gone in to making everything hospitable, Stalin also made sure that he would have the upper hand on his home turf.  During the many toasts between the three powers, the Georgian dictator ordered his staff to refill his glass with water instead of vodka when nobody was watching, staying relatively sober while the others got tipsy. And as Churchill and others complained about bed bugs in their rooms, another type of bug had been listening in on their conversations.  Prior to their arrival, dozens of electronic devices had been secretly planted in all the rooms occupied by the British and Americans during the conference, with any vital information being immediately sent to Stalin himself.

But as these cloak and dagger operations were being carried out behind the scenes, a successful charm offensive had been launched simultaneously by the Soviet Union to please their guests by any means necessary.  In Churchill’s memoirs, he recalls one moment when a guest casually remarked that there were no lemons to go with his cocktail.  “The next day,” the PM wrote, “a lemon tree loaded with fruit was growing in the hall.”  Likewise when Sir Charles Portal noticed that there were no fish in a rather large tank, an aquarium full of goldfish appeared the next morning, flown in by air.  No stone was left unturned in keeping their guests happy and hopefully unsuspecting as they listened in on their conversations.

What took place during the entire conference is well documented.  The dominant western narrative for nearly seventy years has been that in order to get Soviet forces to commit themselves to the pacific theater of operations, Roosevelt sold out eastern Europe to the communists – a narrative that has been argued back and forth by historians for decades.  But what role did the many bottles of wine have on the British and American delegations is a question that is rarely asked?  And did the constant supply of vodka in their rooms result in any loose lips spilling diplomatic secrets while Soviet espionage carefully listened in?  With the Russian archives still closely guarded, we may never know but the role alcohol played at Yalta is something that cannot be dismissed.