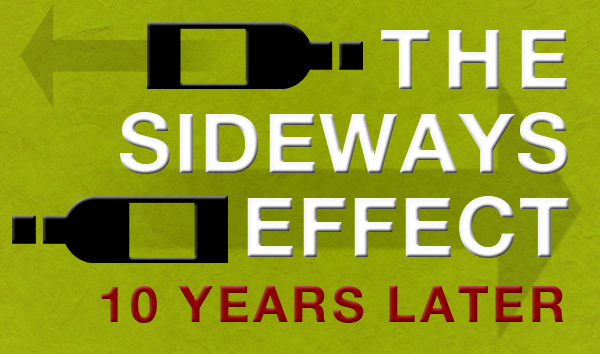 In the fall of 2004, oenophiles everywhere arrived at their local movie theater to watch the Academy Award winning film Sideways.  The tale of Miles Raymond, a failed writer and wine-aficionado traveling through California wine country with his womanizing best friend Jack for an unforgettable week-long bachelor party became a certifiable smash hit, grossing over $100 million dollars in worldwide ticket sales.

With its enormous crossover appeal, anytime someone mentions “wine” and “movies” in the same sentence, Sideways is likely the first flick that comes to mind.  And an astounding number of columns, blog entries and even peer-reviewed academic journal articles have been written about the so-called “Sideways Effect.” Full of anti-Merlot sentiments, one of the movie’s most memorable lines is when Paul Giamatti’s character bluntly states, “if anyone orders Merlot I am leaving. I am not drinking f—–g Merlot!” Throughout the film, Pinot Noir is his clear preference, describing its flavors as “brilliant,” “thrilling,” and “subtle.”

What do you think?  Ten years later, can you still feel the impact of that film whenever you attend an event?  Are you or somebody you know still hesitant to drink Merlot?  Share your thoughts by voting and/or posting a comment below.